To my great surprise, this didn’t suck as much as I’d heard. And that’s saying something, considering my usual tolerance for Sandler’s smug, highly punchable face is about one and a half stanzas of The Chanukah Song. Yes, it’s unquestionably lazy film-making, whose origins in a short film are poorly disguised. Yet, as a slab of nostalgic fun, both Chris and I were adequately amused: I suspect most eighties kids will be similarly entertained. 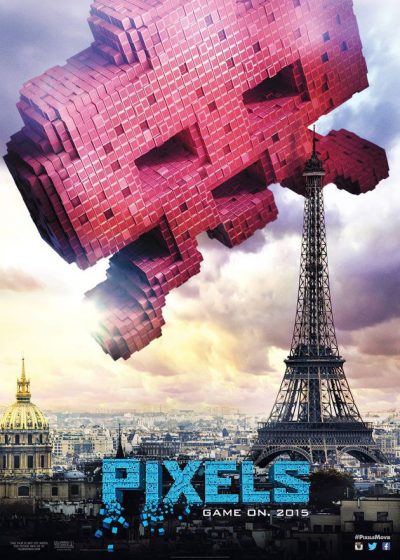 It starts in that decade with the young Sam Brenner beaten into second place at the world video-game championships by Eddie Plant. Three decades later, Brenner (Sandler) is an AV tech guy making house calls, while his pal Will Cooper (James) is the President of the United States. Which is handy, because footage of the championship went into space, and was mistaken by an alien, energy-based species as a declaration of war. They are now attacking Earth in similar form – Galaga, Arkanoid, Centipede, Pacman – in a best-of-five video-game tournament to the planetary death. [No, really. In terms of incomprehensible actions, these aliens are right up there with those in Arrival] Naturally, it’s up to Brenner and his pals to defeat the space inva… invaders from space.

Speckled with eighties pop-culture icons, from Madonna to Max Headroom, I’m forced to wonder what anyone under the age of forty will have made of all this. It seems to be aiming for something in the same area as Ghostbusters [not least in weapons which are strikingly close to proton packs], though needs an awful lot more work on the characters. The only one to make an impact is the adult Eddie Plant, played by Dinklage; if the film had focused on his fall and redemption, it might have been more interesting. Although Sandler’s restraint here is likely welcome: I’ll take bland, forgettable Adam over shrieking, man-child Adam, any day.

Columbus has a sure enough hand on the large-scale action/fantasy sequences, having honed his talents on the first two Harry Potter films. There’s certainly something satisfying about seeing Tetris played with actual buildings, their middle stories evaporating when the row is completed, or Pacman played around the grid-like streets of New York. I wish the film had done more of this, integrating video games into the real world. The climax could then have had Brenner climbing an actual skyscraper, as King Kong rained down fiery destruction from the top, rather than a kinda lame VR imitation.

Despite such mis-steps, I still preferred this to some other movies which use video-games as their backdrop. Wreck-it Ralph, for example, sent me to sleep – likely a defense mechanism against its painfully obvious morality messages. If there are any such here, I can’t say I particularly noticed them, and it’s the better for it. If well short of how what it could have been, it’s also nowhere near as abysmal as some reviews paint it. Let’s face it, their complaints about how dumb it is to have Kevin James as US President, seem almost quaint and painfully 2015 at this point…