So that’s what McG is doing these days: making Netflix Original Movies. How the mighty are fallen, considering his debut, Charlie’s Angels, had the highest opening weekend ever at the time for a first feature. It seems since to have been a descending spiral of development hell (he spent $15 million on pre-production for a Superman film, before deciding he was too scared of flying to go to Australia!), producing TV series and Terminator: Salvation. The projects to which his name has been linked at some point, far exceed his actual directorial output, from Masters of the Universe to 20,000 Leagues Under the Sea. 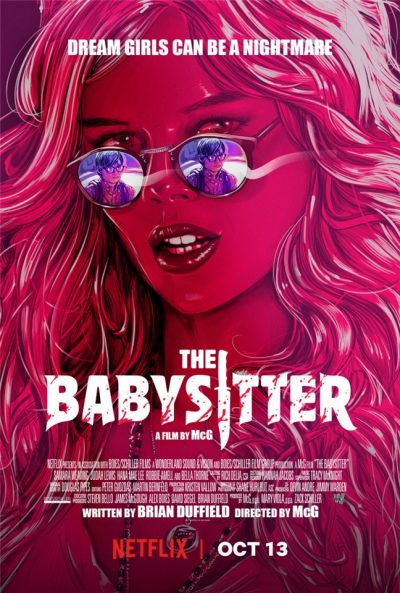 Which brings us to this. I’m still not certain if “straight to Netflix” will become this generation’s “straight to video.” The ones I’ve seen have been a bit hit or miss, shall we say. This one is, sadly, more miss than hit: it has a lovely premise, yet likely makes for a better trailer than an actual film. 12-year-old Cole (Lewis) has the perfect babysitter in Bee (Weaving): funny, attractive and unlike everyone his own age, totally into Cole, despite his nerdish tendencies. When his parents head off for the weekend, Cole is delighted. Not so much, after he sneaks downstairs after bedtime, to see Bee has invited over a few friends to help her carry out a human sacrifice as part of a satanic ritual – a process which will also require the “blood of the innocent.” Guess who that is?

It’s fun enough when playing with the concept, and contrasting Bee’s carefully constructed image with the reality of her evil scheme. It’s a good deal less successful when it abandons that, and goes into more or less straight slasher mode. The plot holes abound: despite explosion, gun-fire and all kinds of other carnage, no-one on this suburban street even opens the curtains, and nor does Cole seize any of the copious opportunities to do the sensible thing and leg it. Bee completely vanishes, for no apparent reason, in the middle, leaving much of the chasing of Cole to her cult pals and genre stereotypes, jock boyfriend, Max (Amell) and dumb cheerleader Allison (Thorne). It’s all very lazy writing (seriously, is any 12-year-old with Internet access really so ignorant of what an “orgy” is?), and tends to come across as less loving homage to 80’s slasher flicks, than a lame copy of them.

There are some positives, beyond Weaving’s perkily psychotic performance. The splatter is quite generously arterial, and as mentioned, it’s a nice idea. Over the history of horror, the babysitter has been the one in peril, so being the peril herself is indeed a reversal. That isn’t enough in itself to justify a feature-length exploration, and once the director gets past the switch-up, he doesn’t seem to know where the movie should go. In the right hands, it could have worked better; it needs to go full throttle, but under McG, it ends up being more Full Throttle than full throttle…