Aspiring actress Serena (Socha) accepts a part in a horror movie, at the urging of her agent, and much against her better judgment – she doesn’t even like horror movies. Which probably explains why she doesn’t run screaming in the opposite direction, when transportation to the remote shooting location (strike one) is a converted school-bus (strike two), driven by the local village’s idiot (strike three, you’re outta here!). No cell reception either? And look: if you don’t high-tail it out of there when you are serenaded, literally on your arrival, by banjo music… Well, everything else that happens thereafter to you, largely counts as a self-inflicted wound, I’d say. 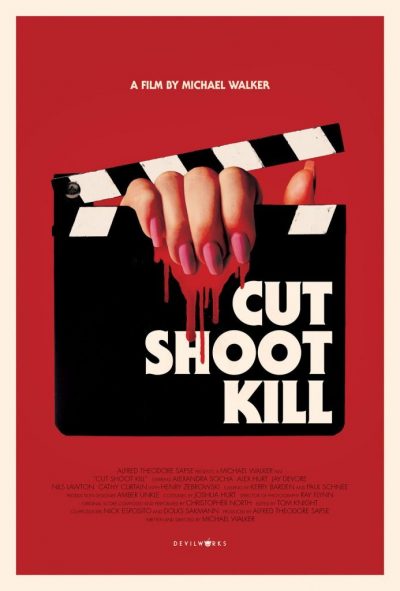 There’s no denying that director Alabama Chapman (Hurt) is committed. Oh, my mistake: I meant, “should be”. Right from the get-go, and his first meeting with his potential lead actress, he seems a little off. Other red flags to the more savvy than Serena, might include his previous lead actress having been murdered (bonus flag for being a topic everyone is reluctant to talk about), his passionate speech on the need for truth in cinema, and the other performers evaporating, without saying goodbye, as soon as they’ve finished shooting their scenes. No prizes for guessing they’re victims of Chapman and the rest of his psychotic crew, as he seeks to stretch the movie’s special effects budget, just a little further.

Yet despite the film being obviously built on the blind stupidity of its lead, this isn’t without its merits. The lines between the scenes being staged for the film, and the real murders, are blurred to the point you’re often not sure whether you are watching the actors interacting, or their characters. It’s not easy to pull off a “film within a film” level of meta-horror, and Walker nails this aspect. There is also a good sense of escalation, so that a laudably dark and twisted ending makes more sense than you would have expected at the two-thirds point. In hindsight, the turning point was likely Serena’s panic attack when she’s having a full latex mask of her head cast: it’s up to Chapman to talk her down. His chosen topic being the violent end of her predecessor, tells you all you need to know.

The film does likely topple over into self-indulgence more often than it should, and there are simply too many characters, many of whom are apparently present for no purpose than to provide nods to low-budget cinema production. It’s quite difficult to give credence to such a large group of people being able to keep such a high volume of slaughter and mayhem – which includes even the local police as victims – entirely below the radar. These issues didn’t impact my overall enjoyment too much though. For a low-budget effort, especially one in a sub-genre where the path is well-worn, to put it mildly, there were enough inventive elements to leave me feeling the time hadn’t been wasted.