I may have lost the will to live. For this is the kind of film which doesn’t just fail, it fails in such a disastrous manner that you wonder how those involved ever decided this was, in any way, of releasable quality. The film actually came out on MTI, probably the company whose films I’ve reviewed most over the years: they were the first I ever contacted about getting review copies. Eventually, they stopped sending them out in general, and I stopped reviewing them. On the evidence of this, I’d like to thank them for saving me from punishment which is probably illegal by international convention. 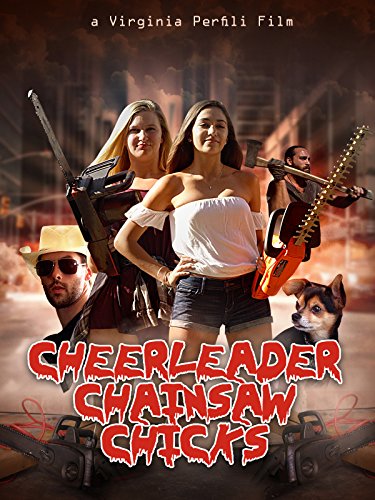 It’s apparent what we’re in for, from opening scenes which feature several minutes of utterly generic footage of Los Angeles landmarks, behind vapid dialogue such as “I love driving down Sunset Boulevard. This is where all the L.A. bands got famous.” This chatter is between three cheerleaders, Michelle (Giller), Pamela (Hynes) and Andrea (White), who are on their way to a cheer camp. Not that the makers could be bothered to scout an appropriate location. The cheer camp takes place at a film studio, because we’re told, “They used to make horror films here”. Which has to be the laziest explanation ever, for failing to putting in any effort.

The place is still apparently under construction, which explains the copious shots of power tools being wielded, carried about, or just sitting ominously around, as expressed in the amazingly clunky dialogue above. Seriously, there is so much random footage of them, the whole things feels like an infomercial for Home Depot. On registration, the girls meet facility manager Axel Johnson (Sharrow), who invites them to his “80’s Flashback Video Party”, taking place in the theatre. Because, of course, this kind of event is what cheerleaders live for. I clearly should be hanging outside high-schools and blasting my cassette of Duran Duran’s greatest hits.

Yes, let’s talk about kumquats. For some reason, the flora in question plays a supporting role in this feature, perhaps also being sponsored by the Kumquat Growers’ Association of California. But the bizarre thing is, the tree in question appears to contain some kind of inter-dimensional portal: check out this GIF and you can clearly see the swirly portion in question. I was expecting some kind of subplot about space aliens. No such luck. In fact, nobody mentions it, even though two people are looking right at it. However, I did learn, with regard to the fruit, you “eat ’em skin and all.” So, if nothing else, the film did increase my kumquat IQ.

It’s probably relevant that the film spends more time on members of the flowering plant family Rutaceae and power tools, than on… oh, actual cheerleading. There’s a not-very funny joke about Goth cheerleaders, a scene where our three heroines ruthlessly critique another squad, who are entirely out of shot, a few lackadaisical cartwheels and that’s about it. At one point, they do drive off to meet another cheer squad, except this sequence seems to exist purely for footage of LA traffic, as the people they are supposed to meet never show up. We get more footage of LA traffic, as they drive back, detouring via a lake for no reason. Anyone watching will be in agreement with the un-named cheerleader (they all sound the same, and it’s done in voice-over), who says:

“That was a total waste of time.”

There are many elements here which make no sense. Is the character Lana supposed to be a Yugoslavian cheerleader? If so, for what reason is she pushing a trolley of power tools past the kumquat tree? Why do we rarely see her lips move, most of her dialogue occurring with her hand conveniently in front of her face? Between that, the hat and sunglasses, I’m wondering if the role was originally to be played by Bela Lugosi, until the producers discovered he had inconveniently died in 1956. It’s also frequently repeated that there’s no cell-phone service here [yeah… in LA County? Suuuuure…]. This never comes into play, because there is no point at which anyone needs or attempts to make a phone-call.

But the film reaches its absolute pits at the 80’s Flashback Video Party, which consists in its entirety of Axel watching and providing commentary on selected clips from the filmography of… yes, you guessed it, Virginia Perfili. According to the IMDb, she hasn’t directed a feature for twenty-three years before CCC, having felt that her career had peaked in 1995, after the twin masterpieces of Mirror, Mirror III: The Voyeur and Bikini Witness. [Hey, don’t knock the Mirror, Mirror franchise: part two was the first leading role for some guy called Mark Ruffalo. As Axel proudly points out.] There is almost fifteen minutes – and it feels much longer – of this annotated footage recycling from Bikini Witness, movies Perfili produced, and pop videos which presumably have some tangential connection to her.

Finally, after almost forty minutes, something approaching a plot slinks in, hoping no-one will notice its late arrival. There’s been a break-in at a nearby government facility “that does defense satellites,” and our trio spot the perps stashing the stolen schematics. Unfortunately, the perps spot the trio spotting them, but head off anyway [For no apparent reason, there’s a scene at this point where Lana gets covered in red gunk] Axel and the girls pick up the stash, and when the thieves return to find it gone, a carelessly-discarded pom-pom clues them in to the culprits. They plan to kidnap Michelle’s chihuahua, Theo, for ransom – though this appears mostly so that a bad guy can yell, “I’ll get you, and your little dog too.” That’s as close as the film comes to delivering the ‘dark comedy’ promised on its website.

We pause, for a sequence of a handyman pouring water over himself while chopping wood, as two of the cheerleaders salaciously eat ice-cream. Then the bad guys attack, during another one of Axel’s unique, Tribute to Virginia Perfili-themed parties, and snatch the pooch. At the negotiated exchange, Axel organizes a double-cross… and, hallelujah we finally get something approaching the title. Though technically, there’s only one chainsaw chick: as shown below, the other one is clearly wielding a hedge-trimmer, while the third has a weed-whacker. I guess Horrible Hedge-Trimmer Harlots or Woeful Weed-whacker Women probably wouldn’t have sold well. Though, I dunno… 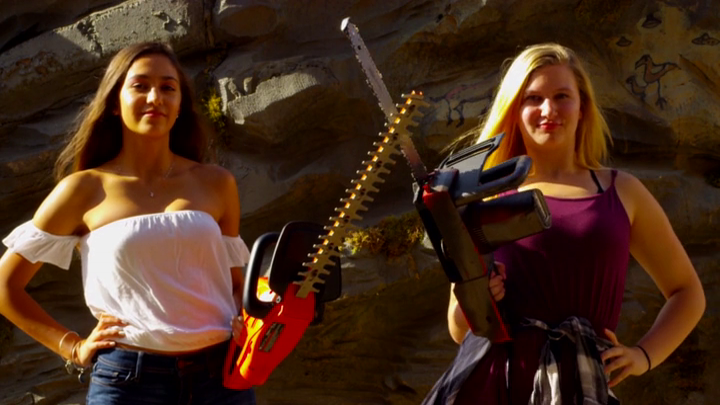 “I think, I think she’s eating a cucumber.”

There’s no actual chainsawing, trimming or whacking either. It’s hard to say what is done, but it seems to involve the heroines running around in a tight circle, while the bad guys look extremely confused. They’re arrested, the cheerleaders end up getting scholarships, with two of them being recruited by Homeland Security, and Axel starts a business telling people how to flip real-estate. The infomercial for this occupies the last five minutes of the film, rolling on through the end credits. The footage of Axel pretending to ride a horse in front of a green-screen showing scenes from earlier in the movie, must have seemed like a good idea at the time to someone. I have no idea who, or why.

This is bad on a whole, epic level. If it had been made by amateurs, operating out of their parents’ basement, it would have been understandable. But it appears Perfili has been in the movie business for more than two decades, so she should seriously know better. She knows people. And she knows people, who know people. Didn’t any of them have the courage to take her aside and point out what a stinking turd she had created? I do not hand out F grades lightly. It has been over four years since the last. However, there’s no doubt: this one entirely deserves it, for it’s impeccable ability to combine wretched performances, incompetent direction and a script with no redeeming features.