Chris showed this movie to her teenage daughters, in order to scare them off hitch-hiking. While, technically, more a warning about the dangers of picking up hitch-hikers, it seemed to have worked, and it’s easy to understand why. Jim Halsey (Howell) has a job driving a car from Chicago to San Diego. In danger of falling asleep late one night, on a lonely highway in Tezas, he picks up John Ryder (Hauer), in an effort to stay asleep, even though he knows it’s a bad idea. “My mother told me never to do this,” is his first line. Cut to Chris nodding, emphatically.

For Mrs. Halsey was absolutely correct. It’s not long before we sense the true nature of Ryder, who makes no attempt to hide it. There’s a quiet, understated certainty about the way he delivers his lines. In less subtle hands, lines like, “Because I cut off his legs… and his arms… and his head. And I’m gonna do the same to you,” could have become the stuff of camp. Here, they’re stated as a laconic matter-of-fact by Hauer, and are all the more impactful as a result. But it’s not long before John starts delivering the terror; even being booted out of the moving car by Jim proves to be only a temporary setback. 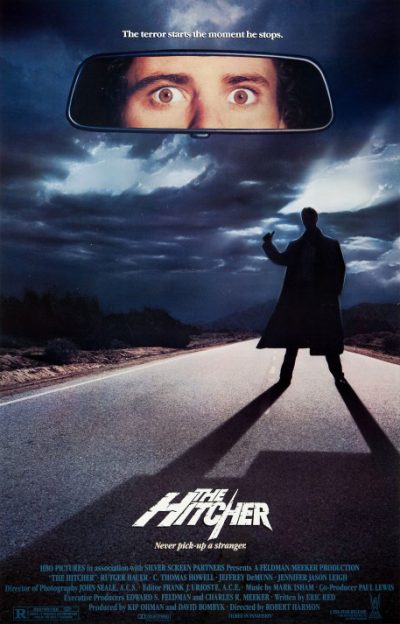 It’s very much a product of its time in many ways: the existence of cellphones these days would require significant rewriting. I was also struck by how the three lead characters all smoke, to such a degree I was surprised the hero wasn’t named Philip Morris. There’s also the question of what he’s doing in Texas to begin with. Because, according to Google Maps, the route from Chicago to San Diego goes nowhere near that state. However, explanations are largely deemed irrelevant by the film. For example, none is provided for the supernatural way in which Ryder is perpetually able to remain one step ahead of his victim, e.g. dropping a severed digit into his burger and fries, purely for the LOLs.

Watching it this time, I was surprised to realize how little Hauer’s character is actually on-screen. He’ll dip in, terrorize his victim, then vanish. Yet his presence looms over almost every scene, and drives Jim’s character arc. He gradually turns from a meek kid into someone who, towards the end, bears more than a passing resemblance to a young Mad Max, hunched over the wheel of his deathmobile. He has become a vicious killer, which was John’s intention all along. I tend to view Ryder as Satan, perhaps literally, whose mission is to corrupt his victim. It’s hard to argue with what Hauer said of this character: “To me, the devil can be a piece of foam inside your brain. To me, he was a ghost of sand or something. An unreal character. My job for that film was to make you feel that this man can do really weird shit and even if you don’t see it, you’ll believe he did.”

Finally, spare a thought for the poor owner of the car Jim was driving to San Diego. It was side-swiped by a bus, then set on fire at a gas station, and eventually abandoned at the diner. I’d love to have seen that insurance report. 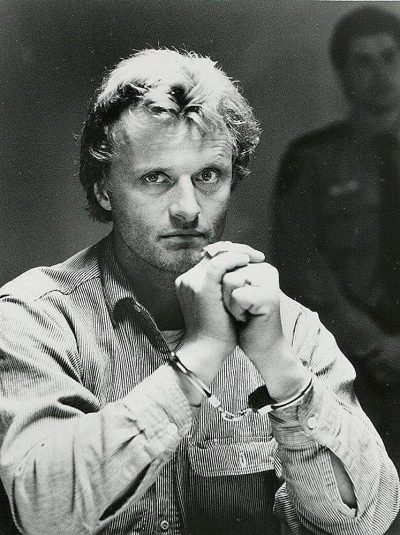 Original review [March 2009]. I’m still amused by Roger Ebert’s review of this where he wrote, “This movie is diseased and corrupt…it is reprehensible.” He seems obsessed by the homoerotic subtext he sees in the relationship between psychotic John Ryder (Hauer) and Jim Halsey (Howell), as the former stalks, torments and confronts his prey, for no real purpose at all. Occasionally, this seems possible, but it feels more like a father-son relationship [it reminds me of the one in Dexter] and that reading is countered by sequences like the one where Ryder snuggles up to Nash (Leigh), gently stroking her arm. Here’s an interesting thought: Ryder doesn’t actually exist, except as a deranged figment of Halsey’s imagination, a persona separated off to blame for the killings Halsey is actually committing. For we never actually see Ryder kill anyone. Certainly, there are some issues with this reading; though not really any more than, say, Fight Club.

This is probably Hauer’s best performance ever, totally dominating the screen, in a way rarely seen, to the point that the rest of the cast struggles to keep up, even Leigh, who has done some fine work since. Here, she ends up on the receiving end of some Rutger-abuse, not for the first time in her career (see also Flesh and Blood), taking part in what we like to call the Jennifer Jason Leigh Taffy Pull. Eric Red’s script does an excellent job of creating a mythical monster, a modern-day boogeyman more threatening than Jason, Freddy or Michael, simply because he possesses no motive. “Why are you doing this?” begs Jim, and gets the impenetrable response, “Because I want you to stop me.” Jim’s question actually applies just as much to the ground up and spat out remake twenty years later, which possessed not one ounce of the danger or suspense shown here. If only someone had stopped that… A-