A rare appearance by Hauer in a documentary, this depicts everyday life in London, circa 2008. Oh, wait: my mistake. Apparently, by that date, global warming will turn – or had turned, from a current perspective – London into a slightly-flooded den of iniquity. Though if you can’t spot the difference, it’s understandable. Slightly less knife crime in this version, probably.

Hauer plays Harley Stone, a Loose Cannon Cop (TM), haunted by the death of his partner at the hands of a mysterious creature, ten years previously. Though not, apparently, so haunted as to stop him from banging his partner’s wife, Michelle (Cattrall). Harley now survives on a diet of coffee, processed sugar and adrenaline, and matters are not helped by the apparent return of the killer, which resumes its murderous acts. It appears to have some kind of psychic link to Stone, and sends him little presents, such as an ice-chest containing a slightly-chewed heart. Totes adorbs. 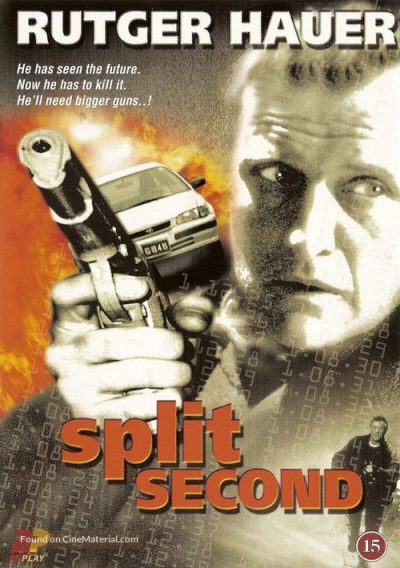 In a desperate attempt to rein Harley in, his boss assigns him a new partner, rookie Dick Durkin (Duncan), who is the complete opposite of Stone, naturally: Oxbridge-educated, clean living and intellectual, rather than going by his gut. However, instead of having the intended effect, Durkin is the one changed, particularly after he encounters the monster. All of a sudden, and much to his partner’s joy, he comes over all, “We need bigger guns, big fucking guns! We’re getting big guns, right? That’s where we’re going, to get big guns…”

This story is, obviously, nonsense, as much as its gratuitous use of Nights in White Satin implies. When we finally see the creature, it’s an Alien-knockoff – so, how the hell was it capable of buying and sending a goddamn ice-chest to Harley? It doesn’t even seem to have opposable thumbs. You can certainly tell the original director bailed, with someone else (Ian Sharp) directing the finale, which supposedly takes place on the platform at Cannon Street tube station, and is largely at odds with what has gone before. The method of demise for the creature is particularly questionable, suggesting this monstrous beast has a rib-cage constructed of balsa.

And, yet…  In my mental library, this gets filed alongside another example of funky, cheap SF from the early nineties, Hardware. I’m not sure why that seems to have a higher cult status. There’s a similarly grungy aesthetic, and both films provide a guest spot for a British musical icon – here, the late Ian Dury as a club-owner. You also have the similarly late Pete Postlethwaite in support, playing a cop a year before his Oscar nomination for In the Name of the Father [Pauses to check if Kim Cattrall is still alive… Yep, we’re good.]

This is one of the cases where Hauer proved capable of lifting questionable material up, through sheer force of will. And credit due to Duncan, for withstanding all of Rutger’s scene-stealing, even if he comes over as a budget version of John Hannah. Their slowly-developing relationship is a joy to watch; Duncan had a long stint as a side-banana on Taggart, and slots into a similar role here very nicely. Meanwhile, despite sounding like a retired WWF wrestler, Harley Stone is one of Hauer’s best characters, and deserves to take his place in the Loose Cannon Cop (TM) Hall of Fame, along John McClane, Martin Riggs and John Spartan.

Original review: This thoroughly enjoyable B-movie stars Hauer as screwed-up cop Harley Stone, who lives on sugar, coffee, adrenalin and irritating his co-workers, particularly his new partner (played by Taggart veteran Duncan). Still, it’s a screwed-up world too, with London knee-deep in water, and an insane serial-killer slaughtering people in ominous fashion. The plot is, by and large, ludicrous: it’s the interplay between Hauer and Duncan that make this work, as the latter’s character slowly warps towards that of his colleague, culminating in the renowned “bigger guns” speech which nods to Jaws while simultaneously eclipsing it. The supporting cast includes Pete Postlethwaite, Ian Dury, Cattrall and Michael J. Pollard – one of them spends a lot of time in the shower, luckily, it’s the one you’d expect. The film also delivers a fair bit of gore, and London is used to good effect. But this is Hauer and Duncan’s movie, without a doubt, and it’s one of the former’s finest outings since The Hitcher.  B+