I was drawn in by the following synopsis: “The 1970’s Hungarian Secret Police take on countless hungry vampires using their fighting skills and bloodsucker-adapted spy gadgets.” I’d still like to see that movie, because this one isn’t it. Firstly, they aren’t “countless”. There is, in fact… One. I don’t know about you, but that’s pretty easy to count. Even the Sesame Street example should be able to reach it. Next, there’s hardly any fighting until the final face-off at a railway depot. And I have no clue where the last three words came from: the writer’s fevered imagination, I suspect, because it clearly was not the film. 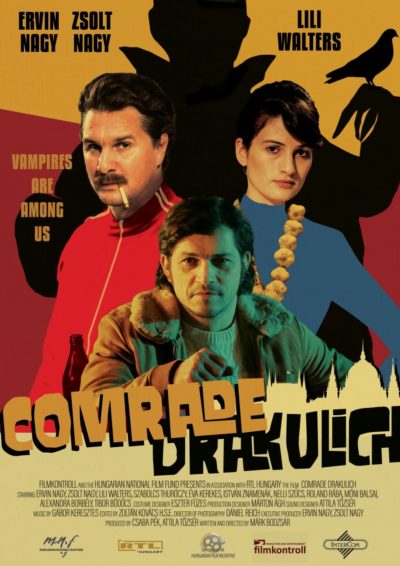 It does take place in seventies Hungary, where global revolutionary Béla Fábián (Z. Nagy) is returning to his native country after decades fighting imperialism abroad, to promote a blood drive for the Viet Cong. The local intelligence group are suspicious of his motives, so insert operative Mária Magyar (Walters) as his personal assistant for the tour. As soon as Béla shows up, there’s something odd about him: he looks much younger than his colleagues in the war. The more time Mária spends with him, the more she’s convinced he’s a vampire. Her other half, fellow agent László Kun (E. Nagy), was not happy about her mission to begin with, and decides Béla must be disposed of. The powers that be, however, turn out to have other plans: it’s not as if the leaders back in Moscow are getting any younger.

Even this, considerably more restrained story-line still has some potential, especially considering the rich middle-European tradition of vampires, through that other Bela, Mr Lugosi, all the way back to Vlad the Impaler from Transylvania, located not too far away. The movie doesn’t do much to mine any of it, though in its defense, I suspect there may be a lot of inside jokes, such as references to the politics of the time, that only Hungarians might appreciate. As a supposed horror-comedy, it has literally no laughs, reaching about the level of a wry smile only once, when the authorities are reduced to mining pulp literature as a source of intelligence on their foe.

About the only thing which stops this from collapsing entirely under the weight of its own pre-glasnost weight, is the decent chemistry between the two leads. It’s easy to feel sympathy for Mária, who is trapped in an unfulfilling relationship and with a job – pun not intended – that sucks. As a vampire, Béla is an affable sort, who doesn’t want to hurt anyone. This is why he’s living off donated blood, drunk through a straw from a local, raspberry-flavoured soda bottle to avoid suspicion. You want them to prevail over those who are trying to use the pair for personal or national gain, and it’s just about enough reason to keep watching, through a parade of visits to garment factories, etc. However, it’s an entity feeling in significant need of a transfusion.