I’m very, very sorry. We’ve been on a bit of a shark movie kick around these parts of late. The fruits of these labours (and in some cases, labour is certainly the word) will be released here in a bit, as we give you Shark Week 2022: Chum Assembly Required. We had finalized the schedule when we heard about this one, released on Tubi, Friday night. Naturally, we pounced, as soon as we saw the title and synopsis: “Decades ago, the USSR developed unkillable sharks and launched them to the moon. Today, a team of American astronauts will endure the fight of their lives.” How could this possibly go wrong? Well… The fact it didn’t reach the low bar for inclusion in Chum Assembly Required should tell you something. 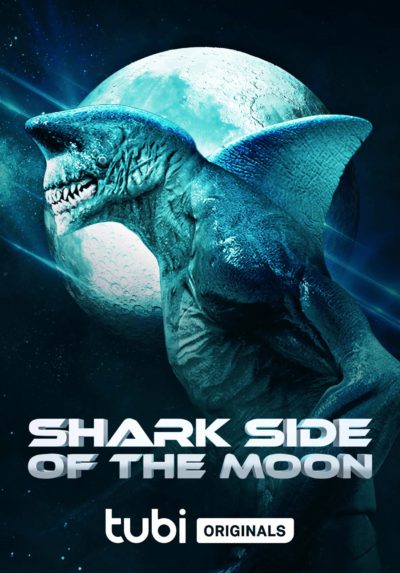 It’s only a loosely accurate synopsis anyway. It makes it sound like sharks on the moon was a deliberate Soviet plot, for a start. In reality (I’m seriously questioning my use of that word), these hybrid shark supersoldier types escape in the eighties from the facility that created them, end up crammed on a Russian spacecraft and are fired to the moon to stop them from taking over the world. This makes about as much sense as anything else here. Jump to the present day, when an American mission to return to the moon, led by Commander Nicole Tress (Witrak), goes off course, crash landing on the dark side, near the shark’s base.

The Russian scientist who accompanied the sharks, Sergey (Mikitas), is still there, along with his adopted mostly-human daughter, Akula (Fox). They want to help the Americans repair their ship, so they can all return to Earth. However, the sharks – who certainly are far from the “unkillable” promised – under their bizarre-looking Tzarina (a shark with breasts: this movie clearly went full Rule 34), want to hijack the ship, use it to take eggs back to Earth, and thus take over the planet. Again: how can you screw up such a bonkers scenario, especially when you ask your actors to simulate walking on the moon by bouncing a bit?

The main problem is the sharks, which are flat-out terrible in execution. Seriously, Post Apocalyptic Commando Shark did more with considerably less. I wasn’t expecting quality, and was still severely underwhelmed, in particular whenever there was any supposed interaction between humans and sharks. Mind you, the human characters are hardly any less plastic and unconvincing than the CGI, and the details of the plot make not the slightest sense. There is some camp value in the complete disregard for anything approaching science. I did complain about people having conversations in a vacuum. But, as Chris quickly pointed out, “Sharks. On the moon.” Fair comment.

Every other aspect though, is poorly constructed and, worst of all, just not much fun to watch. I wanted something like Iron Sky, or even the same duo’s Planet Dune, which was at least entertaining. I got something worse than any Sharknado, a genuine chore to endure, and I don’t know why two directors were deemed necessary. It seems either too many or not enough, I’m unsure which. File in the folder of movies whose appeal begins and ends with the title.