Well, look at Mr. Fancy Pants here, watching a Chinese movie without a giant shark or nine-headed snake in it. Admittedly, a Jackie Chan flick hardly counts as arthouse fodder, though it’s all relative. Sad to say though, I think I preferred the average Chinese Animals Attack film to this. All I could keep thinking was things like, “Y’know, there was a time when Jackie would have sent a vehicle plunging down a steep slope and through buildings, without needing crappy CGI…” But what really hurt were the characters. While Chan has never been a great actor, he has charisma and personality. Here, he’s about the only one. 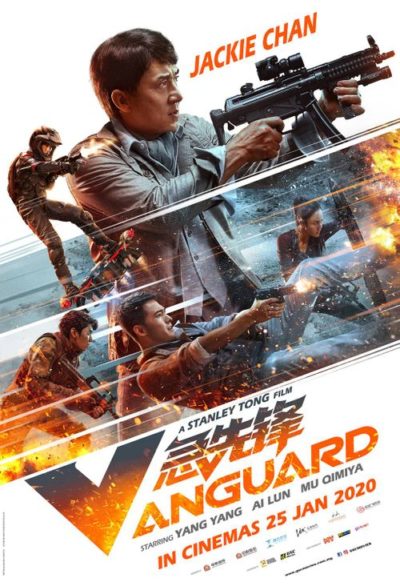 Probably the first misstep is making your central character an accountant. Were no chartered surveyors or actuaries available? Qin Guoli (Lou) worked on the books for a terrorist group, but when their leader is killed, his son, Omar (Hourani) takes over. He tries to kidnap Qin, intending to force him to give up the group’s finances, so they can be used to buy a devastating new weapon. Fortunately, Qin had contracted with the Vanguard security group, run by Tang Huanting (Chan), to protect him and his family. So begins a jet-setting adventure that bounces from London to Africa to Dubai. Though since Jackie is getting on a bit now, being in his late sixties, it’s top agent Lei Zhenyu (Yang) who does most of the heavy lifting, in terms of physical action scenes.

I also remember when Chan movies ended in a slew of punishing out‐takes, typically involving ambulances. Well, the out-takes are still here. Only, they peak with someone being slightly pinned by a capsized boat. Otherwise, it’s antiseptic being applied to skinned knuckles, which drives home the lack of genuine danger to be found. Maybe some pixels were harmed in the making of this, but that’s about all. It’s not entirely without merit in terms of action. Tong has been working with Chan for approaching thirty years, and knows how to shoot mayhem. This is most apparent in a fiery gun-battle through an African terrorist stronghold, which is exciting and impressive. But classic Chan films typically gave us something we wouldn’t see elsewhere, rather than competence inspired more by things like Wolf Warrior 2.

You also cared what happened to Jackie. Here, not so much.  Yang is utterly forgettable, having him bond with his godson being about as far as the film bothers in terms of building a character or making the audience empathize with him. Other gaffes hamper proceedings e.g. when we finally see the terrorist weapon in use… it’s a bit crap. Certainly, I’d be filing a PayPal dispute with the seller, given the $200 million price tag. Or CGI hyenas that do pratfalls like running into car doors. I’m pleased to report, even the local Chinese audience were unimpressed, this being close to Chan’s lowest performing movie at the box-office there of the last decade, and worldwide, failed to cover even its production cost. I trust valuable lessons have been learned by all involved.