To be honest, there were significant chunks of this where we had no idea quite what was going on. Part of the issue was audio that was all over the place, a situation not helped by some heavy local accents. The performances were similarly variable, from the perfectly serviceable to the “random bystander roped into service” level. And yet, despite these and other flaws, we kept watching. For there’s a constant stream of… stuff going on. It may not all work, or even approximate coherent sense. However, it’s never boring, and the ambition on view is endearing. 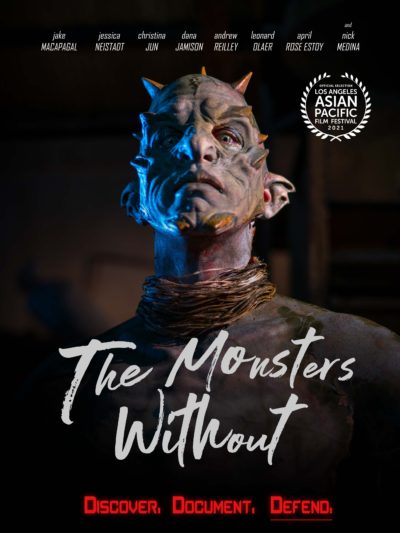 In this universe, a long time ago Earth was visited by a variety of creatures called Yablo. After a war with humanity, they withdrew from society, but are still around, on the fringes. It’s the job of a multinational task force called PHASE to research the Yablo, and protect humanity from them. The Philippines branch of PHASE is led by Setsuko (Lim) and her husband Rommel (Macapagal), who have to wrangle a young and inexperienced roster, including rookie Miranda (MacCleary), who may not be all she appears. But the biggest problem is a Yablo called Nameless (Medina), who has a plan which, if implemented, could seriously damage Earth’s ecosystem. With Rommel out of the picture, and PHASE’s true agenda revealed, it’s up to Setsuko and her squad to stop Nameless.

What you get here seems to be a mix of Phillipino folklore, stuff from other sources and entirely new fabrication. In the first category, for example, would be a woman which can separate herself at the waist, the top half flying away. Don’t see that every day. Then, there’s the sequence where the PHASE team visit a Yablo village, and end up doing karaoke with them. As you do. At times, this feels like an episode of Mighty Morphing Power Rangers – you may view that as a good or bad thing – though at others, it’s surprisingly mature. Deadpan humour? Sure. Earnest messages about tolerance? Why not. It doesn’t all work, to be clear. Yet it’s the kind of film where too much is better than not enough, and this definitely skews in the right direction.

There’s a lot of scope in this universe for exploration, with PHASE acting like MONARCH from the Godzilla movies. Every country has its own mythology which could be mined for future entries: conceivably everything from banshees to werewolves and centaurs could be fair game. To be honest, a larger budget to flatten out the rough edges would be welcome, and perhaps bolster the CGI. While many of the monsters are executed practically, some of the digital work isn’t up to standard, and a movie tends only to be as good as its weakest link. But perhaps what I’ll remember most is the end credits, where we learn one of the minor characters was played by Phoebecates C. Bastida. Somebody in the Philippines really liked Fast Times at Ridgemont High…