One of the frequently expressed anti-censorship arguments is, if films are “bad” for those who view them, why are those who censor them not affected by the same material? I guess this film is about a case where that isn’t so. But I have to say “I guess”, because this ends up being so obtuse and unclear about what the fuck is eventually going on, it’s borderline painful. Full disclosure: I watched this at the end of a long day – specifically the day before burying my mother. On the one hand, a tough situation for any film to enter. On the other, it’s almost impossible for any film not to improve my mood in such a circumstance, simply by providing a distraction. That Censor undeniably failed to do so, tells you a great deal. 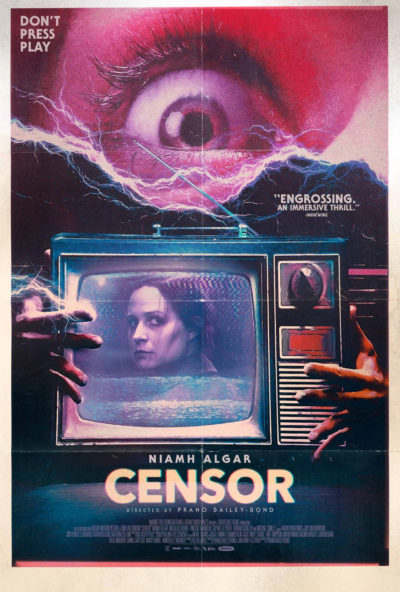 It takes place during the British “video nasty” panic of the eighties, when Enid Haines (Algar) is working as an examiner at an unnamed organization, clearly based on the BBFC. Though tough, she’s diligent about her work, unlike some of her colleagues, who skew heavily towards “ban” or “release uncut” the material they view. But Enid finds herself increasingly troubled by what she’s viewing. There are issues lurking in the past, related to the unsolved disappearance of her sister. It’s something from which her parents are ready to move on, but Enid is not yet prepared to let go. Matters come to a head after a brutal killing appears to mimic a film which she had passed, bringing scrutiny down on both the board and Enid in particular. She begins to hunt a notorious but reclusive film director, Frederick North (Schiller), whose previous movie bears a resemblance to her sister’s abduction, and is now filming a sequel.

Which is where things go a bit weird. To put it mildly. In fact, “spectacularly off the rails” might be closer to the truth, with the film vanishing up its own arse in a welter of ill-conceived giallo-like nonsense. This is a meta “horror movie” (quotes used advisedly, but the decapitation count here is non-zero), for people who don’t like, appreciate or even understand horror movies. Witness the final shot where it’s revealed (spoiler, duh) that you have actually been watching a videotape of a film called ‘Censor’ all along! If you think that makes this the peak of modern horror cinema, you’re an insufferable hipster. Or possibly Mark Kermode. More normal people will likely go, “Really? REALLY?” under their breath.

What’s aggravating is the early going had promise, with a Videodrome like dive into the heart of cultural darkness in pursuit of a mystery. Setting this against the backdrop of an eighties moral panic, seems like a critique of the contemporary equivalent, attempting to cancel those who, for example, dare point out that, no, the science is far from settled. Though that’s a parallel few Kermodes will acknowledge. But the movie instead melts down with the speed of a stuck projector reel, Bailey-Bond choosing in the last act to ape most of the video nasties by being complete shit. If this is “new horror” or whatever the preferred pretentious term is, it can continue to fuck right off.