This initially felt like one of those Hammer thrillers Jimmy Sangster churned out in the sixties, in which a mentally unstable woman (it was always one of the “weaker sex”) was driven to insanity by a conniving relative. In this case, the victim is Dominique Ballard (Simmons), whose husband David (Robertson) needs her money, stat, to prop up his business. I was, however, slightly surprised when Dominique hangs herself at the 25-minute mark. Not many films in which the title character collects their cheque so early. 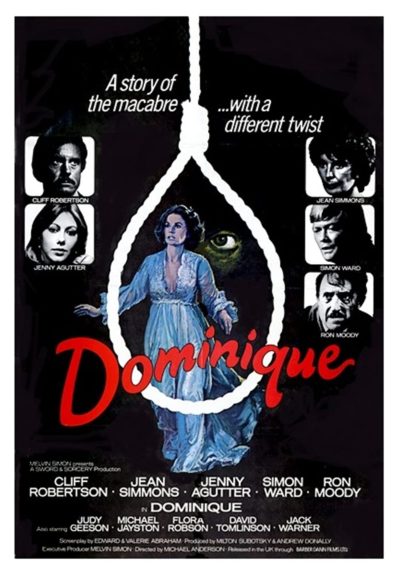 Ah, but wait. Turns out, the model here is closer to Nightmare Castle, or in particular, Les Diaboliques – that title character’s name seems an obvious nod. For it’s not long before it is David’s turn to see things which make him question his sanity. First up is the delivery of a headstone beside his wife’s grave, with his name on it, and ‘Died: Soon’. It’s just him and new chauffeur Tony Calvert (Ward, sounding like a young Michael Caine) in the house, David’s half-sister Ann (Agutter) having left after the funeral. So why is David hearing his wife’s ghostly piano-playing echoing through the house? Worse, why is he seeing Dominique? Then there’s the note, apparently from her, saying she’s looking forward to him joining her on October 25th, just a few days away.

Director Anderson had a career to this point best described as variable. While Logan’s Run (also starring Agutter) was a critical and commercial success, he had followed it up with one of the most glorious turkeys of all time, in Orca: Killer Whale. This is… Not that, and perhaps more’s the pity. Orca did, at least, go places no previous movie had gone (albeit, mostly for good reason). This feels emphatically intent on playing it safe in every aspect. While the cast are generally solid (as well as Oscar winner Robertson, we also get another nominee in Ron Moody as the local doctor), they all feel underused, likely none more so than Agutter. Her character virtually vanishes in the second half, a fact which may or may not be important.

Given the limited number of candidates present here, it’s not very hard to figure out who is responsible, especially if you have seen any of the movies referenced above (well, except Orca – sadly, no psycho cetaceans are present here). However, I must say proceedings are quite nicely filmed. The movie has a colour palette that borders on the Argento-esque, which feels quite unusual for a Hollywood film of its time. You’ll certainly have plenty of time to admire the staging, with all the sequences of David creeping, very slowly, around the corridors of the house.

With a very restrained approach to sex ‘n’ violence (none and PG-rated at worst respectively), this feels like it could easily be a TV movie. That it fell through the cracks, and dropped into the public domain, is not a huge surprise. It hardly feels worth the trouble to copyright.