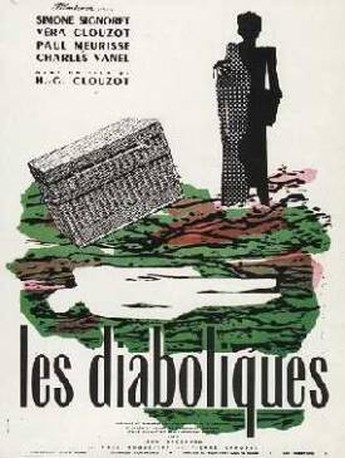 Despite being largely underwhelmed by the US remake, got the chance to see the original, and…well, it’s better in most ways, even if this must be weighed against the loss of the surprise element the second time round. For the plot is almost the same (two women team up to kill one’s husband – but the corpse then vanishes), although the ludicrous, horror-movie cliche ending in the Stone/Adjani version is mercifully absent. The husband also comes across more solidly, as someone deserving of his fate. However, knowing the twist does work against the film, since your sympathies will be skewed wrong.

Signoret is blondely callous, and casting Sharon Stone in the remake is not exactly a stretch [Even her initials match!]. The director’s wife, Véra Clouzot, is the darkly frail other woman, and her significant-to-the-plot heart-complaint is very much more underplayed. On the other hand, the elements of black comedy seem pushed further to the fore, which is no bad thing, given that the central concept is pretty ludicrous. After seeing this, a remake which fails to add anything significant beyond the English language, looks more pointless than ever.