[1] Gwendoline (Tawny Kitaen) is a luscious, pouting virgin (!), the heroine in a French comic strip with the imaginative title of “The Adventures of Gwendoline”. She inhabits a world where heroes parry bad guys with witty one-liners, heroines have extreme difficulty keeping their clothing for more than a few rapid scene changes, and where anything can (and if it’s silly enough, probably will) happen.

We first meet her stowed away in a crate full of straw on the docks of Shanghai or some similar exotic set, er, location. Inside two minutes, she has been accosted by oriental villains (with dodgy sneers and even dodgier accents), sold for 300 of whatever-the-local-currency-is (plus 50 for the shoe) and rescued by the designer-stubble clad hero who manages to dispatch everyone present in true comic-book style. Pausing only to adjust his cool (this guy shits ice-cubes), he departs, leaving Gwendoline soggier than the Weetabix you didn’t finish yesterday. 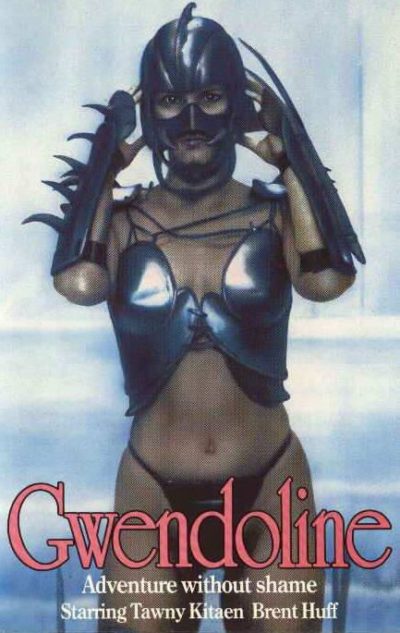 What really makes this film ‘work’ is the style and pace of the direction. One of those rare films where a largish budget was probably involved, yet without obvious result, the action hardly lets up. Any attempt at character development, acting or the building of tension would have slowed things down, and are thankfully avoided. Our hero, Willard (Brent Huff), Gwendoline and her friend/chaperone are put in jail. Why? So Willard can pull the guard’s head through the bars leaving his ears behind…

Gwendoline is trying to find her father, a butterfly collector, who has strayed into the depths of the country’s interior, where tropical rain forests, deserts, volcanoes and swamps co-exist, blithely oblivious to the laws of nature, and within handy walking distance of Shanghai. Pretty obviously, Willard has no choice but to guide the girls past oriental pirates and rubber crocodiles & boa constrictors, pausing only to deliver one-liners like “Quick, get your clothes off!”.

Captured by a tribe called the Cheops(!!) before Willard can come up with a smart remark, they are tied and left on the floor of a bamboo cell overnight to await certain death. Q: How do you make love while tied up? A: With a straw. This scene has to be seen (and heard) to be believed – Just Jaeckin was also responsible for directing “Emmanuelle”, and such a scene is his meat and drink. Amazingly enough, they escape certain death (yes, really!) only to be captured by a race of scantily clad 18 year-old girls…

At this point, some of you may be doubting this is a real film, and is instead merely the product of a deranged imagination. Let me assure you that it IS a real film and that this article is a true and fair account of what goes on in it, difficult though it may be to believe.

You might wonder how a race of pretty young things in rubber and foam spiked shoulder pads, bra, g-string and thigh length boots would survive undetected and without men, in the middle of a desert. Well, this film makes absolutely NO attempt to explain. Mind you, with all that pert female flesh bobbling around, this problem doesn’t bother the average trash film fan for long. 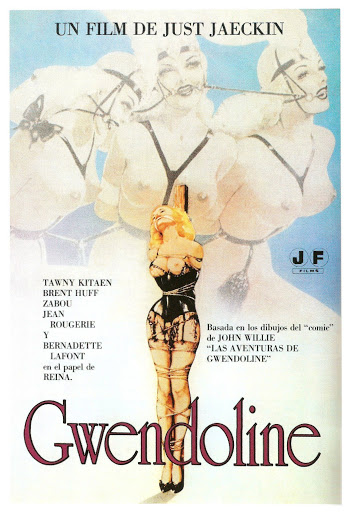 Somehow, in all the running around in white caves full of shiny machinery doing nothing in particular with lots of steam (Metropolis with the woman’s touch?), our hero and heroine disguise themselves as guards (Just how does Willard wear a woman’s g-string and why do the guards in these films NEVER recognise each other?). Pretty soon we have met the token mad scientist, enjoyed a Ben Hur style chariot race where the chariots are pulled by women, and laughed at more silly dialogue like “The Queen’s will is the will of the Queen” and “Let’s find the door and get out of here!”.

But true to form, Willard must make love to the victor of a fight to the death between the Queen’s best warriors, before dying horribly. I won’t spoil the climax, but just tell you he only does one of these…

Coming on like a soft-porn version of either “Indiana Jones and the Temple of Doom” or “Jane & the Lost City”, this film is guaranteed to infuriate any feminist who sees it. I can give it no higher praise than that, and finish with some more of the wonderfully cheesy dialogue :

Gwendoline: I’m scared, Beth. How do you make love to a man?
Beth: It’s much easier to make love than fight four warriors with your hands tied behind your back…