This one is very much a case of the cart coming before the horse, in that writer Tudor Gates was asked by producer Harry Styles to write a story about vampire twins, for the Collinson sisters. Styles had seen their pictorial in Playboy [the first twins to grace its pages: the October 1970 issue, should you be interested…], and boy, did Gates deliver. This is probably my favourite of the seventies Hammer productions – though less for the twins than for Cushing. He’d had to skip Lust for a Vampire at the last minute, and the film was the poorer for it. Here, he shows why he was missed, with one of his best performances – all the more impressive in tragic circumstances, it being Cushing’s return to the screen, in his first role since the death of his beloved wife, Helen.

His character, Gustav Weil, is definitely one of the most interesting in the Hammer filmography. Unlike Victor Frankenstein or Abraham Van Helsing, he wasn’t adapted from a previously existing character. He’s 100% original, and is probably the only heroic witch-finder in cinema history. Weil stands in sharp contrast to others of the era, such as Vincent Price’s Matthew Hopkins in Witchfinder General, or Reggie Nalder’s Albino in Mark of the Devil. Sure, he barbecues a local peasant girl or two early on. But he knows the source of true evil is local nobleman Count Karnstein (Thomas), descendant of a long line of decadent aristos. Or vampires, if you’ve been paying attention to the last few movies. 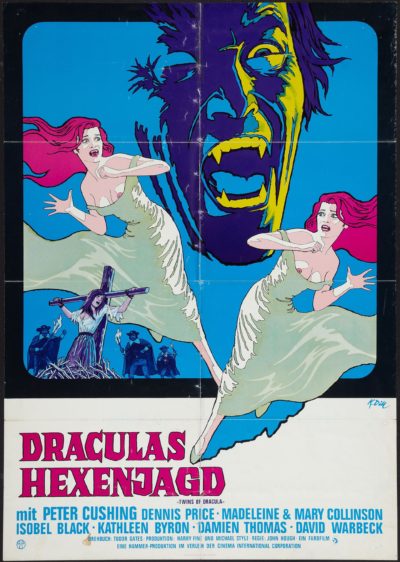 You also have to respect the fact that Weil doesn’t play favourites. When he discovers one of his twin nieces has become… a bit bitey, he’s not happy about it. But he insists on treating her like anybody else. He even administers the coup de grace himself, using an axe to deliver one of the most impressive decapitations in the studio’s output. That’s fair and committed to the cause, and he goes after the Count too, despite him having the protection of the Emperor. Perhaps the best thing about Cushing’s performance is how it seems to lift up everyone else’s. Thomas; Kathleen Byron as his wife; David Warbeck as the local schoolmaster; even the Collinsons. They all appear to have their best scenes playing against Cushing.

Speaking of the twins, I have to say, they are easily the best actresses of the glamour models Hammer tried converting into actresses. Bad girl Frieda and good girl Maria have genuinely and perceivably distinct personalities, despite having their Maltese accents replaced in post. They both come over as real people, which is better than some of the era, shall we say. Certain actresses I won’t name, seemed to be mostly delivery systems for their breasts, rather than actresses. This doesn’t skimp on cleavage, to be sure: I lost count of the number of “Frieda and her Twins of Evil” comments I made. But there’s only one real nude scene, and the Collinsons’ performances are credible enough, rather than embarrassing, and fit into the film well.

A couple of other points of note. Harry Robinson’s score seems to have strayed in from a spaghetti Western. Though it’s not inappropriate, given the amount of cantering around done by Weil and his witch-hunting colleagues on their horses. This is one of the few Hammer films to make significant use of the “vampires don’t appear in mirrors” element of lore. Though on the other hand, daylight has no effect at all. Karnstein also has a mute servant – perhaps making Roy Stewart the only black actor to appear in a Hammer period vampire film? He gets a great scene at the end, miming the approach of Weil and his mob, along with their weaponry. This severely discomforts his master, who is expecting merely (useless) fire, not pointy and choppy things.

But this is Cushing’s world. Everyone else is just in it through his grace. In an alternate universe, there’s a franchise centred on Weil, e.g. Quadruplets of Vexation. He has become a Chuck Norris-like figure, complete with mock facts, i.e. “There is no theory of evolution, just a list of creatures Gustav Weil allows to live.” In our universe, however, we’ll just have to make do with Twins of Evil. 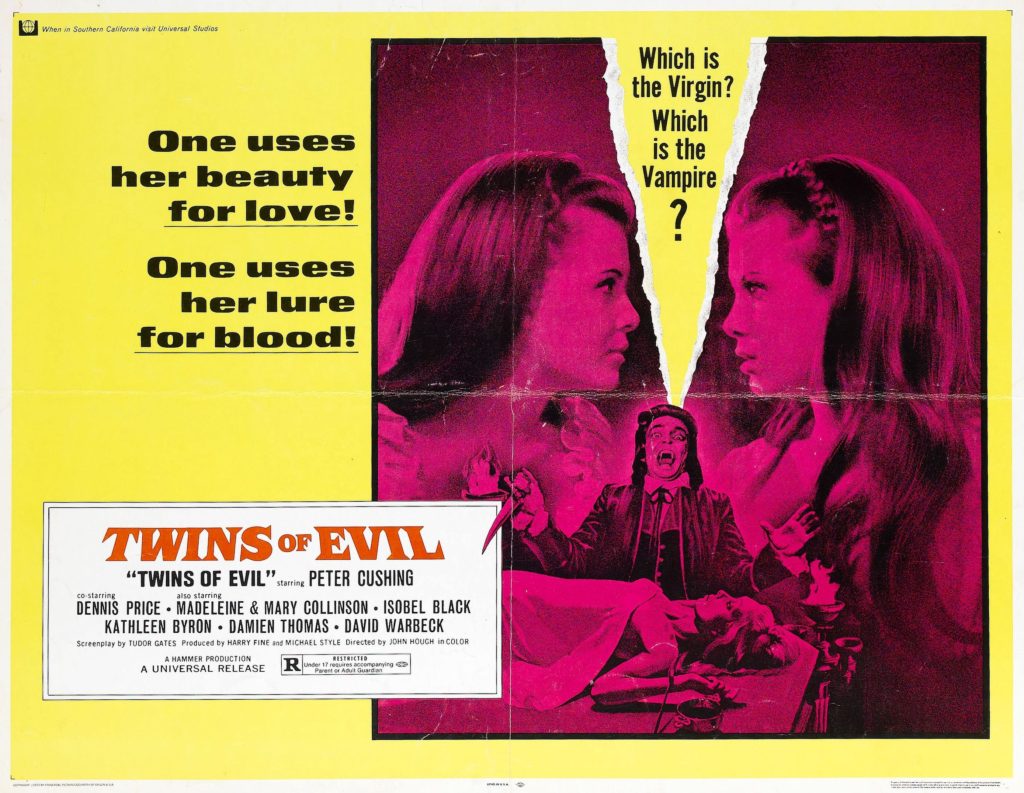 [November 2011 review] While the last in the Karnstein trilogy, this is a good deal more restrained, in terms of female nudity, despite the presence of Playboy playmates the Collinson, here playing recently-orphaned teenage girls Maria and Frieda. They’re sent to live with stern uncle Gustav Weil (Cushing), whose hobbies include… Well, actually, he only really has one: burning local maidens he and his mates in the ‘brotherhood’ think are witches. Local Count Karnstein (Thomas) rejects Weil and his behavior, which intrigues naughty twin Frieda, who sneaks out to visit the Count in his castle. Unfortunately, Karnstein has just summoned up a Satanic emissary who has converted him into a vampire: Frieda soon follows soon, and the mob are on her tail, eventually capturing her. They debate what to do, and condemn her to death, despite Weil’s protests, as he now realizes the error of his ways. However, Karnstein has switched twins on them, replacing Frieda with Maria; will the swap be discovered in time to prevent an unfortunate mistake?

This was dragged out, simply because Chris had been playing a Facebook slot-machine game based on the film. Quite why they chose this rather obscure one, I don’t know, but after hearing Cushing proclaim, in the way only he can, “The Devil has sent me… twins of evil!” we just had to dig up the movie. And it’s every bit as good as the clippage suggested: this has got to be one of Cushing’s best performances, with a particularly ambiguous character, who goes from delusional witch-finder to genuinely heroic, once he finds some “true” evil to fight. Though both dubbed, the Collinsons do what’s needed of them, and if the film has a weakness, it’s Thomas, who’s a tad too bland to be a good nemesis, even if one suspects even Christopher Lee might wilt in the incandescent heat of Cushing’s performance. It does feel more like a throwback to the kind of film the company was making a decade ago. That’s not necessarily a bad thing, at least from a modern viewpoint, since I’ll happily trade breasts for good acting. Must be getting old… B+