Well, that was certainly… something. It begins as an awkward family festive get-together, complete with racist grand-dad, stupid sister, etc. in which Nick (Gittins) and his girlfriend Annji (Naik) find themselves trapped. Except, they wake up on Christmas morning, and find themselves literally trapped, in that someone (or something?) has sealed all the exits of the house. The Internet and phones are down. The only information comes courtesy of the TV. Initially, it is broadcasting the title of the film. But the messages it displays become more menacing and invasive, for example, advising them that all food is contaminated. Worse, they appear to be targetted specifically at the unwilling residents of the house. Natural disaster? Terrorist attack? 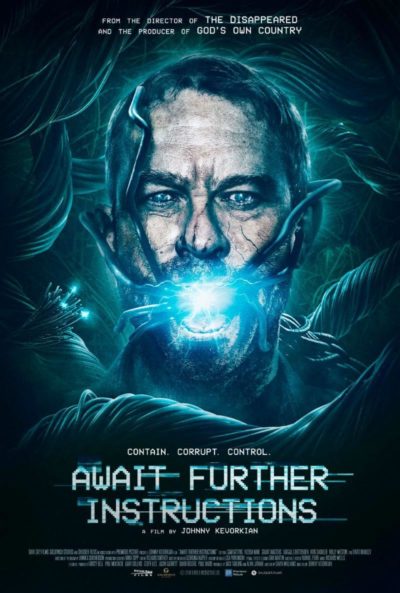 Not even close. The answer, it turns out, is considerably more bizarre than you can imagine. It’s something David Cronenberg might have conceived, after eating too much pizza, only to discard it as “far too weird.” I do have to say, I’m not sure the explanation fits all the facts, and it’s one of those cases where I’d like to strap the director down and interrogate them about it. [And when I say “not sure”, I’m being polite. I’m pretty fucking certain it doesn’t] The characters are mostly painted in broad strokes – David Bradley, Walder Frey in Game of Thrones, is great as the grand-dad – and some of the interactions do seem artificial. But I suspect this may be intentional. Certainly deliberate is the name of the family (the Milgrams), and their address (Stanford Drive), referring to two of the most famous experiments in coercion.

However, that appears to be a bit of a red herring. Because what happens in the final reel is off the charts mad, and personally, I feel it can only be respected as such. I admit, it is the kind of thing into which you will either buy wholeheartedly, or not at all, and can see why a lot of people hated it. I don’t even agree with the rather sledgehammer approach it takes to some of its topics, which would have benefited from rather more nuance. It might have been better off embracing the eventual insanity earlier, or perhaps building towards it more gradually.

On the other hand, that could have robbed the ending of its delirious berserkness. It has been quite a while since I reached the end of a movie and though “What the fuck did I just watch?” – well, at least in a good way. Credit to Kevorkian for daring to pull off such a sudden switch. This goes from psychological thriller, where the greatest threat is inside the house, in the shape of the residents’ insecurities, to become the bastard child of H.P. Lovecraft, Cronenberg and Black Mirror. We just need someone to give Guillermo del Toro $200 million, for the sequel showing what happens after the credits roll here.

Until then: I, for one, welcome our new, tenticular, self-aware household appliance overlords.