This is one of those films which feels like a gimmick, and as such, you go in wondering if it has anything more to offer. Yet, somehow, it does. Despite the cast list above, there is really only one character in this, policeman Asger Holm (Cedergren), who has been busted down to taking incoming calls, pending the outcome of some kind of disciplinary case against him. He’s not exactly happy about this, and we gradually see the issues that might have caused him problems. Quick to anger, he also has the traditional issue of policemen (and women!) in Scandinavian media: he’s not exactly a people person. This is all nicely and swiftly established, as we see him handling not-so-emergency calls from the public. 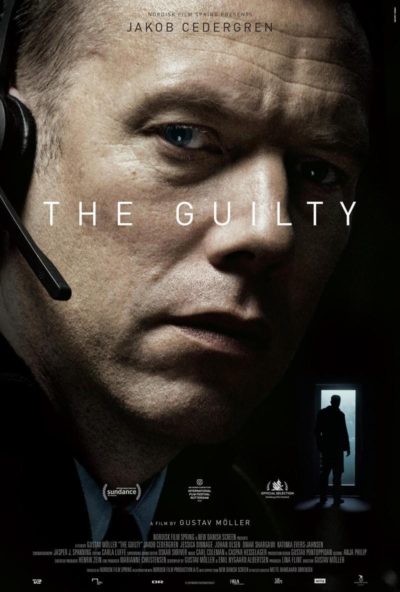 Everything changes when his final call of the night is from a terrified woman, Iben (Dinnage). Unable to speak directly, she manages to clue Asger in, that she has been abducted from her home, by her ex-husband (Olsen). With limited information, and the help of his former partner, Rashid (Shargawi), in the field, Holm has to try and piece together the clues, locate the woman and return her to her children. Except, there are a couple of quite savage and unexpected twists, which make this considerably different from a normal incident of domestic violence. Cinematically, too, it’s different as well, because we never leave Asger. It unfolds entirely in two rooms at the emergency call centre where he’s working. We don’t see Iben, or anyone except Holm and a couple of fellow dispatchers.

Yet despite deliberately going against normal standards, it’s no less interesting than a normal film. Indeed, the fresh approach arguably adds to the tension. You are entirely in Asger’s shoes: you know only what he does. That matters, because he’s not infallible. While the decisions he makes aren’t illogical, they’re based as much on his prejudices as the information. We, the audience, probably make the same mistakes, and that creates a sense of investment which is greater than usual. It also unfolds in real time, and there’s a sense of urgency given the circumstances, which not everyone shares. Often, it feels like it takes an age, for example, before people answer the phone.

The title can be interpreted in a variety of different ways, and will likely cause some re-evaluation after the credits roll. There are some points which did stretch credulity somewhat: it’s not clear whether Asger doesn’t know all emergency calls are recorded, or if he just ceased to care, because some of the things he says are… Well, potentially highly damaging. I also severely doubt a case like this would be left to a single dispatcher to co-ordinate and run the investigation. Yet it’s worth allowing these, since they help both the main story-line, and the subsidiary one about Holm’s previous behaviour, reach appropriate conclusions. I had no trouble letting them pass, and this is a film which succeeds because of its limitations, rather than despite them.