After surviving a bloody shoot-out, an unnamed man (Adkins) slips across the border into Mexico, with a hold-all containing a pile of cash. He ends up in the town of El Fronteras, hoping to make his way from there to Acapulco. But the lawless place has been taken over entirely by the local cartel, who now control every aspect and don’t exactly welcome new faces. Getting out of the lawless settlement will be harder than getting in, especially as word gets around about the contents of his luggage. Everyone wants a piece, and his only allies are barmaid Anna (Yates), and dogged cop Lt. West (Slater), making his way along the man’s trail. 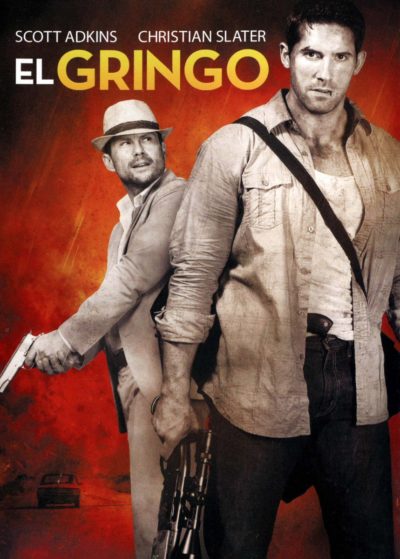 This was filmed in Bulgaria, which is never going to be a good substitute for Mexico, not matter how much of the film is shot through a sepia filter (answer: almost 100%). It might have been more original had they actually set it in the former Eastern bloc, in a poverty-stricken village. Nah, why bother, when you can trot out the usual lazy clichés? The other major negative is a headache inducing style of editing, which is incredibly intrusive, often in the simplest of scenes, and rarely adds anything of value. It feels as if Rodriguez is aiming for something like his namesake Roberto, except the maker of obvious inspiration El Mariachi knows the value of restraint. Eduardo would apparently need to look that word up in the dictionary.

However, in between the berserk editing, I was adequately amused. In some ways it feels like a precursor to John Wick, with its reluctant hero possessing a no-nonsense style, and just wanting to get on with his life. There’s even a dog in this one too. The action peak is probably reached when the man is trying to reach the bus-station, for the one departure a day out of this godforsaken hell hole. It feels like everyone else in the town is lined up to stop him. Their mistake. It’s a sequence which makes very good use of the claustrophobic alleys, and is not far short of being on par with the nightclub shoot-out in Wick.

It does need more work on the antagonist front, partly due to a twist about three-quarters of the way in, requiring a sharp shift in focus as a result. But before that, it’s a bit vague on the specifics. Is his enemy the guy in Day of the Dead face-paint? Or the local, inevitably corrupt sheriff? And do they have sheriffs in Mexico? That question concerned me about as much as the pointless sex scene, which neither was necessary to the plot, nor delivered Yates’s goods. But she has been published in the Journal of Molecular Immunology, I kid you not. These academics don’t just whip their top off for anyone. In the end, I’d say this met expectations, providing 90 minutes of mindless violence and adequate entertainment. Does feel like some opportunities were missed though.