This was the biggest film of the eighties I’d never seen (a title now held by another Cruise-movie, Rain Man). Having watched it… yeah, I can see why it took me 36 years. Snazzy aerial footage only goes so far in papering over the wafer-thin plot, and Tommy at a point where he was still figuring out what that whole “acting” thing involved. Then again, it is a Tony Scott movie, so style over substance is very much par for the course, even if this was only his second feature, after The Hunger. [He was hired for this, largely because of a commercial he’d done for Swedish fighter/car company, Saab] Nice soundtrack though: I did not realize Giorgio Moroder co-wrote Berlin’s Oscar winning mega-hit, Take My Breath Away. 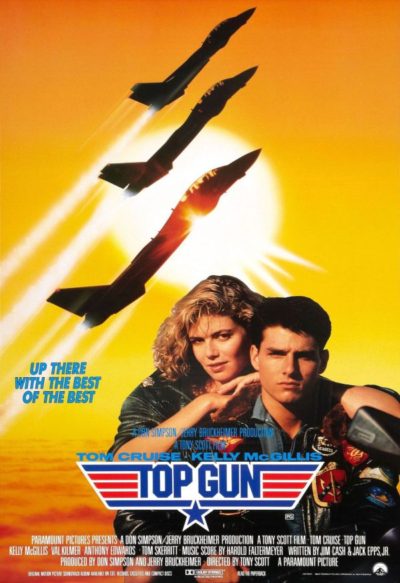 The story is almost painfully simple. Cocky fighter pilot, Maverick (Cruise) is sent to attend the titular Naval Fighter Weapons School with his pal Goose (Edwards), and test his skills against others, such as Iceman (Kilmer), with whom an antagonistic relationship is immediately developed (top). He also woos civilian contractor Charlie Blackwood (McGillis). A tragic accident, however, causes Maverick to question his entire self-worth. Can he recover in time to complete his training and engage in a heroic battle with Russian fighter planes, while also keeping the girl? I’m sure you already know the answer, though actually caring about it is another matter. I was far more amused by Goose, the self-effacing, happily married sidekick, with the world’s most sarcastic laugh.

But what the hell does Goose do sitting behind Maverick? He isn’t flying the plane, and doesn’t operate the guns. Wikipedia tells me he is a “radar intercept officer.” I’m sure that’s very important, and am not one whit better off in my ignorance. That the film never bothers to explain his purpose is indicative of its problems: who cares about such things, when you can have a sequence of Maverick buzzing a control-tower and whooping loudly? Frankly, I can’t disagree with Iceman, when he said “You’re everyone’s problem. That’s because every time you go up in the air, you’re unsafe. I don’t like you because you’re dangerous.” Except, I also don’t like Maverick because he’s an arrogant, entitled prick – perhaps the biggest such in the pantheon of 80’s cinema.

Then there’s the gratuitous shirtless volleyball match. This is the gayest thing I’ve seen outside of a David DeCouteau movie, and Mav heading off on his bike to bang Charlie afterward, doesn’t make it any straighter. I hope she got tested, that’s all I could think: it was the eighties, after all… So, in many ways, it’s a disaster movie in both senses of the word, not least because you’re here for the action set-pieces. Which in this case are largely unadulterated plane porn: its closest cousin is probably something like The Fast and the Furious. That said, if parts of your body don’t get hard during them, you’re probably some kind of Commie. I repeat: it was the eighties…