I will admit, the first time I saw adverts for this, I couldn’t figure out why Amazon was making such a fuss about a seven-year old Tom Cruise movie. Oh, hang on: my mistake. That’s Edge of Tomorrow. You know: the other time-travel SF-action war movie? The one with less spiky aliens? Whatever. Anyway, turns out this is a $200 million, straight to streaming flick, which pandemic experience has shown to be a warning sign. Mulan, Wonder Woman 1984, Godzilla vs. Kong, Mortal Kombat, Cruella. All more or less mediocre: I would have been miffed if I’d paid to see them, but they were all okay as freebies. This is more  of the same. Whoever was in charge of the action scenes clearly knew their way around a giant fireball. The rest? Not so much. 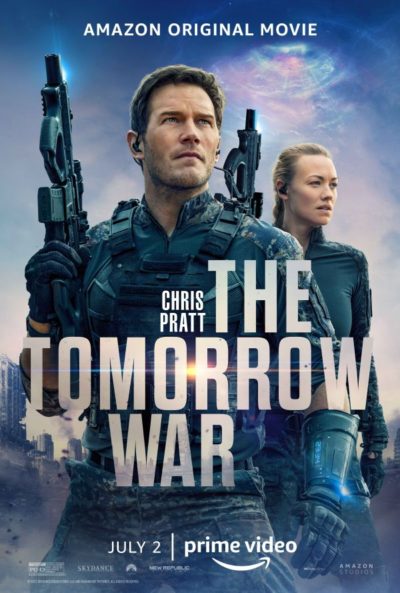 The high concept here is that visitors from the year 2051 come to the present day, and report humanity is on the verge of extinction due to a war against alien monsters known as Whiteapikes. They’ve jumped back to recruit people from the current time – those who’ll die before the war starts – in order to join the fight. One of those drafted is ex-soldier, now biology teacher Dan Forester (Pratt), who has to leave his wife (Gilpin) and young daughter, to be catapulted almost thirty years into the future. Humanity’s last hope is a toxin, which he brings back to the present day, just before the time machine is destroyed by Whitespike attack. Dan eventually realizes the Whitespikes are already on Earth, and with his estranged father (Simmons), mounts an unauthorised mission to locate and destroy them, thereby averting the war, as well as his own future death.

None of which, to be blunt, makes much sense. If you have a time-machine, it doesn’t take an expert to figure out much better ways to use it, than pull forward largely untrained cannon fodder from the past into your future war. Then there’s the entirely pointless nature of the “toxin” – because blowing the fuckers up with C4 seems to work perfectly well. Finally, the way a high-school teacher, with the aid of a pupil who likes volcanoes, manages to figure out in about five minutes, what the massed brains of the world couldn’t get in thirty years. Disbelief is not so much suspended, as engaging in a lengthy session of auto-erotic asphyxiation.

But if you’re looking for a cross between Starship Troopers and The Thing, without the satire, tension or film-making talent – hey, you could do a lot worse. The monsters are the stuff of nightmares, and the $200 million reported cost seems to have been spent fairly wisely, in terms of production values. Certainly, very little of it seems to have gone towards Zach Dean’s script, beyond the beer-mat on which is was apparently scribbled. Even the usually affable Pratt can’t do much with the soap-opera which passes for family drama here. Best ignore all that, and just wait for the Whitespikes to show up.