A truly stellar cast here. In addition to the above, including Hepburn’s first film in nine years (her son wanted Mum to act with James Bond!), it feels like everybody in this is somebody. Richard Harris, Denholm Elliott, Ian Holm, Kenneth Cranham. British comic actors Peter Butterworth, Bill Maynard, and Ronnie Barker as Friar Tuck. Even King John’s young Spanish bride, Isabella, is played by Victoria Merida Roja… who’d go on to be Pedro Almodovar’s muse, Victoria Abril. [Though comments like “His queen is 12 years old and all he does is stay in bed with her!” have not aged well.] So, why did I not enjoy this as much as I expected- and indeed, wanted to? 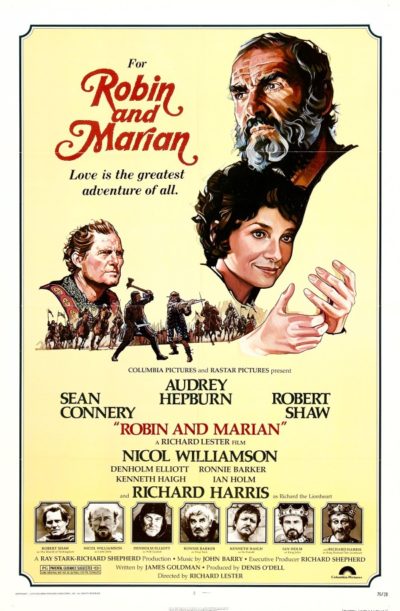 I like the idea, this “different” take on legendary figures predating by decades the likes of Maleficent. Here, Robin Hood (Connery) and Little John (Williamson) return to England following the death of Richard the Lionheart, after twenty years away. They find the Sheriff of Nottingham (Shaw) still hassling Maid Marian (Hepburn), though she is now the Abbess of a nunnery, having given up hope of ever seeing Robin again, and attempting suicide. He insists on riding to the rescue, re-awakening his famous feud with the Sheriff. Though being the hero the folk-songs describe, is a little harder when you are no longer in your prime. Scaling castle walls, for example, will now leave you wheezing for breath, and quite unequipped for battle on top of them.

I think it’s the awkward mix of tone that derails this. I expected more romance than action-comedy, and what there is to the love story, doesn’t convince at all. Marian falls back in with Robin far too easily. Perhaps the punch to the jaw he gives her, knocking her unconscious in order to “rescue” Marian from the Sheriff, led to a concussion? [I’m also reminded of Connery’s infamous quote, in a 1965 interview with Playboy, “I don’t think there is anything particularly wrong in hitting a woman.” Awkwardly, by the tenets of strict gender equality, he’s not wrong] The ending is equally problematic. I think Lester was aiming for a grown-up version of Romeo and Juliet, but Marian comes off more like Annie Wilkes from Misery. I mean: “I love you more than God”? Stalker much?

In the end, I enjoyed it more as that action-comedy, just sitting back and appreciating an impeccable cast, who mostly deliver as you would expect. This is considerably more in Lester’s wheel-house, and there’s a very human, fallible aspect to this portrayal of Robin Hood, which stands in sharp contrast to the almost universally heroic depiction of the character in other movies. Though you certainly need to ignore the fact that the Spanish locations in which this was filmed, are a very poor substitute for Nottingham and the English Midlands. Also not helping matters: this, with its minstreling about brave Robin, came out a year after Monty Python and the Holy Grail. So when the opening has a knight in a familiar helmet, hurt his finger loading a catapult, you can be forgiven for muttering, “It’s only a flesh wound…”