I may be one of the few people on the planet who didn’t hate the original Suicide Squad. It wasn’t great, for sure, but Robbie’s Harley Quinn just about carried the movie to acceptable – certainly, more so than she did in Birds of Prey. What’s odd is, while she was easily the best thing in the 2016 version, she’s perhaps the weakest link here, with Harley feeling like tacked on fan service. She could easily have been removed entirely, and I don’t feel the film would have suffered. That is, however, perhaps a testament to how much else is going on in Gunn’s script, which is less sequel, more of a reboot that pretends the original never happened. 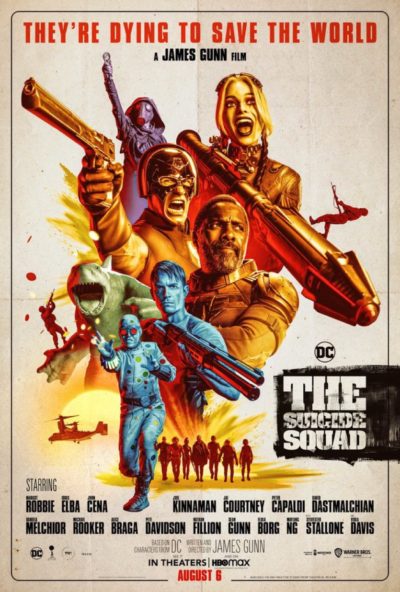 It begins with a massive red-herring, setting up Suicide Squad 1.0 who gets destroyed as a diversionary tactic in order that Suicide Squad 2.0 can proceed without anyone noticing. We then flash back to the latter’s creation, under the unwilling leadership of Bloodsport (Elba). Their mission, not that they have much choice in accepting it, is to infiltrate Jotunheim, a secret research project on a Latin American island, run by Dr. Gaius Grieves (Capaldi). The country has just undergone a military coup, and destroy its contents before they can fall into the new regime’s hands. Except, it’s not as simple as that. Is it ever? When the shit hits the fan, the Squad have to decide on which side of the moral fence they stand.

Their choice is not much of a surprise, and that goes for much of the film. It seems more intent on playing at being subversive, rather than actually being subversive. For instance, the reality of the super-patriotic Peacemaker – best line, “I cherish peace with all of my heart. I don’t care how many men, women, and children I kill to get it” – is no shock to anyone who has seen The Boys and its similar character, Homelander. It’s now entirely as expected, as is the anti-authority stance. If Gunn really did have full creative freedom here, that’s disappointing, with the end result a pale shadow of some of his earlier work, in terms of inappropriateness. Go watch Tromeo & Juliet, then get back to me.

This is still a decent amount of fun. Though, again, it’s perhaps telling that the character we loved most, didn’t exist: the CGI Nanaue, a voracious land-dwelling shark voiced by Sylvester Stallone, which was so deliciously dumb and, fortunately, impervious to damage, that it was a joy to watch. [You know us: we love our shark mayhem] Give us a Nanaue spin-off, stat. The finale… Well, we certainly didn’t end up in the spot I expected this to go, and it provides the best kaiju smackdown I’ve seen since Godzilla, King of the Monsters. However, like most comic-book films, I’m not sure how much rewatchability there is here. R-rating or not, it feels thoroughly disposable, and I suspect will largely be forgotten quite quickly. Maybe they’ll get someone else to remake it again, in 2026.