The film poses a problem. I have only one field for “country,” so does this get tagged as Hong Kong or UK? Because it’s a real monster mash-up, anchored by Cushing at its core, but featuring vampires which couldn’t be more foreign and less Christopher Lee-like if they tried. This was the result of a team-up between Hammer and the equally legendary Shaw Brothers studio of Hong Kong, who had experienced success in bringing the martial arts genre to the world. Like Hammer (originally founded in 1934), they had been around for longer than you think, the three Shaw Brothers involvement with the film industry starting in 1925. In the seventies and eighties, they collaborated with a number of overseas partners, including German, Italian and American studios. Perhaps the best-known result of these is their co-production of Blade Runner.

But in 1973, to quote cultural commentator Carl Douglas, “Everybody was kung fu fighting.” Films such as Five Fingers of Death, the Kung Fu TV series and the work of Bruce Lee before his untimely death in July that year, had made martial arts a global phenomenon. Hammer scribe Don Houghton, who wrote Dracula A.D. 1972 and The Satanic Rites of Dracula, had a Chinese wife, and her father knew Run Run Shaw. This connection helped him pitch his idea for a martial arts/horror crossover, and Shaw Brothers agreed to fund half of the production. The other half came from Hammer, who strayed far from their usual Southeast England territory, filming at Shaw’s Hong Kong studios and around the British territory from October 22 to December 11, 1973. 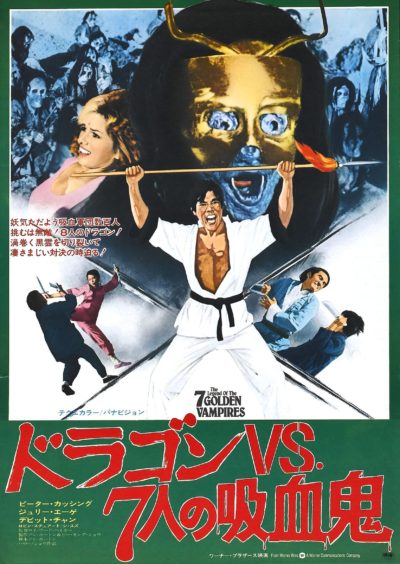 It was not an easy production, with any number of culture clashes between the two groups, over everything from whether dialogue audio should be shot in sync, or dubbed in later. Baker infamously claimed he could film martial arts sequences better than the locals, annoying Shaw Brothers to the point they used Chang as an uncredited director on additional fight scenes. The version of the film released in Hong Kong, now lost, ran 110 minutes, 21 minutes longer than the UK print. In contrast, when the movie eventually came out in the United States – as The 7 Brothers Meet Dracula – it had been edited down to just 75 minutes long. And that release was not until 1979, by which point everybody was no longer kung fu fighting.

The vampire is certainly not unknown in Chinese lore. Indeed, they had been making their own vampire movies since the thirties, perhaps peaking with the Mr. Vampire series. [How I wish that franchise had included a cross-over, with Peter Cushing fighting alongside Lam Ching-Ying] But it’s a radically different creature, and the film doesn’t do a good job of explaining the changes. The injection of Dracula is particularly clunky. In 1804, Chinese monk Kah (Chan) travels to Transylvania, to ask for Dracula’s help in restoring the power of the 7 Golden Vampires. Dracula seizes the chance to take over Kah’s body, to escape the imprisonment of his castle. He travels to rural China and becomes head of the group, terrorizing the local population. Though, this being 19th-century China, nobody pays much attention.

A century later, however, Professor Van Helsing (Cushing) shows up, lecturing at Chungking University about vampires. He gets a cool reception, the locals being too modern for such fairy-tales. The exception is Hsi Ching (Chiang), who knows differently, because his grandfather (also played by Chiang, in an extended flashback) fought the 7GV, and managed to destroy one of them. He’s very interested in using Van Helsing’s expertise to destroy the clan for good. Accompanied by the Professor’s son, and touring bit of ScandiTotty, Vanessa Buren (Ege), they head out on the perilous journey into vampire territory. It’s not long before they come under attack, Dracula somehow having become aware of their mission. Fortunately, Hsi’s brothers, and sister Mai Kwei (Shih Szu), are there to offer protection and – what are the odds? – are all very good at kung fu.

As mentioned, these are not your suave Euro-vampires. They lack the power of speech, outside of Dracula (played by John Forbes-Robertson, though even his performance was dubbed,by David de Keyser), and have lumpily unpleasant faces. It makes sense why they hide behind the golden masks. They seem to have the power to raise the dead to act as a zombie army on their behalf, and for obvious reasons, do not shy sway from crosses. Van Helsing theorizes they might be repelled by the image of Buddha; this is never put into practice. Instead, the tried and tested method of stabbing through the heart does prove equally as effective as their Western counterparts. These differences may explain why Van Helsing largely takes a back seat, except when it’s time to confront Dracula himself. Otherwise, the Professor waves a burning brand about a bit, and largely lets Hsi and his clan get on with the fighting.

I also note the presence of a couple of cross-cultural romances, which seems quite daring for the era. Van Helsing Jr. is attracted to Mai, though that goes no further than a chaste kiss. Hsi has the hots for Vanessa – even if she early on seems to have a but of crush on Van Helsing Sr. I blame daddy issues. Only one of these romances makes it to the end credits, however, thanks to a member succumbing to a vampire and having to be put out of their misery. Indeed, the body count on both sides is quite high, with more vampires crumpling into dust here than over perhaps the previous decade of Hammer movies combined. It certainly isn’t short on action and some of the fights feel very epic in scope, with a lot more participants than the British studio could typically rustle up.

However, it does seem an unnecessary cross-breed, which doesn’t play to the strengths of either studio or genre. At times, it feels almost like switching channels between two “classic” films: a Hammer horror, and a Shaw Brothers chop-socky film. The two elements never mesh satisfactorily, and while each half has its pleasures, I found myself wishing I was watching one damn thing or the other.