“Pretentious? Moi?” That’s how I felt during the opening credits of this rape-revenge drama – though I guess, rape-anti-revenge is probably closer. Slow-motion “artistic” imagery of a wolf dragging away a rabbit, plays out over a carefully constructed, discordant soundtrack. We are clearly in Very Important Movie With Something to Say territory. Nothing over the 107 minutes which followed, did much to change that opinion. Not even the Extremely Erect Penis (real? fake? stunt dick?), which will perhaps stick in your mind, waving gently in the breeze, when any moral message this has to offer, has been long forgotten. 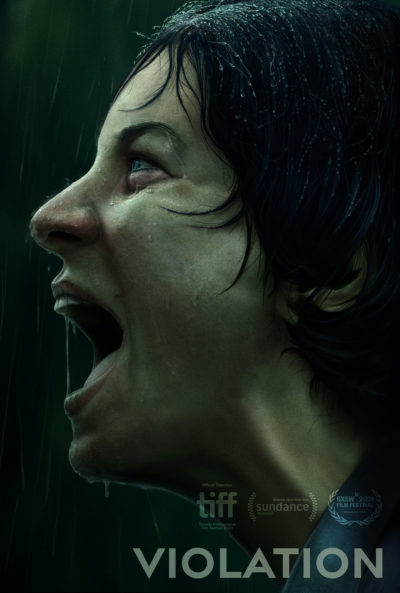 The central character is Miriam (Sims-Fewer), who is in a Troubled MarriageTM with Caleb (Abili). We know this, because he gives her the silent treatment on the way to visit her sister, Greta (Maguire), and her husband, Dylan (LaVercombe). At first, the latter’s relationship seems perfect, the very antithesis of Miriam and Caleb. But we gradually discover the truth is not that simple, the murkiness enhanced markedly by the adoption of a non-linear approach. I’m always suspicious of this. It’s basically cheating your audience, manipulating them by concealing information which is known to the characters, thereby informing their actions. That’s certainly the case here, as Miriam seduces Dylan – cue the appearance of Mr. Flagpole – before smacking him upside the head with a baseball bat, and a swing that’d make Roy Hobbs proud.

So, she’s just some loony bitch? Of course not! Subsequent footage prove she’s actually some loony bitch with a motive. Specifically, that Dylan had previously raped her, after a fireside chat about how sucky their respective spouses were, and a breakdown of communication over the difference between “Don’t… stop…” and “Don’t stop.” [Hello, we have Bill Clinton’s lawyer on line one.] Now, we established earlier how protective Miriam had been of her sister. That’s how we get to her going Casino on Dylan’s head – and she’s just getting started. I will say, the film gets absolutely and excruciatingly right how hard it is to kill someone and dispose of the body, both physically and psychologically. The strangulation which puts Dylan away, takes forever, and we also see Miriam puking her guts out, as she drains his corpse of blood into a cooler.

However, well before we get to the end (which will do for vanilla ice-cream, what The Untold Story did for steamed pork buns), I had lost interest. Miriam is clearly a badly-broken individual; whether as a result of her trauma, a previously existing disorder, or some combination thereof, doesn’t really matter. There’s little to which a normal, well-adjusted member of society can relate in her appalling actions, and not much effort made to provide any such connection. All the close-ups of the natural world – and the directors are very fond of them, to the point they appear to have a great future in wildlife documentaries – cannot hide the emptiness at the film’s heart.