Perhaps the best way to sum this up, is if someone decided to remake Napoleon Dynamite, but opted to remove all the actual humour. It’s a brave thing to do, but completely pointless. Now, I must admit, the first time I watched Napoleon, it left me cold. But there was still enough of something there, to convince me to re-watch it, and then I “got” it. Here, I found almost nothing. The only point of amusement was the hotel bar where the background music was always Cerrone’s disco classic Supernature (lyrics by an uncredited Lene Lovich, fact fans). When that’s the comedic high spot of a movie, you’re in for a long 108 minutes. 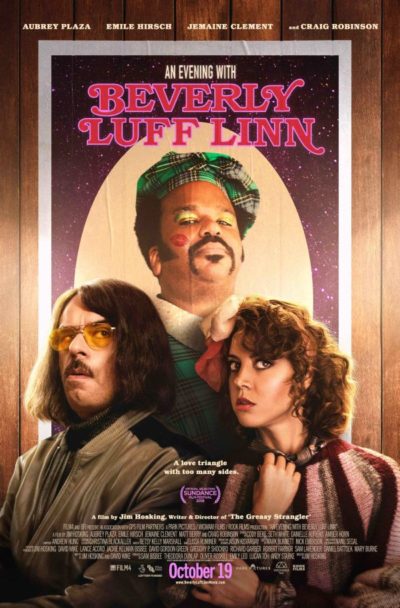 It’s basically an extremely twisted rom-com. Lulu Danger (Plaza) runs off from her marriage to try and re-connect with old flame Beverly Luff Linn, a cocktail lounge performer. For reasons both too complex and too uninteresting to go into, she’s accompanied by Colin Keith Threadener (Clement), a drifter/wannabe enforcer, who falls for Lulu. They reach the hotel where Luff Linn is scheduled to play, only for the show to be repeatedly delayed. The artist’s manager/companion, Rodney (Berry) is none too pleased with Lulu’s return, and acts to come between her and Beverly. Absurdist comedy ensues. As well as a song about football referees, which sounds as if it was dumped from a Half Man Half Biscuit LP, for being a bit shit.

Evening was recommended to us by our son-in-law, in such effusive terms this could have been Monty Python and the Holy Grail, and still would not have matched his hype. You could say my actual reaction reflects a theme of the film: how life will mercilessly crush your hopes and turn them to pathetic disappointment. For example, Luff Linn’s performance singularly fails to live up to the “magical” experience promised. I can confidently say that this is the kind of film that you either love or hate. I can equally confidently say I did not love it. Hosking is clearly trying to pump up the level of awkwardness to the max, in characters, plot and dialogue. But there are few things more awkward, than a “comedy” which isn’t funny.

Now, I’m not averse to absurdist humour on principle: Python, League of Gentlemen, etc. The problem is, this appears to concentrate entirely on the “absurdist” part of the equation, and provides little or no reason for amusement. The film’s resulting rhythm has pauses for laughter, which was conspicuous by its absence in our living-room. Hosking seems particularly unaware of the difference between “quirky” and “unlikable”. This may be the biggest difference to Dynamite. While the characters there were undeniably losers, they had a certain nobility to them, and I could see elements of myself in them. The same can’t be said here. These feel like an alien species, to whom I couldn’t relate or sympathize with. The next time the son-in-law recommends a film, I’ll just say no.