There’s a certain poignancy as we come into the final stretch of this project. It seems as if every film draws a line under one or more aspects of Hammer. The last film starring a certain actor. The final entry in one of their franchises.  In this case, it’s a bit of both, bringing to an end Hammer’s adaptations of Mary Shelley’s classic. And it finishes as it began, in the hands of the director perhaps most connected to the studio: Terence Fisher. It was a return after a long break for him. Fisher’s previous film had been back in 1969, with Frankenstein Must Be Destroyed. His career was then derailed after being hurt in a road-accident, and this was his swan-song. Not just for Hammer – his 29th movie for them – but as a director overall, since he retired thereafter, passing away in 1980.

It therefore truly feels like the end of an era. But, speaking of the ending, this is notable for being the entry where Baron Frankenstein (Cushing) basically gets away with it. He engages in some particularly questionable behaviour, though his worst transgression (which we’ll get to) is fortunately derailed before he can put it into effect. But the only person who suffers any actual consequences here is the monster – arguably the most innocent of anyone here. It’s not as if he asked to be created, and while he wields a mean broken carboy, feels more put-upon than perpetrator. His fate, however, is especially gruesome. The Baron, in contrast, says at the end, “We must get this place tidied up so that we can start afresh,” noting that there is “plenty of time.” Barely an inconvenience, considering most of the previous entries ended with him apparently dead, arrested, or at least run out of town. 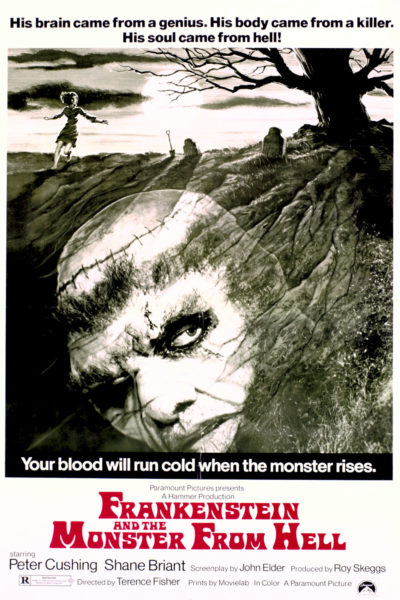 This one begins with Simon Helder (Briant), a young scientist who has been inspired by the Baron’s work. When the authorities become aware of his work, Helder is declared insane, and sent to the local asylum. By happy chance, it’s the same one where Frankenstein had been sent previously, though he died before being released. Or did he? For it turns out, he blackmailed the head of the facility, and is now physician there, under his new identity of “Dr. Carl Victor”. While his hands are too badly-burned for him to carry out surgery (a reference to the fire at the end of Destroyed), he has been carrying on his research. The residents provide a source of raw materials, and mute inmate Sarah (Smith) had been doing the work, under Frankenstein’s direction.

The Baron is glad to have a new assistant, and teams up with Simon on his current project. This is Schneider (Prowse), a homicidal maniac whose frame is being gradually transformed, with new hands, eyes and, eventually, the brain of a genius inmate whom Frankenstein convinces to commit suicide. But, as ever, the hulking brute still lurks just below the surface, and Schneider – or what’s left of him – is none too happy at the transformation. Will there be a rampage or two? Of course there will! Fortunately, this happens before the Baron can use Schneider for his intended goal: to rape Sarah, curing her of her trauma-based muteness. It’s kinda hard to sympathize with Frankenstein much in this incarnation.

Back in the day, there were often rumblings about gorier versions of Hammer movies being released in the Japanese market. While often just rumour, in this case there is truth to it. Up until 2014, the only uncut version was the Japanese release, with various scenes of surgery, throat-slicing and the monster’s destruction being left on the floor otherwise. For instance, frequently edited was an operation scene where the Baron uses his teeth to assist Simon. [According to Briant, real blood was used, Hammer getting expired stock from the local blood bank] It is definitely one of the most explicitly gory Hammer movies of them all and, as previously mentioned, is also notable for its cynicism, with Frankenstein showing few redeeming features as a character, and not receiving his just deserts. It may be the closest the studio came to the nihilistic new wave of horror, like Texas Chainsaw. 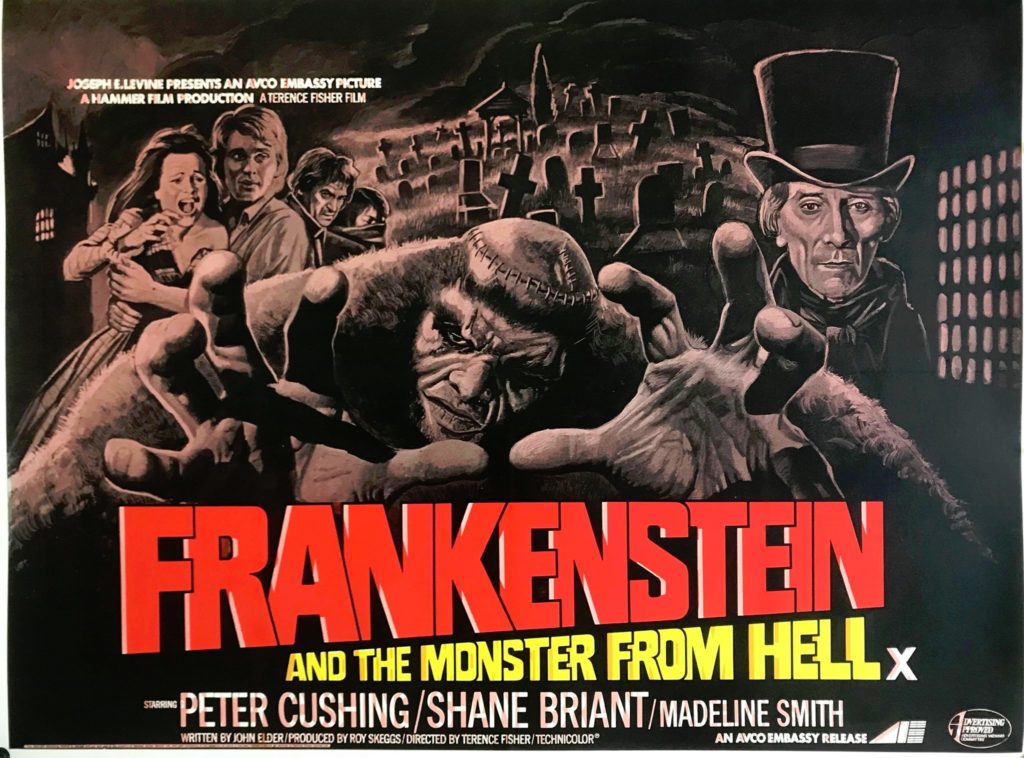 On that basis, I’m not a real fan. Part of the Baron’s appeal to me is a balance between good and evil. He seems genuinely committed to scientific progress, albeit by any means necessary. Here, it’s too skewed towards the latter, with Frankenstein’s God complex coming out, not helped by Simon toasting him as “Baron Frankenstein, creator of man.” Matters are not improved by the unfortunate wig worn by Cushing, or the remarkably shoddy model effects used for the asylum exterior. After the opening, it takes place entirely within the confines of the facility, giving it an obviously stagey feel, in a way not seen since The Man Who Could Cheat Death, which was indeed an adaptation of a play. Here, it feels more like a way to cut costs.

What salvages this from disaster are the performances, each actor bringing something different to the table. Smith and Prowse perhaps have the hardest jobs. Largely robbed of dialogue and so forced to act in other ways, both manage to make their characters sympathetic. Cushing elevates everyone around him as usual, and by this point doesn’t so much play the Baron, as inhabit him like a well-worn coat. Briant, also in his final film for Hammer, has a genuine moral arc, initially hero-worshipping Frankenstein, until he discovers the depths to which the Baron will stoop, a line Simon will not cross. However, I can’t say it’s enough to overcome the problems in production and script. Filmed in 1972, it was not released until two years later, to mixed critical reception and general audience disinterest. You could say this was the start of the studio’s final decline, and I wouldn’t argue.