In quite the contrast to previous years, this was the sole genre entry Hammer produced in 1973. Their other four features (discounting Wolfshead: The Legend of Robin Hood, which was intended as a TV pilot) were adaptations of television shows: Holiday on the Buses, Man at the Top, That’s Your Funeral and notorious sitcom Love Thy Neighbour. However, this approach was a bit of a throwback for Hammer, as in the forties and fifties, they had made adaptations of popular radio series like Dick Barton, Life with the Lyons and PC 49. But things on this production did not get off to a good start. The original title was Dracula is Dead…and Well and Living in London, parodying the musical revue, Jacques Brel is Alive and Well and Living in Paris. Lee hated it, and went off, in a promotional interview that did not hold back:

I’m doing the next one under protest. I think it’s fatuous… I don’t see the point. I don’t see what they hope to achieve. I just hope [the audience] realise that I am struggling against insuperable odds on occasion to remain true to the author’s original character.

Wiser heads eventually prevailed, and a more serious approach – and title – prevailed, though Lee’s performance does feel more contractually obliged than committed. It’s largely a sequel to Dracula A.D. 1972, Cushing and Coles reprising their roles as Lorrimer Van Helsing and Inspector Murray. Oddly, Stephanie Beacham did not return as Van Helsing’s granddaughter, Jessica, the part going to Lumley instead. Rather than kids, this time it’s the rich and powerful who are drawn to the occult, resurrecting Dracula (Lee), who takes the identity of property tycoon D.D. Denham. He has an apocalyptic plan to unleash a weaponized plague bacilli on the world, because… Well, it’s never explained quite why he’d want to wipe out his entire food supply. Van Helsing theorizes the Count has had enough of immortality, and now yearns for closure. 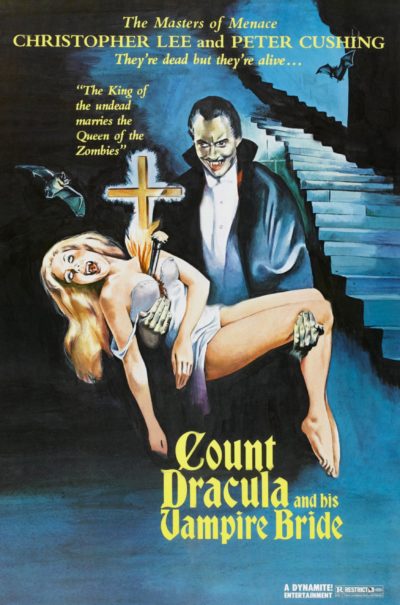 The first half is really good, a great adaptation of the vampire into a modern era. I’d even venture it’s Hammer’s best depiction of Satanism, nailing the concept of it being about power. It paints a picture of a network that goes to the top, with Insp. Murray’s investigation being hamstrung by higher-ups being part of the occult circle. This is certainly a more mature approach to the topic than A.D. 1972. In terms of building a contemporary world in which a vampire can operate, I can’t think of many scripts which do a better job than the one Don Houghton provides here. The supporting cast are top-notch (though surely they could have found a sacrificial victim with more than bee-sting breasts? She looks about 12). A stand-out is Freddie Jones as epidemiologist Julian Keeley, driven mad after being compelled by Dracula to work on enhancing the plague strain. His lunatic ramblings are thoroughly effective.

The film’s main problem are the various climaxes, which stagger from one problematic sequence to the next. These begin with Murray’s escape from a vampire-infested cellar. If ever I become an evil vampire overlord, I will make sure that the cellar where my spawn live, is not filled with pointy stake-like items. And given vampires’ aversion to running water, a sprinkler system probably counts as a Really Bad Idea too. I could have done without “Denham” affecting a cod Bela Lugosi accent when he meets Van Helsing: he’s not fooling anyone. Then there’s Dracula’s scheme to release his epidemic, which seems to end in multiple vials of plague being unaccounted for. Finally, the Count’s demise comes within seconds of being literal death by shrubbery, and requires another convenient stake-replacement close to hand for Van Helsing.

It’s certainly not the best send-off, in terms of being the final time Lee would don the cape for Hammer [he’d play Dracula one more time, in Dracula père et fils (Dracula and Son), a 1976 French comedy which, bizarrely, also starred future auteur director and enfant terrible Catherine Breillat]. For an iconic version of a classic character’s final moments, to be spent mostly entangled in a bush, is kinda sad. But the early going provides enough momentum and invention that the film is able to coast over the finish line, even as it reverts back to over-familiar tropes and clunky elements in the last lap. Contemporary audiences were, sadly, unimpressed – they were likely waiting for The Exorcist, which showed up on British shores a couple of months after this came out. Or maybe they were disappointed by the lack of songs from Stoneground. 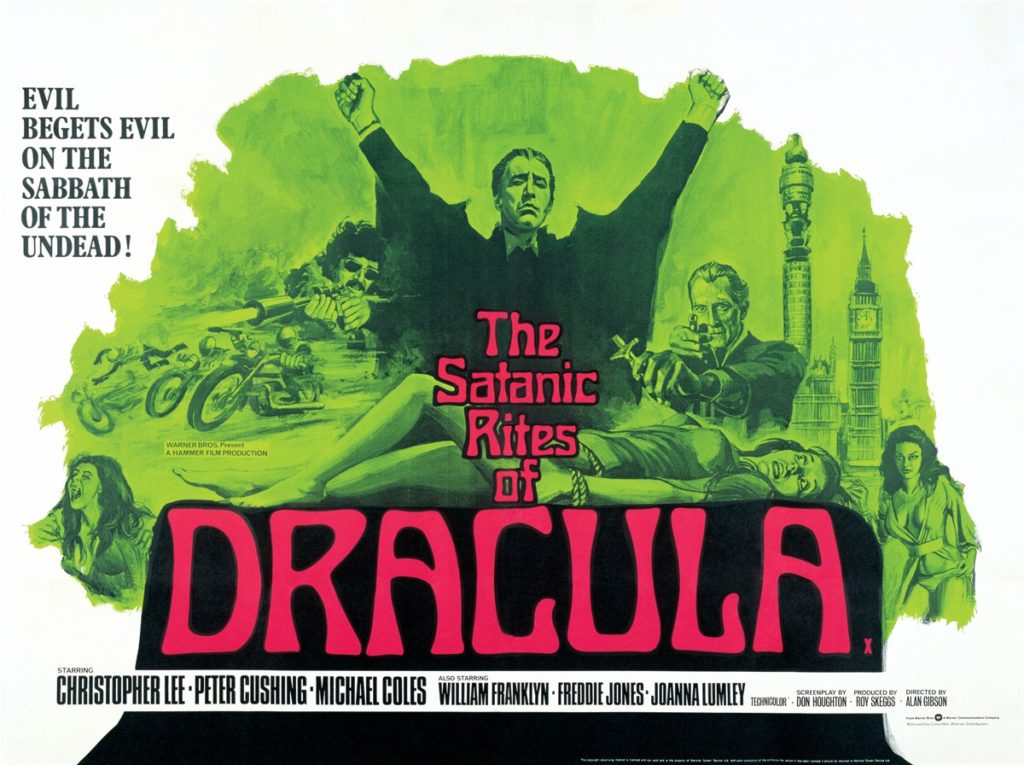 [Original review] Hammer’s attempts at updating the Dracula mythos reached their nadir with the previous Dracula AD 1972 – that they made another attempt was surprising, that it’s largely a success is frankly astonishing. It’s as much a thriller as a horror movie, with Coles as the cop brought in to investigate a satanic cult with high-level connections. Cushing is the occult authority, Lumley – with luridly red hair – his grand-daughter and Lee is…oh, come on, you don’t need me to tell you. Though it plays fast and loose with the vampire mythos (silver? hawthorns? fire sprinklers?), Cushing is fab as usual. At one point, he has to deliver a vast chunk of expository dialogue; in lesser hands, it could easily be leaden, but he brings it alive through sheer acting ability.

A good supporting cast, including William Franklin and Richard Vernon, lend weight and authority to help cover some of the flakier plot points, even if Christopher Lee’s role is less than you’d expect. Nice angle on how Dracula really wants everything to end, even if it means he’ll starve to death, and I always enjoy a nice conspiracy sidelight, even in a vampire movie. Shame about the ending; Hammer often seemed to have problems finishing their films, and this one is particularly unsatisfying. Except perhaps in a horticultural vein… B-