This well-made but ultimately rather uninteresting movie is the story of twins, Julia (Everley) and Mary (Biggers). They had a rather fraught childhood together, with Mary bullying her sister to the point of abuse. Years later, Julia still bears the mental scars resulting from her treatment – conveniently, her boyfriend Sam (MacRae) is a psychologist – but has become a teacher in a school for deaf children. Mary has, rightfully, been consigned to the loony-bin, and an attempted reconciliation, brokered by the girls’ uncle, Catholic priest Father James (Robertson) does not go well. Of course, Mary escapes from confinement a few days before her and Julia’s birthday. Those around Julia start dying gruesome deaths in the following days, apparently either killed directly by Mary or, oddly, by a large Rottweiler, apparently operating under her control. 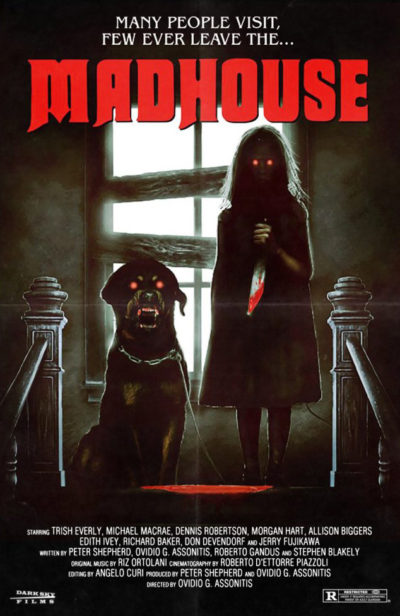 Things do not turn out to be quite as they appear, shall we say. However, it suffers from truly sluggish pacing. Much of the movie is occupied by the days leading up to Mary + Julia’s shared celebration, but precious little seems to happen. Assonitis attempts to create an atmosphere of looming suspense, with a number of false scares, that don’t work at all. It’s largely difficult to see why it was considered a ‘video nasty’ back in the day. There’s one point where it looks like one of Mary’s pupils is going to be savaged by the devil dog – only the movie then cuts to a shot of an ambulance, without showing the death at all. In restraint like this, it feels more like a competently executed TV movie, than anything likely to collapse British civilization as we know it. I’m going with the death by power-drill as its “crime”; we all know how that kind of action was seen by the DPP.

Indeed, this would appear to be the only thing that prevented this from vanishing into the memory hole of eighties film history. Assonitis, who fired James Cameron and took over Piranha II, knows how to frame a shot, and it’s perhaps slightly interesting that this is a rare slasher entirely about adults, rather than teenagers. Otherwise though, Everly’s performance is bland and uninteresting, and her character is borderline stupid. For example, despite what has been happening, she blithely writes off the disappearance of a friend who stayed over as an unannounced departure. Said friend has, in fact, spent an extended period of time wandering the house, before getting dog-attacked. Mary hears none of the resulting screaming and barking; I’ll have some of those sleeping pills, please.

Things do perk up somewhat after the hour point, where the twist is revealed. The character in question suddenly switches from underplayed to overacting, yelling nursery rhymes as they stalk their victim for the best part of ten minutes – before, again, a death which takes place behind a drape. It’s really too late to save proceedings, but more of this kind of unhinged lunacy from the film would have given it a better chance of making an impression. On the plus side, I did learn the sign language for “dead”. So, there’s that.