Who’d have pegged Spain as producing one of the best action movies of the year? Certainly, it lives up to the title, even I find myself mentally pencilling in an “E” at the beginning. It begins with betrayal. The scion of a Barcelona crime family, Lucero (Jaenada), had been sent on a trip to Japan to learn about loyalty, obedience and other relevant skills. Unfortunately, what he actually learned from the Yakuza was brutality and a zero-tolerance policy for perceived weakness. This causes him to stage a  takeover, killing his father and sending his sister, Maria (Duro) and top lieutenant, Max (García), scurrying for the shadows. Worse still, Max’s son is killed. Two years later, a chance encounter between Max and Leo (Casas), a young drug-dealer at the bottom of Lucero’s empire, sets the revenge-shaped dominoes in motion. 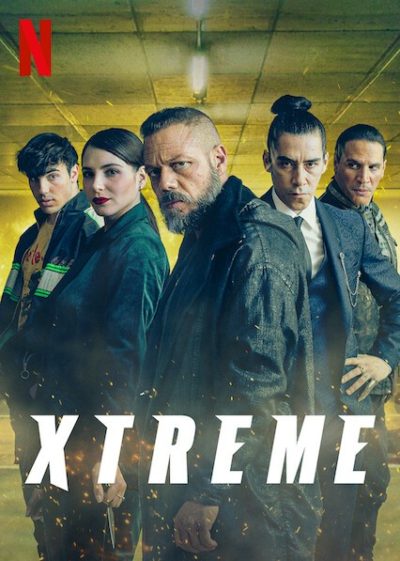 If you’re thinking this is Juan Wick, with a son in place of a puppy, you’re probably not far off it, down to the Russian gangsters who play a large role, as well as the grandstand nightclub scene, in which the hero chews his way through an endless stream of faceless, though impeccably well-dressed, goons. Still, you’re not here for original story-lines or complex plots (though I’ll confess the opening 10 minutes were a tad confusing, since you’re thrown in at the deep end). You are here for heads being cracked in imaginative and inventive ways, and there’s no shortage of that. While your mileage may vary, a personal highlight was Max going off in the garage where he lives, which begins with him using a nail gun (top), and works up from there to headrest-fu. I repeat: headrest-fu, people. It’s the best battle in a garage since the original Transporter. Oh, yeah. He also kills someone with a picture hook, the finest example of using what’s around you since Clive Owen weaponized a carrot in Shoot ‘Em Up.

I don’t know Garcia’s body of work in detail, but the IMDb lists just one other feature. Which may explain why the makers apparently let the others handle the dramatic content, though he does well enough with what is required. [Random note: Chris noticed that at one point, Lucero’s henchman says in Spanish that he’s Japanese – tying in with the Yakuza thing. But the Netflix subs have him saying he’s Korean, and the IMDb says he’s named Chul Moo, which isn’t exactly Japanese?] In its brisk, no-nonsense approach, it feels like a throwback to a simpler era. It’s surely no coincidence that at various times, Leo jokingly calls Max “Chuck Norris”, “Bruce Lee” and “Jackie Chan”, for those are clearly the inspirations at work here. Though the headrest-fu is probably more Sammo Hung… While hardly groundbreaking, this knows what it wants to do, and does it rather well. Get some popcorn, and a whisky rather than a soda – for hard liquor is considerably more appropriate here, than any soft drink.