Clemens was a legend of British TV, mostly for his work on The Avengers, on which he was the main writer. His company produced both The New Avengers and The Professionals, but he also wrote for everything from Bergerac to Highlander. The connection to Hammer began with Dr Jekyll & Sister Hyde, for which he wrote the script. Its success helped convince studio head Michael Carreras to give Clemens a shot at writing and directing his alternate version of vampire lore. This wasn’t exactly in Brian’s wheelhouse; horror was far from his regular fare. So it’s no surprise that, when he delivered this… well, let’s just say, unique genre mash-up, Hammer didn’t know what to do with it. It was effectively buried, dumped as the bottom half of a double-bill.

History has been rather kinder to Kronos, with the film acquiring a significant cult reputation over the decades. Quentin Tarantino likes it, and Peter Jackson reportedly remade it on Super 8 in his teenage years, playing Kronos himself. There was a graphic novel adaptation by Dan Arnett and Tom Mandrake, and when Hammer were resurrected a few years ago, reviving the franchise was one potential project. CEO Simon Oakes wanted Ben Wheatley to direct it, saying “I’ve told him Kronos is his whenever he wants it.” That was in 2013, so I am guessing Wheatley probably didn’t want it very much. 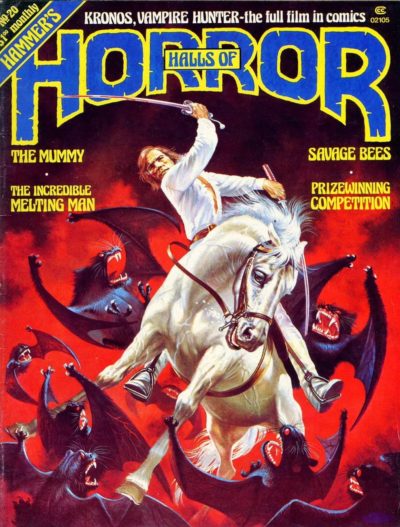 But there’s no denying the potential: Clemens created something which had scope for development. His original vision is hinted at by the lead character’s name. Kronos is Greek for “time”, and the plan was to have him fighting evil across the centuries and around the world, like a vampire hunting version of Doctor Who. Glimpses of this still exist. For example, as well as the typical, Napoleonic era sword (top), Kronos also carries a Japanese katana. Why, or where he got it from, are questions never even asked. Equally deliberate is its cinematic cultural appropriation, absorbing style from all over the place. The movie is as much spaghetti Western or swashbuckler as a “traditional” vampire film, of the kind made over the previous fifteen years by Hammer.

There’s no doubt, if you’re familiar with his work, this feels very much like a Brian Clemens production. Clemens brought over a slew of people from The Avengers, both in front of and behind the camera. Cater had appeared on the show, as had other cast members Ian Hendry (who had been the lead in the first series), John Carson, John Hollis, Julian Holloway, and Wanda Ventham. Perhaps most notably, the score here is composed by Laurie Johnson. He wrote the classic theme for the series, and his style is instantly recognizable. As noted below, the structure of the three heroes also seems to foreshadow The New Avengers, which would begin a couple of years later.

Across that trio, the problem is likely Janson, who is perhaps the closest Hammer came to a male equivalent of the foreign starlets they brought in, such as Yutte Stensgaard – appearance being more important than ability to carry a film, or even act in English. For like many of them, he ended up having his performance dubbed (Julian Holloway provided the voice). Though unlike his more bosomy predecessors, he did stick around in the acting business, albeit more or less going back to his native Germany thereafter. According to the IMDB, Janson was working there as recently as 2018, well into his eighties. He still perhaps represents the only case where Hammer’s traditional middle European setting was anchored by an actual middle European actor. 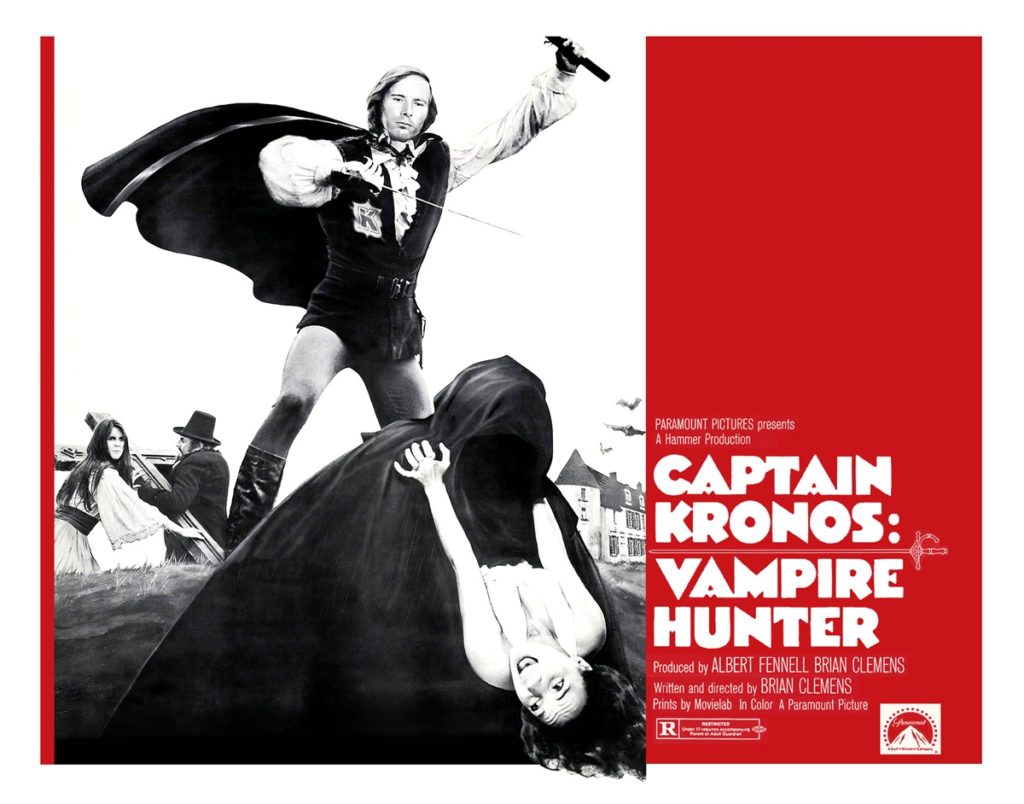 While this is by no means terrible, Clemens’s background on the small screen does seem to infect the entire project, which too often feels like a TV movie – albeit a reasonably well-made one, with more thought than most. I can see how it could have become an ongoing series, with some tweaking (and, probably a different leading man). It is at least a respectable attempt to bring a different approach to the genre, while still retaining the original period atmosphere. I think it does throw too much of the regular mythology out (no stakes, no crosses, and replacing the draining of blood with life-force), and that may be partly why Hammer execs turned their noises up at it. There’s different, and then there’s too different. A film which ends in an extended, if well-staged, sword-fight between vampire and vampire hunter, may well fall into the latter category.

[Original review] The titular hero (Janson) is a wandering ex-soldier, who hunts vampires ‘cos they took his family, and slays them with the help of a hunchback professor (Cater) and a conveniently-passing babe (Munro). An old army buddy calls him in, as the village girls are having their life drained away. It’s probably giving nothing away to mention the suspiciously-youthful local nobility. Clemens’ sole feature, he’s best known for his TV work, and there are distinct echoes here of the Clemens-produced New Avengers, with a trio of a wily veteran, a macho action guy and a sex-symbol, though Munro never does much beyond act as eye-candy and bait.

For a late Hammer, this is remarkably restrained, particularly sexually; it’s painfully clear they were angling for a franchise, on TV or film. It also rewrites much accepted vampire lore: crosses have little effect, nor does daylight. Indeed, the best scene has our heroes trying various methods, in order to find out how to kill this particular species. There are a couple of other very cool elements – flowers wilt when the vampire passes, and time “stops” during an attack – though they mean nothing. Everyone plays it gratifyingly straight: Cater is a decent substitute for Peter Cushing in the expositional role, and check out Ian Hendry’s cameo as a lecherous thug. But if anyone can explain the blind girl sitting in the background, I’d be very interested to hear from them. B-