This is a real genre hot-pot. Part SF, part action, part social satire, yet it qualifies on the back of the director’s description of it as “a high-camp splatter movie…with political undertones.” Certainly, contemporary reviews which called it a “vomitous offering… unfit for human consumption” or “a catalogue of sickening horrors” played no small part in my watching it. But as the old joke goes, I wouldn’t have said it was that good, with energy generally operating ahead of its talents. A troubled shoot, slashed from 44 to 28 days probably didn’t help, and neither did a lead actress apparently terrified of the Australian outback. Watch out for those drop bears, ‘Liv. 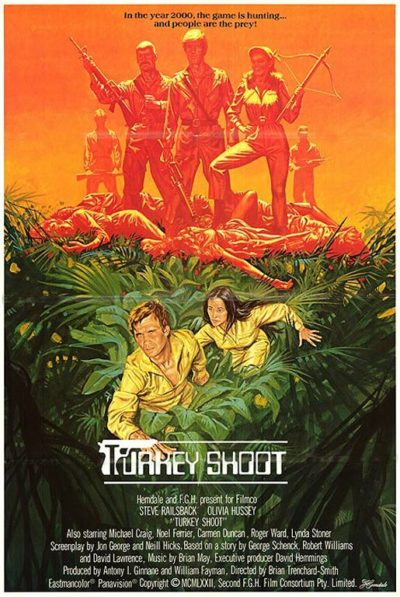 It takes place in a totalitarian future – you can tell, because signs are all in that futuristic computer font. Here, dissent is not tolerated, and those who try find themselves sent to re-education camps to learn the error of their ways. Among them are Paul Anders (Railsback) and an innocent woman, Chris Walters (Hussey), unfairly accused of assisting him. Life is hell in the camp, but Anders continues to stand up against the authorities, reasoning they don’t want to kill him, they want to break him. It’s about to get a lot worse, with the pair part of a group freed into the bush, as human prey for a government minister and his guests.

To be honest, compared to Paul and Chris, they’re perhaps better characters. One comes with a circus freak sidekick (played by pro wrestler Steve Rackman), or Jennifer (Duncan, top), another is a posh bird on horseback, who wields a crossbow with a variety of deadly bolts. The lefty political satire is unsubtle. Oh, look – the head of the re-education camp is called “Thatcher”. [Indeed, in the UK, it was released as Blood Camp Thatcher] Pause to consider it’s the left who historically favour that kind of thing: this was released only three years after the overthrow of Pol Pot. Hell, even now, Virtual Re-Education Camp Seth Rogen awaits those who anger the woke mob on social media, and fail to appease them. But why let facts interfere with your schlock?

It does feel like two completely different movies joined at the hip. The first is the flaccid Orwellian satire, with gratuitous mixed showers. The second is a bit more fun, thanks to occasionally enthusiastic gore (bonus points for enthusiastic use of a front-loader), but is still nothing more than a knock-off of The Most Dangerous Game. Railsback’s lack of charisma isn’t helped by the scripting. While it deserves credit for not hanging around, this does leave us with no connection to the hero and heroine, and so little sympathy for their troubles. There is one twist I did not see coming, though it renders the obligatory finale, where the prisoners rise up against their captors a tad questionable: where, exactly, are they going to go? Otherwise, too often, this puts the Z in Ozploitation.