Firstly, I find myself unnaturally bothered by the punctuation of the title. Despite what it implies, Major Grom is not a plague doctor. Indeed, they are the protagonist and antagonist respectively. Might I suggest that Major Grom vs. Plague Doctor would be a less confusing title? As irritating twats on Reddit like to say, thank you for coming to my TED talk. 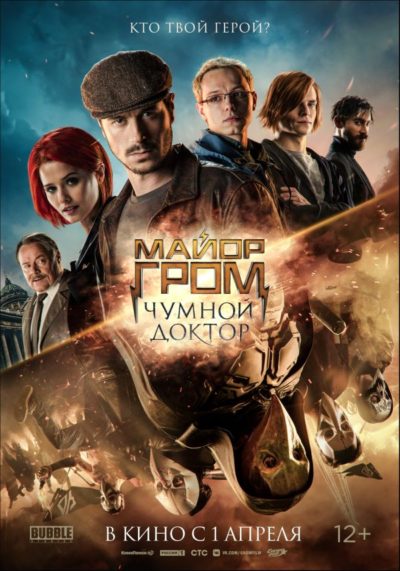 Anyway, this lushly-shot Russian film takes place in St. Petersburg, or whatever the city is called this week. Igor Grom (Zhiznevskiy) is one of those loose cannon policemen, who catches the criminals, but has a tendency to destroy city blocks in the process. Meanwhile the bubonic specialist of the title is engaging in vigilante justice, brutally slaying the rich and powerful who have eluded justice for their crimes. The doctor seems to be connected to a social media network run by the geek Sergey Razumovskiy (Goroshko). But how, exactly? With the help of a new partner (Seteykin) and an Internet journalist (Aksyonova), Grom will bang heads together until he finds out.

While there’s nothing particularly new about the “rogue cop” plot, the unusual setting helps elevate this above the pedestrian. There is a distinctly local flavour; on occasion, perhaps a little over-seasoned. The rhythm sometimes contains pauses for audience reaction at point where none seems required to a Western viewer. However, particularly in the first hour, it moves on quickly enough and this keeps the audience engaged. Zhiznevskiy looks like a Russian version of Brad Pitt, his beloved flat-cap firmly affixed to his head. Quirks like him eating aerosol cream straight from the can, in his startlingly messy apartment, help humanize the character. Grom also has a nice trick of visualizing the future, to help him avoid the consequences of his action. If the supporting cast are more sketched out than fully-drawn. they help flesh out the world in which he lives.

It does have some pointed comments on the role of social media, with the online mob of keyboard warriors turning into an actual, physical mob as the Doctor riles up followers of his vigilante justice. For some reason though, the pace does drop off considerably. At 136 minutes, it feels a good half-hour too long, with not enough happening to sustain a narrative of that length. There is a twist involving the identity of the Plague Doctor, which is nicely executed, but that’s about it in the second half.

Still, there are a lot of Very Large shots here; Trofim seems a fan of sitting his camera a long way back, and that provides a lovely sense of scope. According to Wikipedia, the budget was less than $9 million, which makes it all the more impressive. It feels as epic in scale as movies costing ten times as much out of Hollywood, so even when the plot flags, the visual sense does help retain your interest. I also hope you noticed me getting through the whole review without a single “Ground Control to Major Grom” joke. You’re welcome.