Considering the vast majority of this takes place inside a lift (albeit an industrial-sized one), this does a decent job of building a world. It seems (and you’ll find a lot of that vague language here) to take place in a giant underground city, where the elevators transport the population between the levels, numbering roughly two hundred. It appears to be a totalitarian kind of state, where cigarettes are prohibited – score one for totalitarianism! – and possesses a weirdly steam-punky kind of technology. Travelling on this particular lift is Luchino Fujisaki (Fujisaki – yes, the character and actress share a name, for reasons I’m sure were clear to the makers). However, the lift is diverted to a prison level to take on board two psychotic prisoners, who manage to overpower the captors and hold the other inhabitants captive. 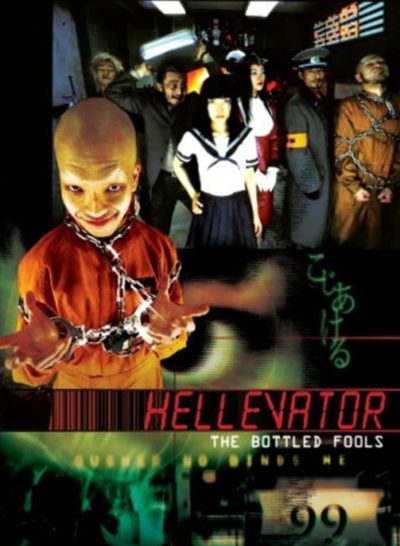 In some films, that would be it, and indeed, the resulting siege would probably have been enough for a small-scale, claustrophobic feature: the original title in Japan translates as “The Bottled Fools,” which is quite appropriate. Writer/director Yamaguchi, however, is intent on swinging for the fences and that’s just the jumping off point for a story subsequently involving terrorists, telepathy and general government malfeasance. It’s certainly not lacking in ambition, especially for something which, unfortunately, all too often looks like it was shot on a flip-phone of the time. It’s also structured weirdly, unfolding in flashback as the result of an investigation into an explosion which killed over a hundred people, caused by one of those illegal cigarettes.

As a result, it’s about 25 minutes before the prisoners show up, and to that point, you get an awful lot of simply going up (or down) in an elevator. Sure, we are introduced in this time to some odd characters, a few of whom will eventually prove relevant to the plot. Others… not so much. But at 107 minutes, this definitely feels like it needed better pacing, with any number of scenes that will have you making “hurry up” gestures with your hand. This is not a film which feels the need to offer explanations, either, and the second half is largely devoted to a thread which comes out of nowhere, and doesn’t lead to much resolution either. The ending certainly poses more questions than it answers.

It does have some nice production design, especially considering the obviously limited resources. You do forget you are basically stuck in a lift for an hour and a half, which would generally tax the patience of the most tolerant, and there are hints about a wider universe, existing outside the confines of the elevator. However, if I never see another shot of a scrolling floor display again, it’ll be too soon, while the impenetrable nature of the environment also extends to most of the characters and their actions. Despite moments of energetic gore, this feels like the kind of Japanese film which might benefit from a remake: a strong concept is not done sufficient justice by the execution.