I am irrationally annoyed by a title which doesn’t seem to make sense. Surely, it should be “For the Sake of ViciousNESS”? Or “For the Sake of THE Vicious”? That’d work too. But it’s likely never a good sign to find yourself contemplating the grammar of a movie’s title, while things are already under way. Anyway, nurse Romina (Burke) comes home on Halloween Night to find a man unconscious on the floor of her house. It’s her landlord, Alan (Paradine), who has been ambushed by Chris (Smyth), to whom Romina also has a connection. She treated Chris’s daughter after she had been abducted and raped years earlier. Chris believes Alan is responsible, but with the evidence insufficient, has been forced to turn vigilante. 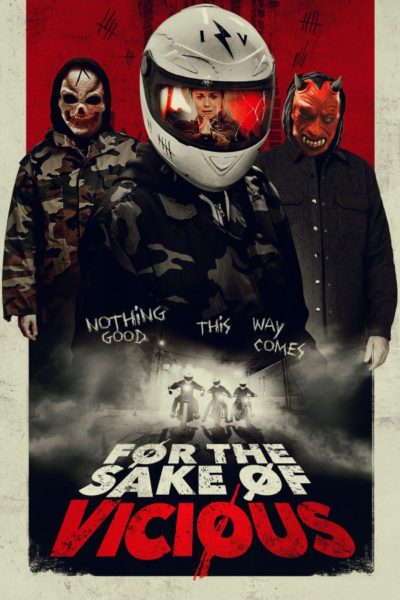 However, Alan isn’t just the rental property owner he seems. He has some very nasty allies, who soon launch an assault on the house, clad in Halloween masks of their own. Romina finds herself forced to team up with Chris, who has already shown a willingness for violence of the most gnarly kind. Things are going to get very, very messy for the pair going forward. By that, I mean, imagine The Evil Dead as a home invasion movie, probably peaking with the sequence in which a claw-hammer is stuck where no claw-hammer was ever intended to go. This barely even slows down the target; the amount of damage everyone takes here is spectacular. Or insane. That works too.

My problem was mostly with the plotting. Romina is remarkably chill when she finds out what’s going on, and is in full-on accomplice mode after what feels like barely a few seconds. It’s a transition that is, of course, absolutely essential for what is to come, yet it still seems forced. There are any number of similar holes, such as Alan not bothering to escape when he has a perfect opportunity, and the complete lack of attention paid by anyone to the extremely noisy mayhem. The “It’s Halloween” excuse can only go so far, and this stretches it perilously thin.

The heroine probably needs more filling out in terms of her character. We don’t get to know much, beyond her having a son, whom someone is fortunately baby-sitting that night. There’s a call to him, while she’s busy patching up Alan. It’s kinda cool, and I was expecting it to show some relevance. It never did. Perhaps the film got distracted by its near-constant parade of mayhem in the second half. I can’t argue too much, since those elements are good fun. There’s inventive use of everyday household items, such as the lid of a toilet cistern, while the gore is liberal and equally enthusiastic. However, it seems largely empty; I never felt the emotional impact you’d expect from such graphic violence. That’s where it parts company from things like The Evil Dead, and why this will quickly be forgotten. Save, perhaps, for the clunkiness of the title.