This is certainly a twisted piece of work. While I can’t say it all works – some of it appears to exist entirely for shock value – you have to admire the willingness to go the extra mile. The focus is Lorian West (Cofran), abducted from a supermarket parking lot to become the latest victim of Heinrich (Pirae), a trafficker in women who specializes in transforming them into “Sofias”: extremely pliable sex dolls. As he tells Lorian, “You won’t even remember your own face when this is all over.” He is assisted in his work by wife Misha (Solinger), who explains, chillingly: “Being curious won’t help you. Being obedient will,” a line which appears on the poster. Also in the house is his even stranger, somewhat rebellious sister, Charlotte (Alig), and with the local sheriff in cahoots, there’s no outside help coming for Lorian. If she’s going to survive and make it out the other side, it’s going to be on her own. 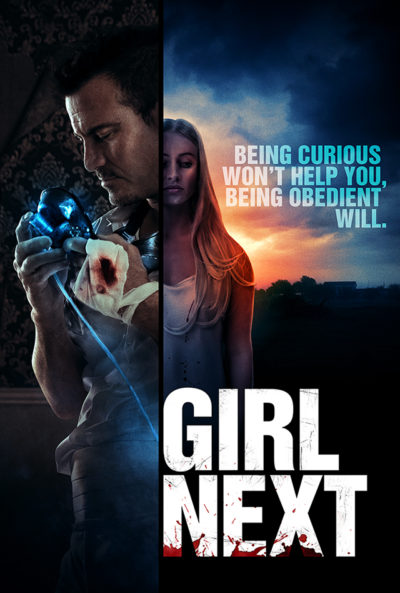 The weakest section here is probably the middle, which depicts the actual mind-control process, and isn’t very convincing. With a few seconds of beginning to watch what appears to be a second year film student’s editing project, Lorian is screaming her lungs out. Hey, everyone’s a critic. Things get pretty trippy from this point on, but the experience of a mind being systematically destroyed, in order to be rebuilt, is not as well-handled here as in Sleepless Beauty. That kept at least the ball of one foot on the ground, while this climbs into the cinematic blender, pulls the lid closed, and flicks the switch to “HIGH”. Those who have a higher tolerance for the more surreal end of cinema may appreciate it more than I did. I will confess to sliding off and checking the snack situation in the cupboard, for example.

Though the film lost me there, more or less completely until recovering somewhat later, I did like the performances, which are all appropriate to the overall tone. Pirae and Solinger make for a truly bizarre partnership. It’s a classic toxic relationship, matters not helped by Heinrich’s growing obsession with Lorian. The supremely twisted nature of their relationship doesn’t become clear until near the end, in a scene which… well, certainly made me forget the snacks I’d previously retrieved, shall we say. But I think Alig gives the best performance; you never quite know where Charlotte is coming from. At times she seems almost mentally deficient, yet at other points she’s quite the sharpest tool in the box. Still thoroughly twisted – as in taunting Misha, “Why does Daddy like fucking me more than he likes fucking you?” – but she grounds the film in a way the heroine doesn’t.

On balance, this is probably a film which I look back on more fondly than it seemed at the time. It may be considerably less than the sum of its parts – yet some of its parts are certainly memorable.