This may be the most obscurist Hammer film I’ve reviewed in the series. I’d seen almost all of the others beforehand, but I’m not 100% certain I have even heard of this, and certainly didn’t know Cushing was in it. But to call this a troubled creation would be putting it mildly. “Cursed” might be closer to the truth. Initially slated to be made in 1972 as a co-production between Hammer and a Canadian company, the Canucks went bankrupt, stalling things for several years. The script was written by Don Houghton who, as we discussed in our Legend of the 7 Golden Vampires piece, had a connection to Shaw Brothers. So this eventually became the second co-production between them and Hammer. However, it went through three directors of photography, two directors and was also delayed significantly by the ill-health of its star Whitman.

Quite how the director of Two-Lane Blacktop ended up in Hong Kong, shooting a film for Hammer, is difficult to determine. However, his time working for them proved brief. Hellman was fired less than two weeks in, producer Michael Carreras taking over. The reasons for him being canned, similarly, depend on who you ask. Falling behind schedule – a capital offense in Hammer’s book – and studio dissatisfaction with the rushes appear the most likely candidates. Though in subsequent comments, Hellman claimed to have shot about 80% of what ends up on screen. Whitman was a similarly odd choice: his casting feels like a throwback to early Hammer films, when the studio would shoehorn in a US “name” for box-office purposes. While he had been Oscar nominated for 1961’s The Mark, his career at this point was better summarized by his role in killer rabbit film, Night of the Lepus. 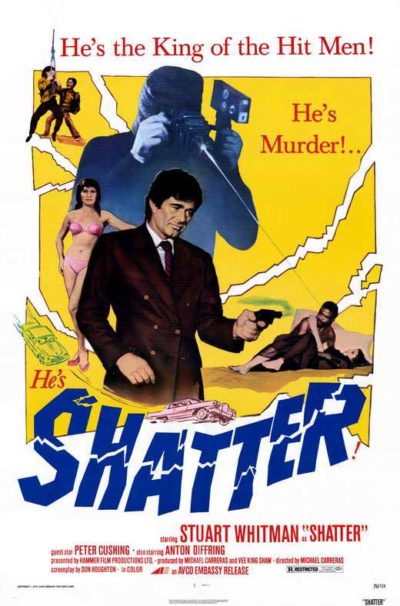 He plays international assassin Shatter, fresh off a job killing the leader of an African state. But when he goes to collect his fee from Hans Leber (Anton Diffring, returning to Hammer 15 years after The Man Who Could Cheat Death), he gets the cold shoulder. He’s also sternly warned by British security agent Paul Rattwood (Cushing) to leave Hong Kong immediately, for the good of his health. Good advice, for it does appear someone is looking to follow the first rule of assassination, as laid down in Star Trek VI: kill the assassin. Fortunately, at the scene of the hit, Shatter picked up a folder of compromising evidence, which gives him leverage as he seeks to get his fee out of Leber, and preserve his life. He hooks up with local massageTotty Mai-Mee (Li), and hires her brother Tai Pah (Ti, best known for his role in John Woo’s A Better Tomorrow and its sequel) as muscle.

Turns out – and please pay attention, because this will be on the end of term test – an international criminal syndicate hired Shatter, not any government intelligence group. As Rattwood puts it, if those agencies really wanted M’Goya dead, “They would have staged a simple accident.”  Instead, the mobsters found their puppet showing signs of cutting the strings: they plan to install the target’s brother in his place, while framing the West for the assassination. Rattwood explains all this to Shatter, providing exposition in the marvellous way only Cushing can deliver, and explaining the folder contains the location of drug processing laboratories. Though I did snort derisively when he says they “turn the raw opium into high-grade cocaine.” Er… I am not a drug lord, nor do I play one on TV, but I am fairly certain that isn’t the way things work.

One of Carreras’s complaints about Hellman was apparently that he made Hong Kong look “like a slum.” I can’t really argue there: much of the film seems to take place in back alleys, massage parlours or other dens of iniquity. Yet, I can’t say that’s inappropriate, for a film set in the murky underworld of spies and killers. The problem is much more a leading man who is thoroughly  and completely lacking in lustre, Whitman drains the life out of every scene in which he appears. Even most of Ti’s martial arts action is unimpressive. There’s a fight in a restaurant which is so sluggishly staged, it feels like I could have kept up. Though it is amusing to realize that, in this version of Hong Kong, “dinner and a show” appears to involve a full-contact international martial arts tournament breaking out before dessert.  Occasionally gory moments don’t make up for the overall sense of lethargy. 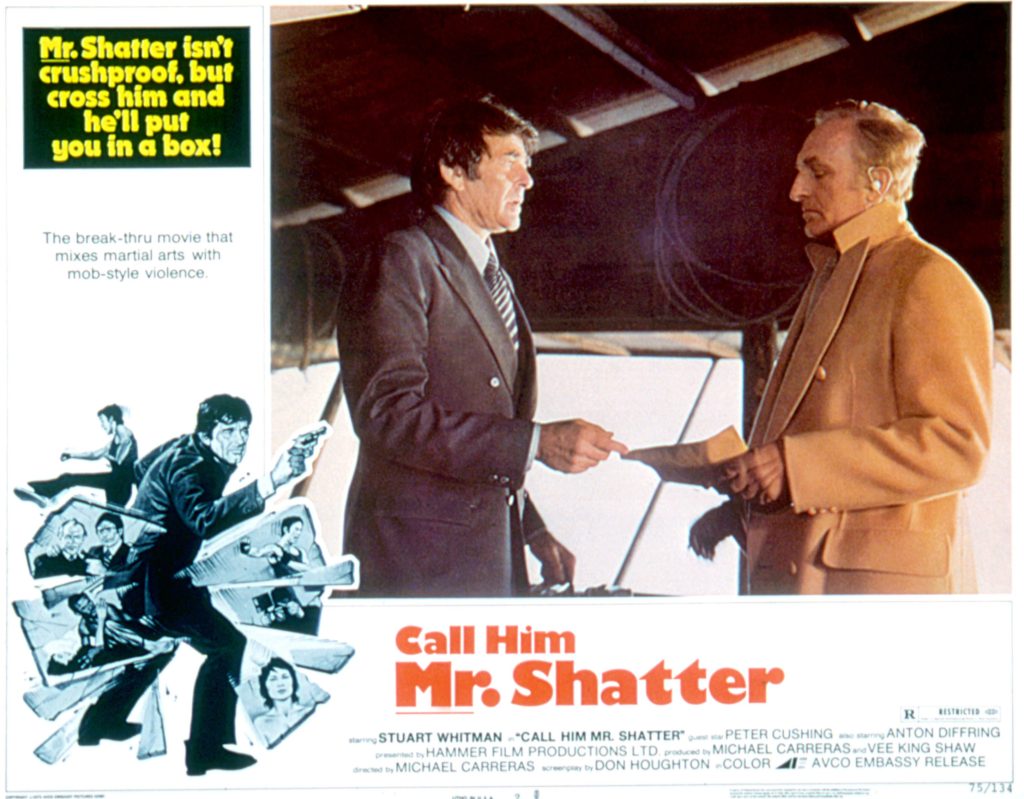 I did like both Cushing and Diffring, who make the most of their supporting roles, and the script is actually decent too. There’s a good world here, in which the lines between good guys and bad guys are considerably blurred, with actions and justifications largely painted in shades of grey. There were, at one point, plans for this to become a TV series. I’d have watched it, if it had focused on the veterans, and adopted a John Le Carre style of international intrigue. Could probably have coped without the martial arts, which outside of Atomic Blonde, doesn’t mesh too well with spycraft. Guns tend to be more effective even when, as here, they are pointlessly combined by Shatter with a camera. Please make up your own joke about head shots.

Any hopes of a spin-off though were obviously scuppered by the problematic production. While the movie did get an American release, as Call Him Mr. Shatter, it was all but completely buried in Britain, and didn’t come out in the UK until September 1977, forty-five months after shooting had wrapped. Carreras called it “a bad picture, no question about it. We ran into all sorts of problems, and like all pictures that are bad, I think it was badly conceived from the start.” It’s hard to argue with the credited director, although the saddest thing for me was realizing this would be Cushing’s final appearance for the studio with which he will forever be linked.