“Violence solves nothing,” says single father Richard (Adkins) earnestly, to his teenage son Taylor (Garbacz), after the latter gets into a fight at his Mexican school. I laughed like a fucking drain at this, because both Adkins and Florentine have made their entire careers out of movies where violence isn’t just a solution, it’s the only solution. This doesn’t break any new ground there. Violence begins solving things just after the 19-minute mark, and pretty much doesn’t stop thereafter. Though at the end, Richard pauses the carnage, in order to teach Taylor a valuable life-lesson. I’m sure we can all agree, that’s what is important her… Goddammit, I almost managed to type that all out with a straight face. 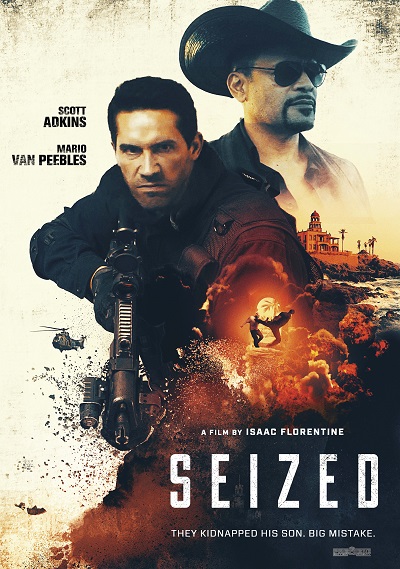 In between times, drug cartel boss Mzano (Van Peebles) kidnaps Taylor in order to coerce Richard to do his will. For Dad was a British special agent, codename “Nero”, in his previous life, and Mzano wants to use those very particular set of skills, to wipe out all his cartel rivals. You will likely be unsurprised to hear, that once Nero takes care of Mzano’s business, he’s coming right after the boss, in order to retrieve Taylor. Complicating matters, at least slightly, is the presence of Nero’s old boss at Mzano’s side. His permanently nervous expression can be explained by being thoroughly aware of just how good his ex-employee is at… solving problems with violence, shall we say.

This is extremely straightforward and thoroughly linear. Richard has to make his way through three levels of cartel hoods, then take on the Boss Level. The only slight wrinkle is the camera attached to him, so Mzano and his henchmen can watch and cheer him on. Must say, after seeing “…and Mario Van Peebles” in the credits, I was expecting little more than a cameo. But he’s genuinely second-billed and seems to be having fun with it. Less impressive, and this was equally much a surprise, was the largely underwhelming action. Adkins and Florentine have turned out some top-notch stuff before, but thus feels like opportunities were wasted. I mean, what’s the point of having your hero fight his way up multiple floors of a strip-club, if nobody gets hurled off the balcony, to plummet down? Well, save for the MexiTitties.

The only scene which shows anything much in the way of consistent invention sees Richard fighting multip;e minions, with his hands literally tied behind his back (top). There’s also a scene where he knocks one opponent out by breaking a plate on his head, then uses the shard he’s left holding to cut another’s throat. However, it feels as if the rest of the action world might have caught up significantly, since the Fiorentine/Adkins partnership was in its prime. In a post-John Wick 3/The Night Comes For Us world, this feels just short of adequate.