On the one hand, this is another case of “kiltwashing”; you don’t get much more American than Captain Kirk (v2.0) himself. But the film gets credit for most other areas in this regard. Director McKenzie is Scottish, and still lives there after a brief flirtation with Hollywood. It was also filmed in Scottish locations; though as is sadly normal, Scotland appears to stop at Aviemore. There has been some shade thrown at this for playing fast and loose with historical authenticity. In particular, the Battle of Loudon Hill which forms the film’s climax, is radically different from the way it unfolded in reality. Bruce was also already married to Elizabeth (Pugh) well before he began his rebellion against the English king, Edward I (Dillane). It still does considerably better than Braveheart in this area. Then again, Highlander is probably more historically accurate than Braveheart. Not, to be honest, that I care. This is not a documentary. 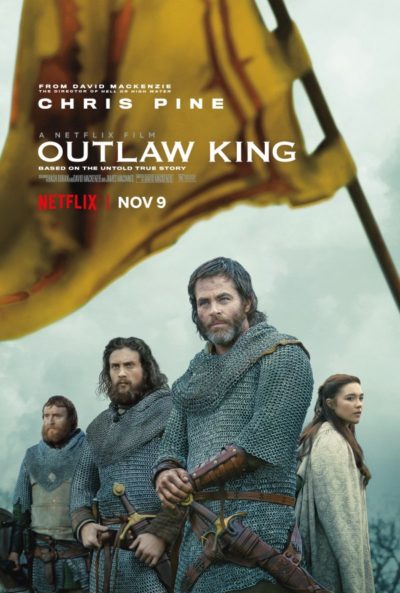 Anyway, it begins with Edward I having suppressed a Scottish revolt, and forcing their nobles to bend the knee. There’s an amazing, unbroken 9-minute opening shot which includes this, a swordfight between Bruce and the king’s son (Howle), and the enthusiastic application of an F-sized catapult against Stirling Castle. Sadly, it’s largely downhill from there, perhaps due to five writers including Mackenzie. The film seems to be pulling in an equal number of different directions, and only sporadically comes to life – usually when people are trying to kill each other. It follows Bruce as he plans a second rebellion after the death of William Wallace (whose limb makes a cameo). Robert gets his arse handed to him and retreats to the Western Isles to regroup. He and his allies return to wage guerilla battle against the English, leading up to the Loudon Hill battle. It ends in a lengthy set of captions covering the next 300 years.

Sadly, the Bit With the Spider, which every schoolboy learned about Bruce, appears to have been left on the cutting-room floor. So much for your so-called “historical accuracy,” eh? It also never manages to engage the emotions with any consistency. Pine has a decent accent, but in terms of performance, resembles his arboreal namesake. But as with The Bruce, it feels as if liberating Scotland was more a job Bruce was given; even his rabble-rousing pre-battle speech is utterly forgettable. Any life here is typically found around the edges in some decent supporting performances. Pugh shows sparky courage in standing up to her English colleagues, and Aaron Taylor-Douglas (yes, Kick-Ass himself) is a lot of fun as the contractually obliged lunatic Celt warrior.

The 121-minute edit delivered to Netflix manages to feel both short and too long simultaneously, which is an interesting feat. There’s a sense of the surface just being scratched, in the nods to political and clan intrigue. Yet there are also any number of scenes which felt superfluous and/or over-long. Not among those, however, is the final battle. Those fond of horses should avert their eyes, CGI or not.