I’ll confess to being rather confused by the opening scene, which has Scottish knights in front of… the Pyramids? Turns out, it’s a flash forward to later times, and Bruce’s dying wish to have his heart taken to the Holy Land. Guess the knights in question overshot and landed in Egypt, not Israel. Close enough.  It continues on shaky historical territory, fabricating entirely a battle between Scottish and English forces, which provides cause for Robert (Welch) to kill English supporter and rival for the throne, Comyn (Douglas). From there, however, it settles down to a reasonably accurate if compressed recounting – if you discount the inevitable Highland bagpipes showing up too early. However, you’re then forced to look at the rest of the production, and it’s not good. In most ways, it resembles something made for schools’ television: making up in earnestness, what it lacks in resources. 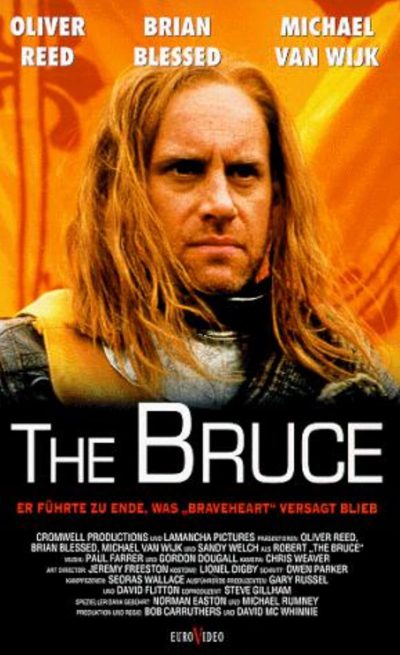 It may have been a mistake to bring on board Blessed, as King Edward I, and Reed, playing head of the Scottish church, Bishop Wisharton. Their performances are probably too good, since the gap between them and most of the rest of the cast is yawning chasm-sized. [Random note: Edward’s wife, Queen Eleanor, is played by Blessed’s actual wife Hildegard Neil. Perhaps there was a 2-for-1 deal?] Elsewhere though, I was amused to see Dee Hepburn, a.k.a. Gregory’s Girl, as Bruce’s sister, and Michael Van Wijk a.k.a. Wolf from Gladiators, playing English thug Henry De Bohun. When a film is depicting a figure like this, who rallied and united a nation, you need an actor with charisma, so the audience will want to follow him too. Welch doesn’t have it, and the movie founders in consequence.

According to the IMDb, the film was partly financed by supporting actors paying a thousand pounds, in exchange for their roles. This would probably explain the copious close-up shots of irrelevant extras, especially during the Battle of Bannockburn which forms the movie’s climax. It does seem to possess a reasonable amount of scale, the frame being filled with participants. However, the directors generally keep the camera pushed in so close, there’s no real scope. There could be twenty on each side, or two thousand, you can’t tell. It’s also over with remarkable speed. The actual event unfolding over a two-day period, rather than the 15 minutes of not very convincing shoving we get here. Then again, nor would you know eight years had elapsed, between the death of Comyn and Bannockburn.

Perhaps what’s lacking here, more than anything, is a real sense of passion. Edward I is the only person in this who seems to give a damn about the future of Scotland. Think what you like about Braveheart, and its (lack of) historical accuracy, you have to say that Mel Gibson’s William Wallace, very clearly cared. The cut-rate Connor MacLeod we get here, is so lacking in enthusiasm for Scottish independence, he might as well be Robert the Bruce, chartered accountant.