At points in the early going, this felt as if it could be the most borderline of the Hammer movies I’d reviewed so far. There are no fantastic or supernatural elements here. Initially, it seems like a kitchen-sink drama with unwed mother to be, and aspiring writer of fairy tales, Brenda Thompson (Tushingham) moving from Liverpool to London, to find a father for her child. But after the usual clichés of her struggling to fit in, find a job and a place to live, etc. things gradually take a darker tone. This is mostly due to Peter (Briant), the man into whose life she moves. He is attractive, personable… and, it increasingly becomes clear, a complete psychopath.

Though despite her naive innocence, Brenda has issues as well. She dognaps Peter’s pet in order to fabricate an excuse to meet him, and it turns out, was also lying to her mother about being pregnant. But these foibles are small potatoes compared to “Peter” – a fiction apparently inspired by Peter Pan. He names his dog Tinker and insists on calling Brenda “Wendy”; this fantasy provides the film’s title. It’s hinted strongly he has killed, perhaps multiple women, before meeting Brenda, as well as poor Tinker. All, apparently for being “too beautiful”, a curse which has followed him through his life, and condemned him to being used and discarded.

The specific nature of his psychosis makes the relatively plain Brenda safe – at least for now. The same cannot be said for Brenda’s flat-mate,  Caroline (Wyeth), who becomes Peter’s latest bed-mate, then victim. Meanwhile, Brenda’s mother has come down from Liverpool in search of her daughter. And Brenda undergoes a makeover, in order to look attractive for Peter – of course, not realizing his “tendencies” in this area. When Peter eventually opens up, revealing his true self to Brenda, the results are not what he hoped for. In the end, this feels like a twisted fairy tale, where the Princess goes in search of her Prince Charming, only to find he was really the monster all along.

There are some other recognizable names in the cast. James Bolam of Likely Lads fame is the first man on whom Brenda sets her sights. Jazz singer Annie Ross, who plays one of Peter’s mother replacement figures, would dub Britt Ekland in The Wicker Man. And veteran character actor Paul Brooke, whom I know best as P.C. Erny in Lair of the White Worm, made his feature debut in an uncredited “Man at bus-stop” role. I was amused by the movie playing a bit fast and loose with London geography. Early on, Brenda is at a party in Earl’s Court, but when she bails, is suddenly encountering Peter and his dog in the highly recognizable, brutalist architecture of the South Bank. Which Google Maps tells me is actually 90 minutes walk from Earl’s Court.

It is quite roughly edited in the early stages, and feels very disjointed. The approach Collinson takes involves lots of cuts between non-adjacent, or even related, scenes. This may be a way to depict the disorienting effect of Brenda arriving in the big city, but it’s a spiky and aggressive way to put that over, and quite off-putting to the viewer. Collinson was a “one and done” director for Hammer, best known for The Italian Job, but also did classic kitchen-sinker, Up the Junction, which is likely slightly more relevant here. It does eventually settle down into a more watchable rhythm, once Barbara turns up on Peter’s door-step. The scenes with them interacting, are generally good to very good, and really rescue the film after that unpromising start.

The script was commissioned by Hammer from playwright John Peacock, specifically with Tushingham in mind. She almost had an entire career of playing “Northern lasses who move to London.” Her character apparently lives in a fantasy world of her own construction: she initially tells Peter her name is Rosalba, the protagonist of the fairy-tale she’s writing. When she tells him she’s having their child, I strongly suspect this is just as much a fabrication, aimed at locking him down. As mentioned, she lied about this before, and we know the goal of her trip to London was to catch a man. While her callous indifference to others may take a less violent turn than Peter, it seems no less deeply ingrained. Some synopses call Brenda, “A timid, withdrawn woman,” but that seems considerably less than the whole picture. 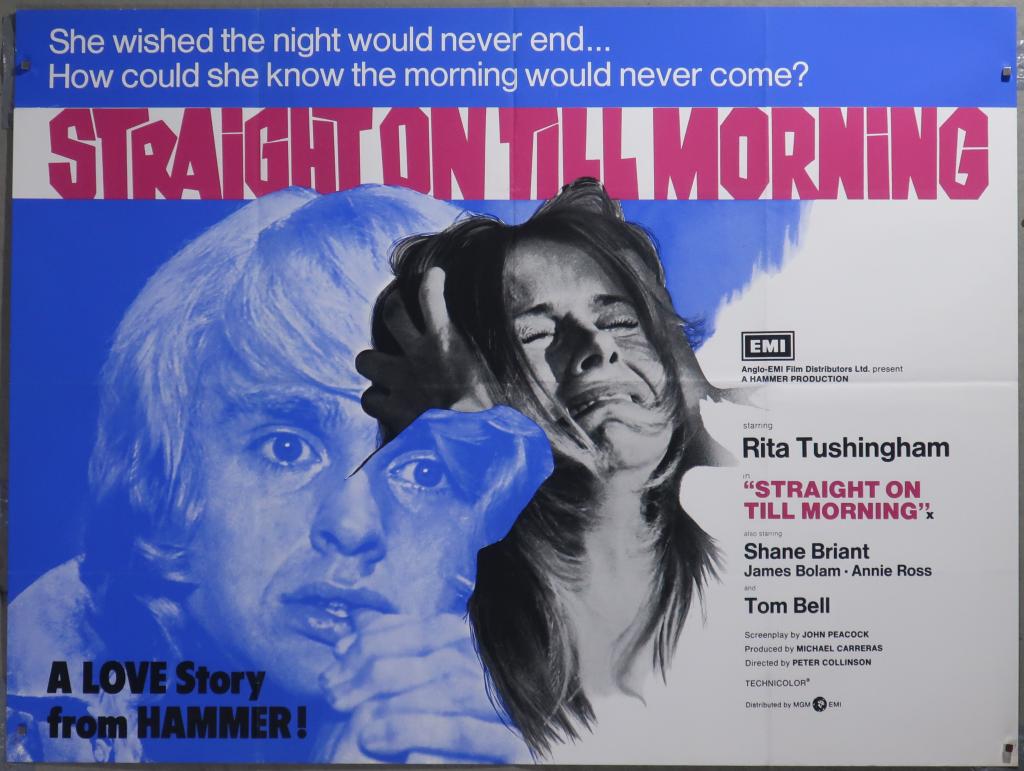 There’s a particularly harrowing scene near the end, where Peter makes Brenda listen to audio tapes of him killing, first his dog and then Caroline. It’s tough to watch – or, I guess, listen to – even now, and was likely worse at the time. This, remember, came out just a few years after the Moors Murders, with their infamous audio-taped torture of Leslie Downey. Peter’s apparent fondness for burying people in the backyard, seems to predate the modus operandi of another notorious London serial killer, Dennis Nilsen. He is genuinely scary, wielding a Stanley knife enthusiastically as his weapon of choice. [There’d end up being a Liverpool connection there too, that blade becoming a favourite of Scouse football hooligans in the eighties]

This wasn’t the first film Briant – who, sadly, passed away last month – had made for Hammer, but Demons of the Mind wasn’t released until November 1972. It was also his only leading role, which feels like a shame, as he gives a very good performance here. Straight came out in July, on an apparently commercially unsuccessful “Women in Terror” double-bill with Fear in the Night., and I think this is the superior product, despite those early mis-steps. There is a building sense of menace, and the last five minutes are as genuinely disturbing as anything in the Hammer filmography. For a portrayal of a truly toxic relationship, which is likely going to end in the destruction of both parties, it’s hard to beat.