Being perfectly honest, I fell asleep in the final quarter of this. There are some extenuating circumstances for it. I was up until 2 am last night, so was operating on considerably less sleep than usual. Still, it’s never a good thing when unconsciousness is your brain’s preferred option to watching a film. Especially when it’s in the thriller genre, it suggests the adrenaline wasn’t exactly pumping through your veins. I think the death knell was Bates’s lengthy explanation of what was going on. His voice is always quite… Well, let’s say “soothing” and leave it there. But let the record show, after the film ended, I did crank it back and re-viewed what I’d missed. Nothing three cups of espresso and some matchsticks for my eyelids couldn’t handle.

It all feels far too familiar, even if we have moved on from the mid-sixties. Then, it seemed every other Hammer movie was about a hysterical young woman, somebody was either trying to kill, drive mad or both. Now, it feels a while since the last such entry, though checking the records shows it was Crescendo, which was probably my favourite of the type. But my general disinterest in the genre remains. It was something that other studios and directors did better than Hammer, unlike the Gothic horror for which they are rightly renowned. If I wanted to watch low-rent Hitchcock knock-offs… Actually, I don’t, especially when they tend to rehash the same few elements, in slightly different ways.

The hysterical young woman in this entry is Peggy Heller (Geeson). She is recently married to schoolteacher Robert (Bates), after a whirlwind courtship of just a few months. She is a bit fragile, mentally, going to therapy for some vague psychological trauma. But matters come to a head when she’s attacked in her London home, by an unknown assailant sporting an artificial arm. Peggy faints, and when she comes round, no-one believes her. Fortunately, she’s about to leave the city anyway, and join Robert at the private school where he teaches. It’s between terms, so there are no pupils, and should provide a nice, restful location in which she can recuperate. The only other residents are headmaster Michael Carmichael (Cushing), and his wife, Molly (Collins).

Of course, it’s not as relaxing as that. It never is, in movies which possess titles like Fear in the Night. Her first encounters with both Michael and Molly are rather disconcerting. The headmaster seems to have a fetish about knots, and is more than usually interested in Peggy’s hair. He also has an artificial arm, though Peggy is initially unaware of this. Meanwhile, she first meets Molly in the nearby woods, narrowly escaping being blasted by the woman’s shotgun, as she’s out hunting rabbits [No animals were har… er, never mind. I’m sure it was a stunt rabbit, that had been trained to play dead, and was subsequently released back into the wild, to gambol and play with its pals back at the warren, with an amazing story to tell. Yes, that’s certainly what happened…]

It’s not long before Peggy is once more attacked by her unknown assailant. Then, Robert has to go back into London for a conference, leaving his wife along in their house beside the school. But it’s alright, because he gives her a shotgun for protection. What could possibly go wrong? Though she seems remarkably adept with the weapon, requiring no instruction, even though she has previously proclaimed loudly how much she “hates guns”. Over the night which follows, she finds herself unleashing both barrels at Mr. Carmichael. Robert returns, finding his wife almost catatonic, and refusing to discuss what happened, despite the presence of suspiciously sticky, red patches in both their house and the school. But if she genuinely did shoot the head-master, where has he gone?

Inevitably, things turn out to be not what they seem. The conclusion ties back to the opening sequence, which consists of a series of shots of the school grounds, finishing with one of an unknown body, swinging gently from a tree. The problem is, there are basically only four people in the movie, and so it does not take Sherlock Holmes to figure out what’s going on. That’s especially true if you’ve seen many of writer-director Sangster’s previous forays into the genre. Once you’ve worked that out, the film has little to offer, at least in terms of plotting, and you can be forgiven if your brain chooses to catch up on some much-needed sleep instead [I can be forgiven, right, folks?] 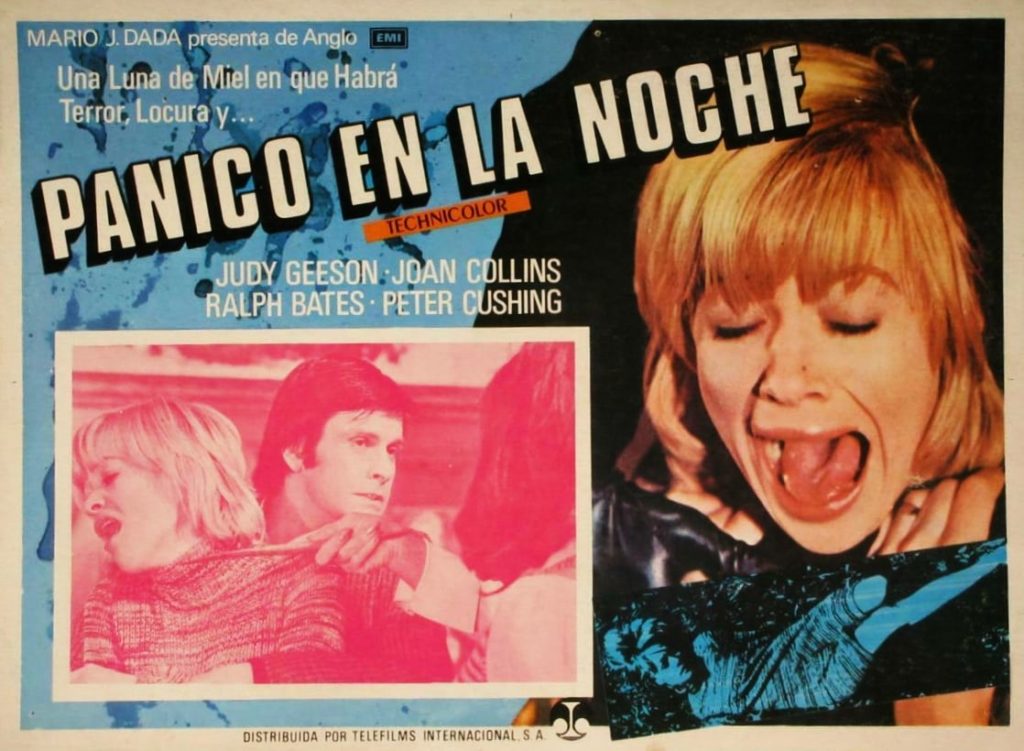 Instead, I found myself distracted by the location used for the school. Known at the time as Piggott’s Manor, shortly after filming ended, it was bought by the Beatles’ George Harrison and donated to the Hare Krishnas, who still use it as a temple, now called Bhaktivedanta Manor. The sole thing which saves the film from plummeting considerably lower are the performances, particularly by Cushing and Collins. They are off-the-wall enough to remain interesting. The script only allows Michael to interact with Peggy, which may point viewers towards a certain conclusion, though not necessarily correctly. This choice may be deliberate, or could simply be a result of Cushing only being on set for four days, for which he was paid a thousand pounds.

As that suggests, this was a cheap production, its total budget being only £114,000. It proved quite profitable, released in the UK as the lower-half of a double-bill with the not dissimilar Straight on Till Morning, in July 1972. But it was the end of Sangster’s time with Hammer, a partnership which stretched back to the forties and marked him as one of the studio’s OG’s. Outside of his psycho thrillers, he was responsible for writing many of Hammer’s classics, and his departure was another sign that things were increasingly not what they used to be for the company.