This is loosely inspired by a genuine Soviet project, the Kola Borehole, which remains the deepest man has penetrated below the surface of the planet. at about 7.6 miles down. This has been the source of various urban legends. One said they broke through to hell, and heard the sounds of tormented souls, while another had it being sealed off after finding a fossil. Neither, needless to say, are true; it got too hot to drill further, and then the Soviet Union collapsed. Both these myths, however, would perhaps have made for a more interesting than this, because it is somewhat… boring. It’s about a drill-hole, y’see? Get it? “Boring”? Get it? Look, roughly 80% of the other reviews went there. I don’t see why I should let you off. 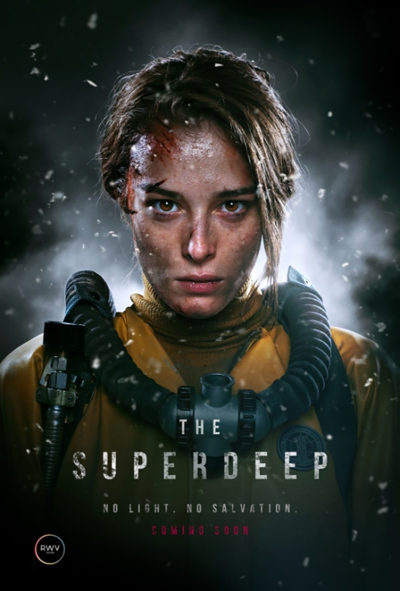 In reality, the hole was just a few inches wide, rather than the elevator shaft portrayed here, leading down to an underground complex. It’s into this that microbiologist Anya (Radulovic) is sent, after “something” unpleasant happens to the researchers down there. It plays like a Russian cross between Aliens and The Thing, with hidden agendas and unpleasant infections of unknown origins. There are certainly worse films from which to take inspiration. Unfortunately, any first-time feature director is setting their sights really high, if their script is going to invite comparisons to these classics. This doesn’t exactly come out as an improvement in most areas. In particular, characters and their motivations are muddied and unclear. It’s rarely clear what anyone wants to get out of this facility, except to get out of this facility,

Similarly, the characters  tend to blur together – with the exception of Anya, probably because she has breasts. I am fairly sure of this, since she strips down to her underwear – again, echoes of Ripley – at the end. This is… [checks notes] In order to deal with the extreme heat. Yes, that was it. Purely on its own terms though, this just about provides adequate entertainment, even if the almost two-hour running time is definitely a stretch. There are some adequately icky practical effects, and the final monster is good enough to cross eight-mile deep Russian boreholes off our list of potential holiday destinations. I also liked the sound design, and an electrodrone score that fits the mood nicely.

It might have been nice if the film had made more of the Cold War era, which is acknowledged and then discarded, the film offering not much more than an underground version of “Spam in a cabin.” I’m not sure if this Russian film was dubbed, or shot in English – it may have been a mixture of both – but that also drains away more of the movie’s sense of time and place. Finally, I find myself irrationally annoyed by the film being referred to in most places as “THE Superdeep”, when the end credits open with “Superdeep”. As opposed to “A Superdeep”, I guess.