20 years after The Blair Witch Project, and we’re still getting uninspired knock-offs? I’d not have bothered with this found footage horror film, except it was filmed in Arizona. So, y’know. State loyalty. Though I began to question that decision, when the very first shot managed to misspell “Tucson” in its caption. I should have listened to my inner voice. Here, we have five college students, who are on a project to visit ancient Indian ruins in the Coronado National Forest, east of Tucson (or “Tuscon”). The conceit is that they will get extra credit for documenting the whole trip. So they’re all on their phones, filming each other, for the duration. 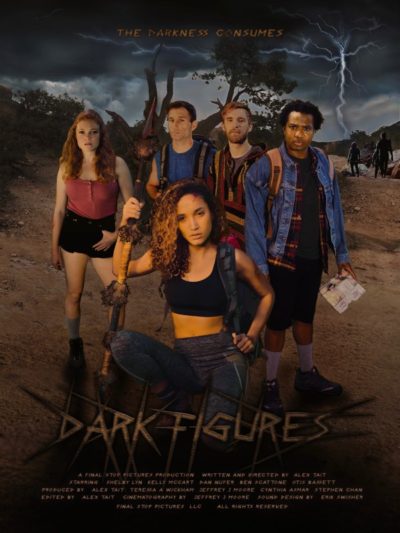 This just takes far too long to get going. There’s nothing of a horrific nature in the first half. Instead, you get extended footage of the drive to the park, which showcases the inane banter between the group, of which you’ll hear much more. Then there’s the trek from their parking spot to the ruins. This takes several days, and appears to be shown in real-time. I haven’t been so bored by a cinematic journey since 2001. By the time they eventually reached their destination, my interest was as dead and long gone as the native Americans responsible for the remains. For we’ve gone through walking, a pointless encounter with other irritating visitors, difficulty building a fire, their map accidentally getting burned, sexual tension (without any actual sex), etc. Do have to say, the scenery is rather pleasant, though summer would not be a good time to visit.

Eventually, one of the group takes a spear to the torso. At least the attackers show taste, killing the most irritating of the group. This spares us further annoying commentary about the ideal colour of your urine, I kid you not. From here on, it’s less a case of nothing happening, so much as nothing of interest happening. You’ve seen it all before. The scared monologues to camera. The increasingly shaky cinematography. And, in this case, the “shadow people”, who look like refugees from a mime convention. What they want and why, is never even remotely clear. Maybe being vacuous and boring is a capital offense in their civilization.

In any case, the group are slowly picked off over the remainder of the film, exactly as you would predict. There’s no apparent imagination at work; we are expected to be terrified at the sight of someone knocking themselves out by running into a boulder. The budget doesn’t extend to any more than the lightest gore either, so if you’re expecting Bone Tomahawk, you’ll be disappointed. Actually, you’ll be disappointed, almost regardless of any expectations. There’s no reason to get invested in the characters, and consequently no reason to care about their fate. If the “found footage” genre would get lost again, that’d be just great. The only state with which this film should be linked, is the state of unconsciousness into which the viewer will likely fall.