This is slightly different from the usual mockumentary, in that it’s roughly a 50/50 mix of the real and the staged. Half of this is a genuine documentary about the extreme edge of horror. Petty interviews well-respected academic Dr. Clover, the author of Men, Women and Chainsaws, as well as some directors working in the field of pseudo-snuff and other dark or fetish fields. They include Fred Vogel of August Underground, and Bill Zebub. But mixed in with this is Petty’s encounter with the creepy Eric Rost (Marcisak), creator of the S&Man series. These depict him stalking women – and, it’s safe to say, it doesn’t end well for them. He remains curiously reticent on the question of consent, and vaguely hand-waves away Petty’s request to talk to his “actresses”… 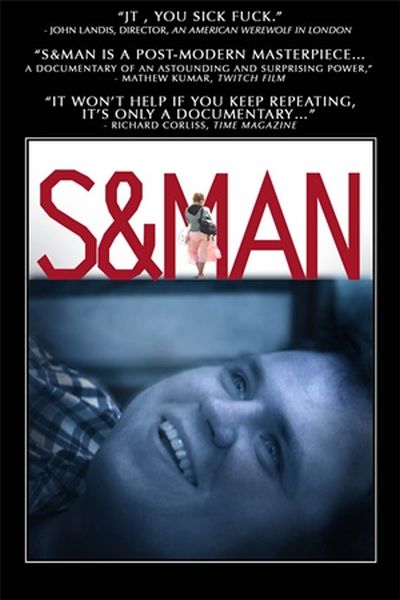 It’s a neat combination, especially as a horror fan who knows of Clover, and wrote about Zebub previously. This helps lend the rest of the film a solid air of authenticity. The problem is, I found them rather more interesting than the fictional character of Rost. Clover is clearly smart and well-spoken. Zebub is equally clearly a twisted fuck. But he’s cheerfully open about it, and he’s the kind of twisted fuck you could have a beer and a pizza with. I’d happily watch a whole doc about his process. The footage of him shooting in a local bar (which offers a Bill Zebub film for $5 if you buy a Bud!), with a clearly long-suffering and bored rigid model, is like a low-budget horror version of Spinal Tap.

“Reality” in the shape of Rost, just can’t compete with that. He does come off as somewhat weird, but the footage in his movies is thoroughly unconvincing. It’d help if he could hold the goddamn camera steady, rather than waving it about like an epileptic orangutan. His victims always meet their fate far enough away from the camera to avoid scrutiny, which is surely not what any self-respecting snuff movie maker would do. It needed more, like Petty digging into the victims, and finding out they had, indeed, disappeared. As is, there’s little or no sense of escalation, and Rost is the least interesting subject interviewed in the film.

Admittedly, I write as someone whose tolerance for “extreme” horror is fairly limited. I’ll watch it, but most of it lacks emotional impact, which can only come from artificial elements like scripting and editing. If you want a comparison, it’s the same reason I prefer the staged violence of professional wrestling to the real violence of mixed martial arts. The former has greater potential for drama, and it’s that I’m seeking. I’ve little interest in fictional violence which is trying to be real, and that is always going to cap my appreciation for this. Then there’s fictional violence pretending to be real violence, while also pretending to be fictional… I think I need a liedown.

Oh, and the title is pronounced “Sandman”. Am I the only one irritated irrationally by it?