This marks a new experience, in that it’s the first time I’ve forgotten the title of a movie while I was watching it. Seriously, Chris asked me who an actor was, and I had first to figure out the movie’s name. I could probably have worked it out, considering the title is basically an accurate description of the plot. But calling your home invasion movie, Home Invasion? I’m reminded of the ultra-generic “beer” from Repo Man. It’s not technically wrong. Just don’t expect me to remember it. 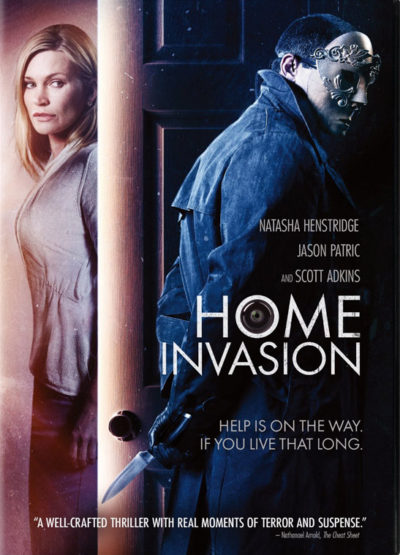 Must say, it doesn’t hang around. The titular criminal activity kicks off barely a few seconds in. Except, we then get the dreaded “Six hours earlier” caption, and have to sit through a flashback to earlier events, such as they are. Chloe (Henstridge) lives in a large house with her teenage brat. Husband is rich, but not around, for reasons left unexplained. Meanwhile, Mike (Patric) is training agents at the home security company where he is a supervisor. When three intruders led by Heflin (Adkins) arrive, they’re smart enough to intercept Chloe’s call to the cops. But not smart enough to do the same when she calls the security company. So it’s up to Mike to guide her, as a storm and the actions of Heflin’s associates, conspire to keep the police unable to respond. Meanwhile, Heflin and his crew alternate between hunting Chloe and her son, and looking for… something her husband apparently left somewhere in the house.

It’s all as painfully generic as the title, with little that will stick in the mind. I was hoping for much more when Adkins made his entrance to the house with an Italian Job reference, yet his villain is as bland and uninteresting as the rest of it. Going by the effort put in, and the sacrifices his minions are prepared to make e.g. staging a suicidal stand-off against the police, whatever he’s after is clearly very important, or valuable, or both. Yet the viewer is given no reason to care, and so our emotional investment is left sitting unopened, in the deep-freeze.

Not helping matters, the plot is enough to provoke multiple eye-rolls. Even though Heflin arrives by, literally, blowing the bloody front-door off (I mentioned the Italian Job reference), Chloe and brat spurn all opportunities to leave the house by walking through the gaping hole which results. But this is mild, compared to her “forgetting” for the first 75 minutes, that her husband owns a gun. I’ll repeat that. Her. Husband. Owns. A. Gun. If the rug-rat is right, you married him for his money, sweetheart; he clearly didn’t marry you for your brains. It’s all a painful waste of the talents of everyone involved. Except for writer Peter Sullivan, who on the basis of this nonsense, does not appear to have any significant talent to waste.