Patrick Hill (Statham) gets a job as a guard at Fortico Security, an armoured truck company. They had been the victims of an armed hold-up a few months previously, in which two employees and an unfortunate civilian were shot dead by the robbers. Hill quickly makes a name for himself, single-handedly fending off another robbery. Even more remarkably, a third such crime is abandoned as soon as the perps see his face. Is his reputation now preceding him? Or is there something more nefarious going on? Well, given this is a Guy Ritchie movie, it’s hardly a spoiler to say, why, yes – the criminal underworld is involved, thank you for asking. Turns out Hill has a connection to the first heist, and is very keen to have a chat with those who carried it out. 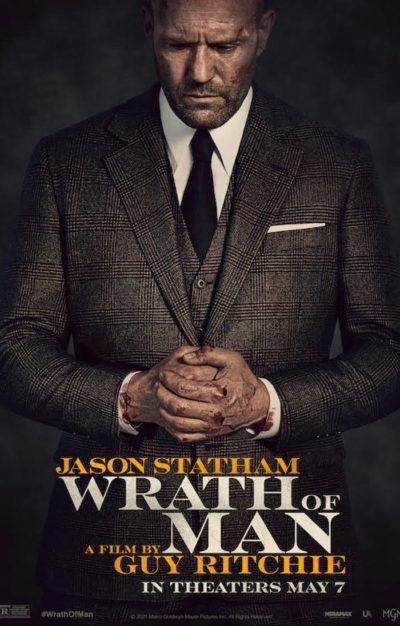 You have to stick with this one, as it’s only about half-way through that the various pieces come together and make sense. For example, we get to see the robbery from three different perspectives at various point; the guards, Hill’s, and finally, the assailants. It does also suffer a bit from split focus; at one stage, it shifts from Hill and spends considerable time with the robbers, under their ex-military leader, Jackson (Donovan). It’s a bit of a mixed blessing: while nice to see the antagonists in a film like this given background and motivation, it might have worked better if the stories had been developed in parallel. Some elements are also unnecessarily muddied: it took me some time to realize Hill was not involved in the hold-up which takes place.

I didn’t know this was a do-over of a French film, Le Convoyeur, though to what extent is unclear. The Wikipedia page for Wrath of Man calls it “loosely based on”, while the one for Le Convoyeur, goes with a rather more emphatic “remade”. Either way, it’s nice to see Ritchie and Statham back together, for the first time in over fifteen years. While this is no Snatch, it is a competently executed work, with Hill the kind of tough-guy character that’s entirely in Statham’s wheel-house. I was a little underwhelmed with the action quota though, based on the trailer. Up until the end, when Jackson tries to pull off the Big One, and Hill tries to stop him, it’s quite chatty, if admittedly, never boring.

The finale does go some way to making up for this, with a ferocious shootout between Jackson’s gang, and the Fortico employees, led by Hill. Inevitably, the last-named proves considerably harder to kill than anyone else, a bit of a deviation (per Wikipedia) from the French original. I do miss the authentically English atmosphere Ritchie brings to the best of his work. Outside of Statham, this is generic Hollywood, which feels as if it was shot in Los Angeles, for no better reason than it was conveniently nearby. The kind of film you don’t regret seeing, yet not one I can imagine anyone loving or quoting to death.