Having had enormous success with sexy vampires, in The Vampire Lovers, and having even managed to make a sexy Frankenstein’s monster (Frankenstein Created Woman), it’s probably no surprise Hammer eventually tried to make mummies sexy. Despite the title though, there aren’t any mummies in the traditional sense to be found here. The ending is about the closest this gets, and I have to say, is surprisingly effective. It does borrow elements from other mummy movies. The archeological expedition who unwittingly release evil on the world. Or the contemporary person who is the reincarnation of an ancient Egyptian figure. However, there are some twists in Christopher Wicking’s script, such as the notion some of the expedition seek to exploit the unleashed power for their own ends.

While Bram Stoker is very much best known for Dracula, he also wrote 11 other novels. They are largely forgotten, and by most opinions, rightfully so. But two did become films. The Lair of the White Worm was loosely adapted by Ken Russell, and adapted into a glorious slab of schlock, that honoured  the spirit of the original, more than its letter. Then there’s Jewel of the Seven Stars, the source for this, as well as (more or less) three other movies: The Awakening (1980), The Tomb (1986) and Bram Stoker’s Legend of the Mummy (1997). Blood appears reasonably faithful, and contains most of the elements from the book. Ok: the Wikipedia synopsis of the book. I learned my lesson from slogging through Stoker’s Lair of the White Worm. 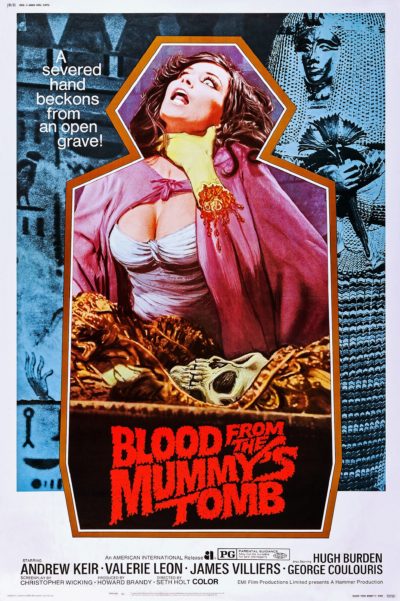 But it does also add elements, in particular upping the sexual tension. At one point, Margaret Fuchs (Leon) says, “Sometimes I think there are only two things you want me for…”. You wonder if she is addressing the makers, such is the variety of low-cut and skimpy outfits she wears here. There’s even a random shot of her eating a banana, while her boyfriend  (Edwards), sprawls on the bed next to her. It’s not exactly subtle, as symbolism goes. It must be admitted, Leon is perhaps the most beautiful of Hammer’s starlets. Though I should explain, “beautiful” isn’t necessarily the same as “pretty”, or “attractive”. Leon has a presence, similar to Ingrid Pitt, oozing sensuality even when she’s doing something banal, such as… Um, eating a banana.

Less salaciously, there is almost a Lovecraftian feel to some elements. One of the expedition members, Berigan, has been driven mad by the experience and the forbidden knowledge. He is now locked up in an asylum, which has kindly allowed him to retain a selection of Egyptian artifacts. It doesn’t end well. Mind you, his collection pales beside that of Margaret’s father, Julian Fuchs (Keir). His entire basement is packed with looted treasures. Hey, it was the seventies, when private collections of items swiped from former colonies were still perfectly acceptable. We haven’t formally reached To the Devil a Daughter in this series yet, but I feel there’s some common territory there too. In both, we have a young woman, whose mother dies after giving birth, being exploited for occult ends, by those who should know better. That includes her father, though he eventually comes to regret his participation.

I think I preferred this to the other mummy films, simply because it is a bit different – not just some guy shambling about in bandages, with his arms outstretched. Margaret has an interesting character arc, as she is slowly “taken over” by the spirit of Egyptian high priestess, Tera, and Munro pulls the transition off well. It’s almost as is she is both protagonist and antagonist, which is unusual. As noted below though, it does feel she’s operating somewhat in a vacuum. Her father would seem the most likely to work in opposition to Tera. But he spends much of the second half ill in bed, and the last-minute way in which Keir took the role (also see below) is perhaps a problem, if hardly his fault. Hammer’s final stab at the genre is a decent effort at bringing new energy to it. 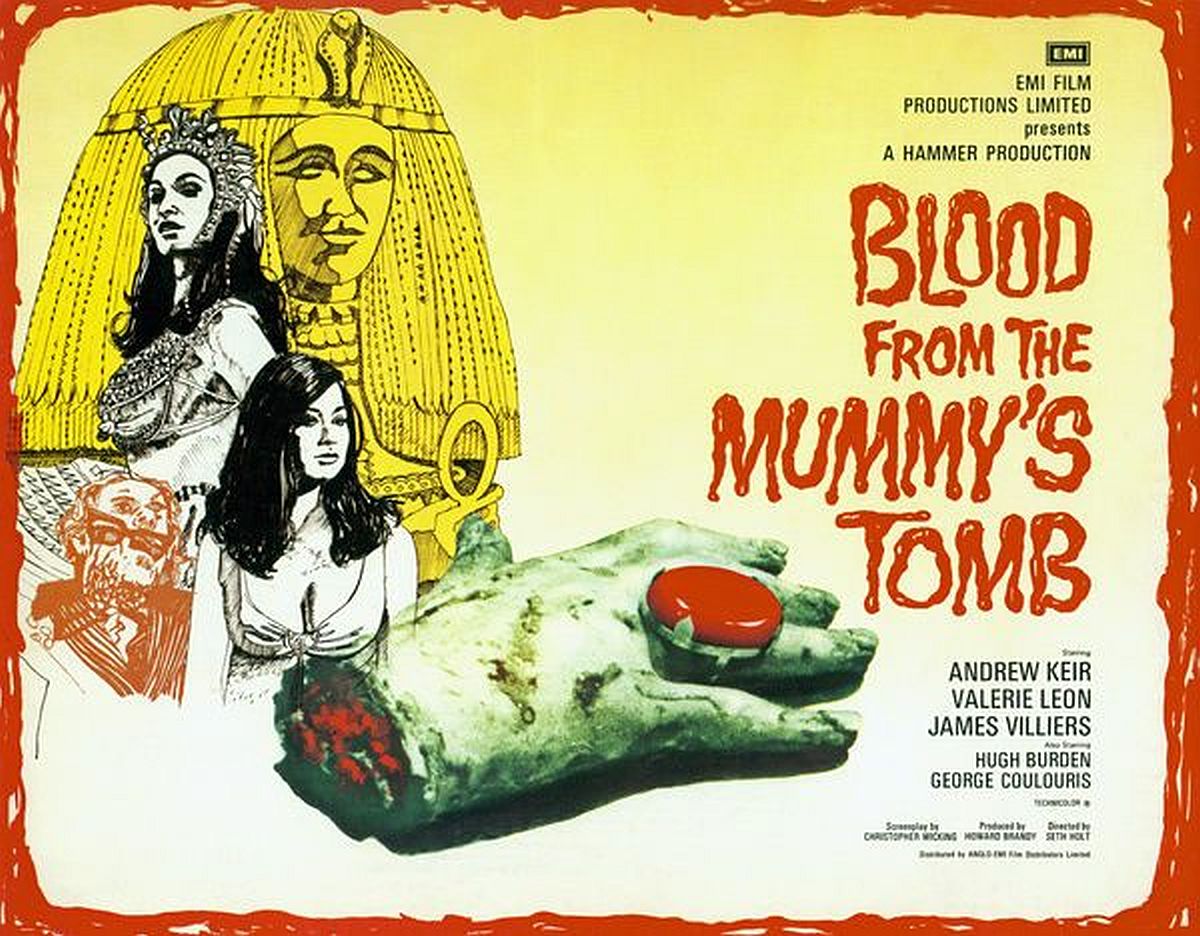 [November 2010] This was based on one of Bram Stoker’s later novels, falling about mid-way chronologically between Dracula and Lair of the White Worm, and roughly in the centre in terms of quality, I suspect. Unlike the other entries, it’s set in the contemporary era, and kicks off with Margaret Fuchs (Leon) getting a ring with an F-sized jewel in it from her Egyptologist father Prof. Fuchs (Keir), on the eve of her 21st birthday. In the street across the road, the mysterious Mr. Corbeck (Villiers) watches with interest, for the ring came from the severed hand of evil queen Tera, whose grave was found by Prof Fuchs, Corbeck and their colleagues at the precise moment Margaret’s mother was dying in childbirth. Tera’s spirit enters Margaret, and waits. The expedition return to England, each possessing a relic taken from Tara’s tomb. Now, after waiting her chance, it’s time for the queen to be fully resurrected.

I have fond memories of this from my early teenage years – in particular, Ms. Leon’s cleavage. [It was probably a mistake to mention this to Chris before viewing] Still, it can’t be denied that she does pretty well in her double-role, for someone largely consigned to playing eye-candy in the rest of her career. However, the movie never gels satisfactorily around her, perhaps because it was a somewhat troubled production. Director Holt died during filming, and Kier’s role was originally played by Peter Cushing, who left the film one day into shooting, due to his wife’s illness. That they soldiered on and finished at all is somewhat impressive, but this was the third such Hammer film I watched over one weekend, and it’s basically the same concept rolled out yet again. The only significant variation is that the vengeful mummy being nicer to look at at, and while I’m not complaining about such an approach, it wasn’t enough to sustain my interest fully for 90 minutes. C+