Where in the world is Scott Adkins? He seems to have an endearing willingness to go anywhere for a movie role. We recently saw him in Egypt, for a small role in the wartime siege film, No Surrender. Now, it’s off to the Ukraine, for a thriller in the world of espionage. At least he’s front and center in this one, and there are a few interesting wrinkles to spice up a fairly prosaic plot. You do have to get past some apparently clunky attempts to convince you parts of this were also shot in London. A few shots of buses don’t cut it in this regard. 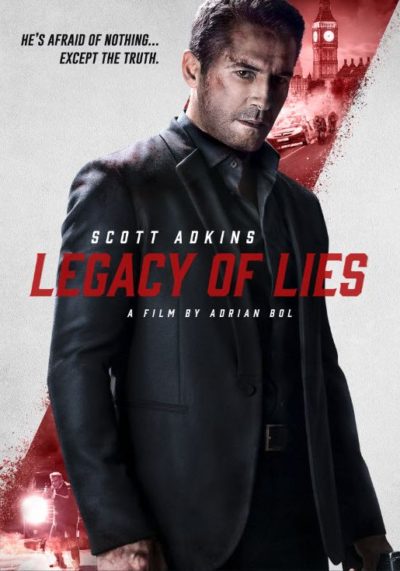 It’s better when not bothering, such as the opening gunfight in a depot of dilapidated buses. Why? It looks cool! Martin Baxter (Adkins) is there to pick up a file of documents about the Russian chemical weapons program. Only, it goes badly wrong, and his wife gets shot. 12 years later, he’s a bouncer and occasional mixed martial artist, with his daughter, Lisa (Kneafsey). He’s contacted by a Ukrainian journalist, Sasha Stepanenko (Sobol), who believes there’s another copy of the file that can be retrieved. A lot of people are not happy about this. In particular, a CIA agent (McDougall) wants in, and the Russians also request Baxter hands over to them, both the documents and the journalist. To encourage him toward that end, they abduct Lisa. She thinks Mum died in a car accident, so is in for a surprise or two.

From there, it proceeds more or less as you’d expect, Adkins cracking heads with his usual adroitness, while running round in search of the documents. Naturally, it all ends up back in Kiev, and a very similar situation to the one he faced a dozen years previously. Will the outcome be any different? No real surprises there either. Yet it all kept me entertained, not least because there’s enough effort put into developing character than normal. Even the villains are more than two-dimensional. For instance, the Russian woman tasked with watching Lisa ends up bonding with her, over pedicures plus a shared love of gambling and mixed martial arts. It’s an undeniably weird concept, yet the actresses pull it off.

Despite some efforts to make this feel contemporary, by throwing in elements such as the Novichok nerve agent, this does feel almost like a product of the Cold War era. Perhaps it’s the Ukrainian influence; the Russians pose a similar level of threat to them, as the Soviets did to the West in the eighties. But as noted above, the villains are depicted as humans, which is more than many Hollywood films of that era managed. While there’s nothing here that’s especially groundbreaking, what it does, it does quite well. Bol understands Adkins’s strengths and is willing to shoot in a way that works with them, which is not always the case either. Overall, a little better than expected.