Unsolicited DVDs sent to us for review are one of the joys of this site, and also one of the terrors. They have led to some of our all time favorite movies: however, there have also been cases where we have had to pretend we never received the movie, simply because we couldn’t find anything good at all to say about it, not even “It was largely in focus, and the dialogue was mostly audible.” Basically, it’s a crap-shoot. But when the package arrived in the mail and the… lurid, shall we say, cover-art saw the light of day, Chris’s first reaction was: “Is that porn?” I professed ignorance, and for once, genuinely did have absolutely no idea what she was talking about.

But I unleashed the Trash City crack team of researchers to investigate. Turns out Bezub has been churning out movies – both documentaries and features – from his corner of New Jersey since about 1985, and by now has put out 30 titles, some of them have made their way into mainstream outlets. These include such memorable titles as Jesus Christ, Serial Rapist, The Most Offensive Comedy Ever Made and Assmonster: The Making of a Horror Movie. It was immediately clear from these, that whatever Bezub might lack in budget and/or talent [and until we watched these, the jury was remaining out there], he certainly made up for in Troma-esque naming of his offspring.

Zebub’s preferred genres appear to be three in number [I feel like I’m drifting into Spanish Inquisition territory again]: documentaries about metal, particularly the black/death area; comedies; and horror. To quote Bill himself, “I can’t make a movie that looks like something from Hollywood. I don’t get a budget awarded to me – I pay for everything. So I provide what Hollywood can’t – racial jokes, blasphemy, gratuitous nudity, metal, and offensiveness beyond imagining.” We here at TC are thoroughly in favor of the majority of these concepts.

He didn’t sent us any representatives from his documentary output. This was probably a wise move, since Spinal Tap has ensured we will never be able to take that genre the slightest bit seriously, ever again – the trailer footage of those which was included on the DVDs largely proved that [though it seemed Bill’s tongue was somewhat close to, if not in, his cheek too]. Instead, we got Dirtbags, a remake by Zebub of his own 2002 film of the same name, and Breaking Her Will, about the kidnapping of a young woman by a sexual predator. I’ll confess, it was with some trepidation that we slipped the DVDs into the player, and sat back to see what might unfold…

[For more information on the films, and details of how to order them, please see Bill Zebub’s website.] 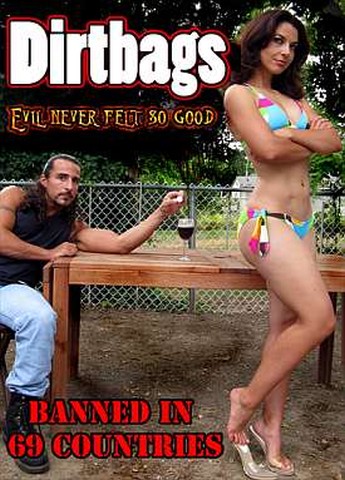 Let’s review: “Racial jokes, blasphemy, gratuitous nudity, metal, and offensiveness beyond imagining”? I think there’s little question that Bill has gone 5-for-5 there. But is certainly sharply-divided the TC viewing panel. Chris hated it with a passion: her three-word review was “That was crap,” and to be honest, I can probably see why. A lot of the content, while shocking, seems to exist solely in order to be confrontational, without a deeper purpose. For instance, dressing up in blackface and pretending to be a crack dealer could be brilliantly provocative risk-taking – if you did it on the streets of Detroit. In the living-room of a mate’s house… Not so much. The more I thought about it, the more childish it seemed, and I wonder how much actual satire was involved here. Then again, I disliked the early works of John Waters, an obvious influence.

However, I do have a higher tolerance for microbudget cinema than Chris, and when Zebub shows more creative imagination in his offensive arsenal, I will say, it was enough to make even Chris laugh out loud. [The flying tampon provoked the biggest reaction from her; personally, I preferred the miraculously-healing crosswalk sign] In terms of plot, it’s pretty loose, with a number of threads that cross paths, then head off on their own again. There’s a guy being sexually-harassed by his gay boss. Another, allergic to bee-stings, is desperate to get laid, but spends most of his time in his room, watching DVDs of girls tied, topless, to trees. Then there’s Bill (Zebub): making his way through college, one credit at a time, debating the merits of Rohypnol vs. LSD as date-rape drugs, and dedicated to stockpiling material on any girlfriends for potential future use. Yeah, as I said: pretty loose.

Likely as a result, the results are equally all over the place. At its best, this has a Clerks-like cynicism to the characters’ approach to life, that is refreshingly amoral. At its worst – such as the over-long sequences of not-particularly attractive women tied to foliage – this is simply tedious, which is the least forgiveable crime any microbudget movie can commit. However, we kept watching, and there’s no denying that the movie has a certain gonzo charm, since you just want to see what sacred cow will be pushed into the Zebub slaughterhouse next. Not for the easily-offended – in fact, probably not for the difficult to offend. However, those who are completely impossible to offend should find something of amusement here. 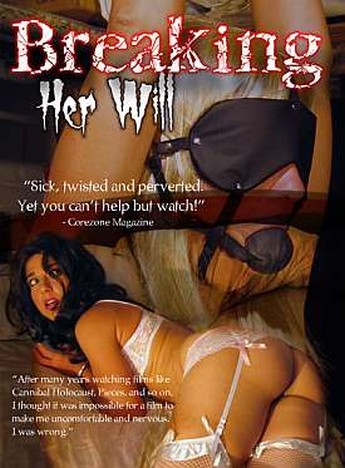 Given Chris’s comments on Dirtbags, I opted to fly solo on this one, not least because of a cover (right) that made it look more like soft-core S&M than anything. That’s doing the movie a dis-service, because it’s not what is intended at all. The opening credit is “A disturbing film by Bill Zebub,” and the director said, “If you don’t feel like you have to take a shower after seeing this movie, then the movie failed.” This is one of those films which is difficult to review, since normal standards just don’t apply. It’s not a movie meant to be “liked”. If you do, you should probably seek psychological help – and might I also suggest some form of chemical castration? Anyway, back to the film, which is a depiction of a sexual predator (Stevens) who kidnaps a woman (Rice), with the intention of converting her into his slave. The front half or so depicts this process with an unflinching eye; the rest covers what happens thereafter. There’s also more women getting faux-crucified, which seems to be a fetish of the director, perhaps more than his characters.

The main problem may be a result of the quite deliberate choice by Zebub to provide no background, in particular for the victim. While the torments inflicted on her are unpleasant, she’s barely more than a mannequin, anf that she’s gagged for much of the film only depersonalizes her further, with no “hook” on which the audience can hang their sympathies. Also, there’s a lack of insight into why the perpetrator is the way he is, which would be the other way to go [trying to make the audience empathize with a predator – now, that’d be truly trangressive]. In the middle, as part of the process, he makes up a story about how he’s part of a large, underground organization – if that had truly been the case, it might have been a more interesting route, as in the vastly more disturbing Martyrs. After lots of yelling “I am your god now!” by Stevens, things do improve somewhat in the second half, as the predator enlists his victim’s help in another abduction: will she or won’t she break her programming? The last 20 minutes are the best, as this tension helps the characters to develop, and there’s a final twist that did make me go “Hmmm.”

But did I need to take a shower afterwards? No: I was left neither shaken nor stirred, so on that basis, the movie did fail, and I can’t honestly say I have any interest in watching it again. Credit where it’s due though, particularly to Rice, in a role that leaves little to the imagination and can’t have been much fun to shoot. While less a success, this is probably more worthwhile an endeavour than Dirtbags. Zebub is to be commended, for trying to stretch himself, since this is exactly the sort of territory independent horror should tackle, things from which Hollywood should run screaming.