I feel the title of this – a film I keep confusing with The Wailing – may be one of the most inappropriate ever. It implies a movie which sits in its bedroom, listening to The Cure and writing gloomy poetry on dark coloured paper. This movie is actually dancing on a table, off its face on Colombian marching powder, and well on its way to waking up the next morning with no memory,  but in possession of a very sore sphincter. It takes place in a Taiwanese city where Jim (Zhu) and his girlfriend Kat (Lei) have just parted in the morning, after a bit of a spat over an upcoming vacation. There are concerns in the media about “Alvin”, a new disease, though that may just be fearmongering. 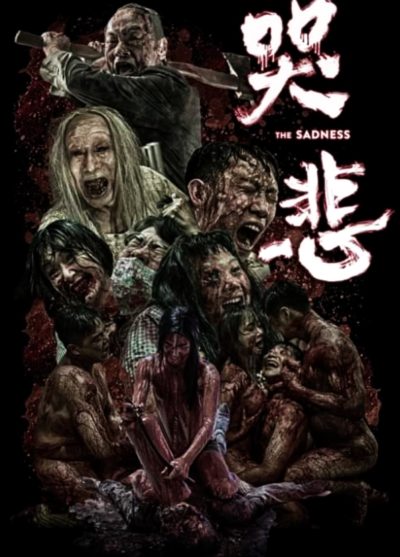 Spoiler: it’s not. It mutates, triggering unstoppable outbursts of the most horrific kind, typically involving savage violence and/or sexual aggression in the infected, against anyone in the vicinity. Kat experiences this on her train to work, and ends up seeking sanctuary in a hospital, after helping a woman (Chen), who was stabbed in the eye by an umbrella-wielding businessman (Wang). He is still in pursuit of the two ladies, with particularly vile intent. Jim tries to make his way through the city to reunite with Kat, though for obvious reasons, that’s a fraught process on its own. The path to finding each other is going to be long, red and very, very slippery.

This is certainly among the goriest films I’ve ever seen. However, where it differs from the likes of Braindead, is this is not “splatstick,” with the gore played for laughs. The Sadness is cruel, vicious and brutal gore, more in line with Cannibal Ferox in terms of mean-spirited savagery. Indeed, at points it feels as if Canadian writer-director Jabbaz had less a script, than a bullet list of atrocities he wanted to get down on film. Yet it does also make a number of extremely valid points, from current distrust of authority, to the thin veneer of modern life. Neil Gaiman once wrote, “Civilization is twenty-four hours and two meals away from barbarism.” If this movie is to be believed, add one virus to the list.

You will, however, be forgiven for not perhaps exactly contemplating the philosophical verities of this particular cinematic experience. Not when you’re watching bodies and their contents being re-arranged and redistributed, with extreme prejudice and enthusiasm. Then there’s the sex stuff, probably culminating in… Nah, I’ll leave that scene for you to discover: there are clues above though. It may not have the strong intellectual underpinnings of Martyrs, which could have elevated this to the level of a classic. Yet this provides an experience which will certainly stick with you, leaving the viewer drenched in repellent imagery, as much as Kat ends up coated in blood and brains. I’ll be quite surprised if there’s a horror movie this year which makes more of an impression.